“If Black women were free, it would mean that everyone else would have to be free since our freedom would necessitate the destruction of all the systems of oppression.” – Combahee River Collective Statement

If there’s one thing that comes through loud and clear when you’re reading Ain’t Gonna Let Nobody Turn Me Around, it’s that committing our movements to intersectionality is about more than “doing the right thing.” It’s about winning the right things. 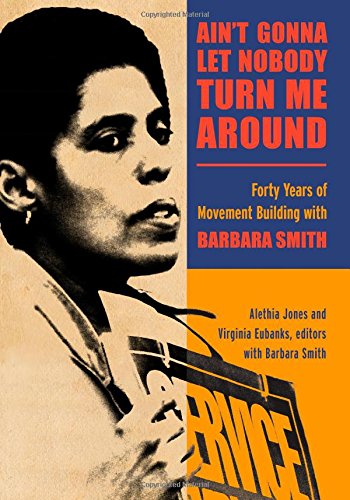 Ain’t is a 300-page volume documenting the activism of Barbara Smith, a radical and revolutionary who has spent forty years fighting for justice. Smith has surely given us a lot to document in those four decades: she was a member of the Combahee River Collective, a groundbreaking organizing coalition that first challenged us to see “interlocking oppression” as the basis of our movements; lead the founding and publishing efforts of Kitchen Table Press, which printed exclusively work by and for women of color; and successfully implemented community-based solutions to political problems when elected to state office in New York. In between, she’s done a lot of hell-raising and caused a lot of pearl-clutching — and throughout her politicized life she’s been devoted to empowerment, authenticity, and education.

As you know from our interview with her, Barbara Smith is everything.

So is this book.

I can’t recommend this work enough to anyone. I want this book taught in every classroom. I want this book scanned by every eyeball. I want these words to live in your heart and your mind forever. I want you to sit in the blue armchair in your basement reading this book and twirling your hair and challenge yourself, as I now have, to do better, be better, think smarter, work harder. I want us all to take every lesson in Ain’t to heart. It’s a book that challenges us all to dig deeper in our work and never stop pursuing actual, authentic liberation.

Ain’t is a hybrid. Part textbook, it includes rarely reprinted copies of Smith’s speeches and original writings, as well as photographs and transcribed copies of documents and organizing resources referenced in every chapter. The other part of the book is rich in storytelling: interviews between Smith and her colleagues and counterparts, both recorded originally and reprinted for the project, add context to history and make the political more personal.

What those two components show are the guarded and unguarded truths of how change happens, the humanity of a movement, and the commonalities that bring us together in movements for social justice.

The interviews dig deep. Smith counters challenges and questions with grace; she maintains positions with humility and kindness; she teaches when she tells stories. Those interviews turn Smith into the narrator of her own revolutions, and put her back in control of the herstory over which she presides. She takes credit, but shares it too; she defends her work but also spills her guts about how much more she wanted.

What Ain’t covers is immense, mostly because it’s a book tasked with covering an immense life. It follows Smith’s work from its inception to the present, showing how with each venture she applied what she had learned to expand her vision of the world. The book’s sections track, in fairly chronological order, how Smith was integral to building a Black women’s movement — whether it was through feminist activism, academia, or political maneuvering — and how her perspectives on organizing, coalition-building, and identity politics live on in burgeoning movements and the fabric of our society.

Barbara Smith is right — about feminism, about race, about intersectionality, about identity, about power, about everything. And yet, many of these concepts — and their creators — are invisible in women’s studies programs like the one that raised me. Many of these perspectives are lacking in academic settings, despite their proven applications. Too often when I read this book, I was having a revelation for the first time.

These shouldn’t be revelations. These should be the frameworks of our revolution.

Black feminism isn’t about just race. It isn’t about just gender. It’s about acknowledging and honoring difference instead of wishing it away. It’s about knowing that every struggle for equality is connected, inextricably and importantly, and that any victory that isn’t far-reaching isn’t much at all. The framework of Black feminism that Smith and her colleagues created, documented, sustained, and expanded is a framework wherein any oppression of any person means none of us are free. Beyond that revolutionary framework is Smith’s application of it, which proves that focusing on complete liberation for all people is possible.

Never were the murders of nearly a dozen black women in under six months in Boston revealed to me in my courses on how feminist activism sprouted in America. Nobody taught me that conservative politicians scapegoated — and manipulated — urban communities of color to thwart gay liberation. I was never assigned Home Girls, or Some of Us Are Brave. None of my teachers told me that Black feminism was the framework that made my life possible. It just didn’t come up.

That’s why I want you to read this book. Because Barbara Smith’s activism is immensely important, and it’s been immensely successful. Her work, along with the work of those who stood with her and in coalition with her, pushed feminist activists, Black power activists, and LGBT activists to think bigger and more critically. Her work amplified the voices of women of color, and even brought Zora Neale Hurston and Toni Morrison back to print. Her work challenged straight, white male supremacy at every turn, never sacrificing or abandoning any of her beliefs in the process.

Any feminist should be proud to follow in the path of Smith and any of her colleagues, all of whom managed, at a time when intersectionality was met with extreme resistance, to shake up the status quo and demand that social change fundamentally alter our lives. Whether Smith was rallying against patriarchy, the ruling class, racism, or heterosexism, she did so in solidarity with all oppressed people (and continues to do so!).

We can’t forget or ignore Smith. Her activism, down to the tools and practices it encompassed, are just as relevant today as they were in the 1970’s. Throughout the book, Smith is insistent that Black feminism is not “dead,” despite there being much work left to do. In fact, that framework might be the only thing left to save us all.