Donald Trump is going to become the honest-to-god President of the United States on Friday. In exchange, the universe had Keely give me my last Christmas gift and it just so happened to be a mason jar of homemade pineapple vodka and a crop top that says “I hate this.”

Many of us have spent the months since the election resisting Donald Trump and everything he stands for. Also, weeping. But the real resistance begins Friday, when the White House, Senate, and House will officially all be dominated by science-denying, bigoted, cowardly little men who call themselves “Republicans.”

Don’t give Trump a moment to get comfortable. Let’s start fucking shit up as soon as he starts being sworn in. Here’s 10 ways to resist on Inauguration Day. 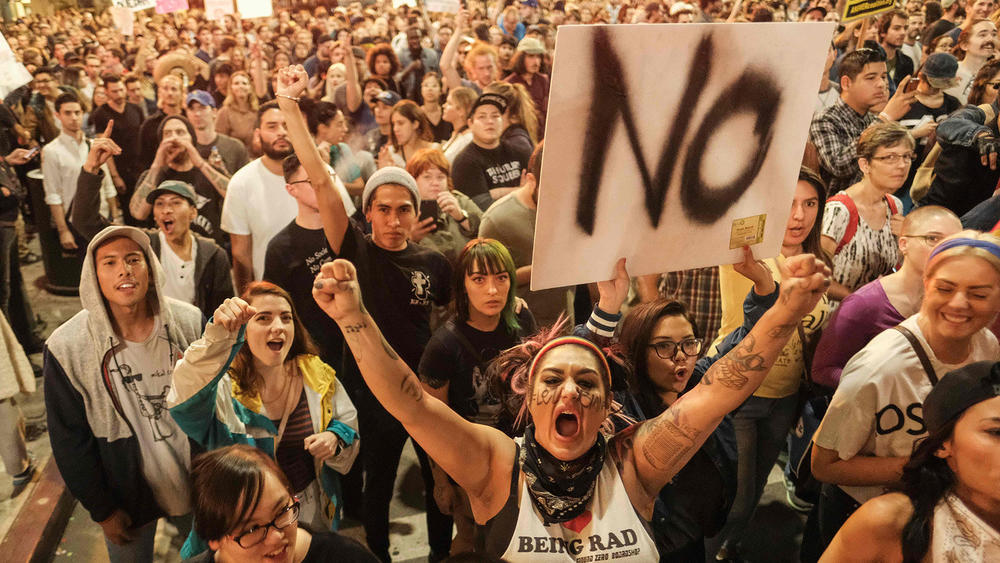 For the love of Goddess, please do not watch the Inauguration. Do not watch a live stream. Do not turn on the television. Do not watch it in a house. Do not watch it with a mouse. Watch it unfold through tweets and read the transcripts as they’re posted. Read articles about it in news outlets you trust. Do not give Donald Trump the respect of your eyes and ears in real time. Do not give him good ratings. Treat yoself and get out of the damn house instead. (Unless you live in DC. Stay inside and play Candy Crush or whatever.) If you really wanna know what’s happening, Riese & Erin will be liveblogging it for you on Autostraddle, which is all you need.

2. But Get Ready for the March!

Go to a Women’s March on Saturday if you can. Do the damn thing.

3. Give Money to Someone or Something Donald Trump Hates

Give to a feminist non-profit. Donate to your local abortion clinic. Rent a Meryl Streep movie at the woman-owned video store. I really don’t care what you do with your money, but I hope on Inauguration Day you buy some cute feminist shirts from an indie merchant and give all of your money to an activist organization, a progressive think-tank, a service organization, and/or a political organization that stands for you in Donald Trump’s name so as to make him a better person.

You won’t even have time to think about Donald Trump’s inauguration when you’re ladling soup into a bowl, cleaning up trash on the side of the road, picking up phones for a hot line, and turning yourself into a human shield outside of an abortion clinic.

5. Call Your Member of Congress About Trump’s Cabinet and Trump’s Agenda

Let your lawmakers know that you plan to watch them and hold them accountable. Use the power of your vote to pressure them through constituent activism by calling their offices in opposition to bills that would leave millions without health insurance and nominees for the Trump cabinet who would disgrace their own offices and this nation’s history. Let them know they can expect you to vote in the next election to show them you weren’t fucking around.

6. Read Up on Trump, Current Affairs, and Movement-Making

Spend the day curled up with a good book on autocracy, authoritarianism, and strategic resistance. (Here are some of my recommendations.) Or, spend the day on Twitter reading threads about his inner circle and his horrific vision for this country to prep for your next big move. Or, spend the day reading about his conflicts of interest and the potential that he is a legitimately illegitimate president so that you become prepared to tell everyone you know that information as quickly and concisely as possible every day for the next four years.

I’ve subscribed to Teen Vogue, Vanity Fair, and the Washington Post in the last three months. I’ve never been more proud to work at Ms. Autostraddle will never let you down. There’s honestly never been a better time for you to support feminist, progressive, and/or — preferably and! —independent media. We need them. We need people to tell the truth. We need people to make us laugh. We need someone to remember us.

8. Talk to Someone IRL About How Much Donald Trump Sucks

Have a difficult conversation on Friday about Donald Trump with a sad and broken person who voted for Trump. Destroy them.