The following books fall mostly under #1 and #2, with a little non-fiction and a lot of lesbians and queer people thrown in for good measure. 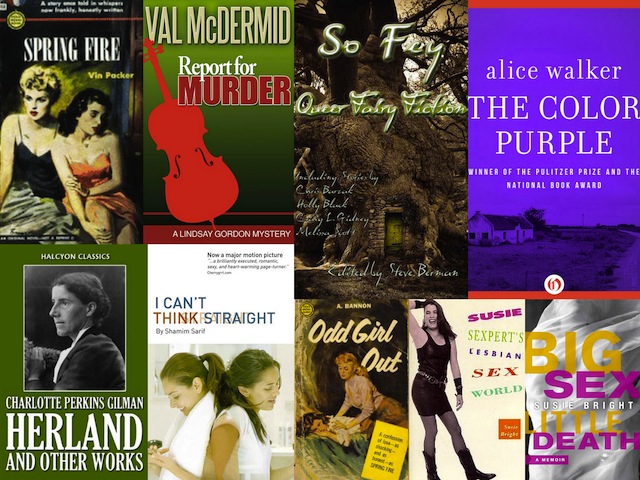 Odd Girl Out, by Ann Bannon

Ann Bannon’s Odd Girl Out and two of its sequels, I Am a Woman and Women in the Shadows, are all $1 each. If you read about her for Herstory Month but don’t want to invest in the paperbacks, these versions are an excellent decision.

Spring Fire is widely recognized as the first real lesbian pulp fiction book, and inspired Ann Bannon, not to mention the rest of the genre. (Though if you’re willing to go up to six or seven dollars there is SO MUCH lesbian pulp fiction appearing on Amazon, like Twilight Girl, These Curious Pleasures, The Sex Between, In The Shadows, and Three Women.)

Before it was a movie, it was a novel. If you want to picture Tala as Lisa Ray and Leyla as Sheetal Sheth anyway, though, no one will blame you.

Herland and Other Works, by Charlotte Perkins Gilman

Herland is about a utopian country of women that live and reproduce sans men. There is a weird male-gaze element since the narrator is a male sociologist with two buddies and very objectifying views of women, but the entire book is about the social construction of gender roles, which is pretty neat. (Ammonite, by Nicole Griffith, is a modern sci-fi adaptation. It is not under $5, but it is worth it.).

The Color Purple, by Alice Walker

There is no reason to not read this book.

Report for Murder, by Val McDermid

Report for Murder is the first in a series about “cynical socialist lesbian feminist journalist” slash detective Lindsay Gordon.

Carolyn has written 983 articles for us.