One of the most demoralizing things about the 2016 presidential election was the perpetual, year-long reminder that a brilliant, accomplished woman giving nuanced explanations about complicated issues can’t hold America’s (or the media’s) attention the way a braggadocious, simple-minded man can with 140 characters. We don’t want context, history, expertise; we want a Hunger Games-style bloodbath we can understand and react to in a single tweet. Sad! Bad! Mad! And we proved it again on Tuesday night when Rachel Maddow accomplished something no journalist on earth had previously been able to do: She revealed a Trump tax return, a two-page 1040 from 2005.

She did it the Maddow way, by pulling on a bunch of strings — here’s evidence a Russian operative dumped money into Trump’s lap, here’s evidence that same Russian operative is meeting with a top GOP fundraiser, here’s evidence Trump and his family are beholden to other foreign governments, here’s what having his tax returns would actually show us, here’s a reminder Trump’s refusal to release his returns is not normal, here’s a weird peripheral tie-in that made me laugh — before handing over a bouquet of balloons to her viewers. This is her enduring style. Her 2012 book Drift, which explores the growing power of the executive branch through the unmooring of the American military, begins with an eight-page prologue about the “Andy Griffith-esque” public safety complex in her tiny Hampshire County, MA town. Before she tells you her conclusion, she tells you why her conclusion should matter to you. It’s her entire brand.

So why is the internet eviscerating her today? Why are dozens of reporters and websites and hundreds of thousands of (left and right wing) commenters and tweeters piling on her? Because in the hour between her tweet promising a Trump tax return and her reveal of said tax return, the media and the masses whipped themselves up into a feeding frenzy. They wanted the Trump killshot she had never promised and when, instead, Maddow delivered a body blow — like the hundreds of body blows Bob Woodward and Carl Bernstein delivered to the Nixon Administration leading up to his impeachment over Watergate — they turned on her.

The issue is, in part, the circus into which our political and reporting process has devolved. And the fact that what sticks is what’s retweetable. But there’s no way to look at this backlash without seeing blatant sexism and homophobia.

Almost as soon as Maddow’s tweet landed, people began to question how big her scoop could be, really, if NBC News proper wasn’t breaking the story. The implication being, of course, that Brian Williams should deliver the message to the American people if it was important. After all, despite Maddow consistently being NBC’s most watched reporter, despite the fact that she’s never suffered a journalism disgrace, despite the fact that she is the go-to liberal political voice in this country, she had to share the anchor seat during the 2016 election with Williams, an optic that became a metaphor for the election: America would rather trust a white guy with a bombshell scandal under his belt than the smartest woman in the room.

It’s also hard to find a social media stream or comment section that isn’t deriding Maddow for being a masculine-of-center lesbian as much as her method of reporting. That’s nothing new. Every time Maddow makes headlines outside of liberal circles, the homophobia hurled at her is relentless. For example, enjoy these comments from a Mediaite post about Maddow calling out Trump for “blatantly, overtly, bluntly, simply” lying about Russia. 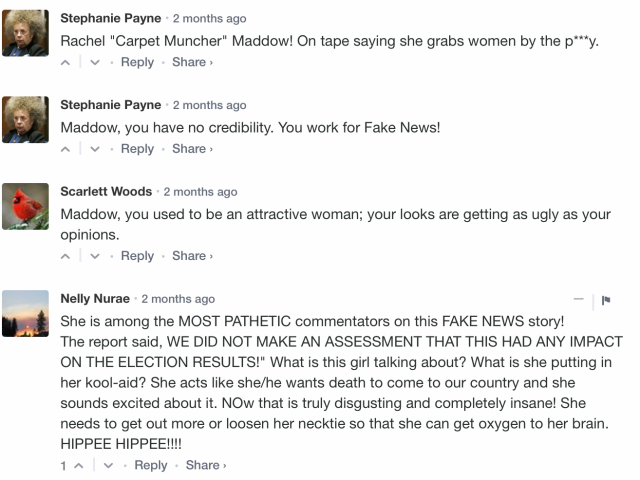 Rachel Maddow didn’t take a torch to the White House last night and oust Donald Trump from the West Wing with her bare hands, but here’s what she did accomplish: She proved it is possible to get Donald Trump’s tax returns. She proved the White House does, in fact, have Trump’s returns handy and that they’re perfectly capable of handing them over; they demonstrated it by releasing a statement with exact numbers not long after Maddow’s tweet. By making those numbers public, the White House shattered the lie that Trump cannot release his returns until his “audit” is complete. She proved it’s not just journalists who care about Trump’s returns, which has been the post-campaign refrain of every White House spokesperson. And she shined a glaring light on the fact that Trump is trying to push through “tax reform” — specifically, getting rid of the Alternative Minimum Tax — that provides no relief to the poor and middle class but allows him to pay an income tax rate of around 4%. Four percent, y’all. Americans who make less than $18,500 a year pay ten percent.

Maddow also no doubt contributed to the culture of paranoia that has gripped the Trump administration and continues to cause chaos in the White House. Just today, in fact, Politico released a report citing senior officials who said the “degree of suspicion” cultivated by media leaks has “created a [West Wing] toxicity that is unsustainable.” It was this paranoia and suspicion Maddow purposefully stoked in her opening last night. After explaining in detail why it is imperative to see Trump’s returns, she made pointed hand gestures while staring straight through the camera and saying, “That’s why there will be unrelenting pressure to find Donald Trump’s tax returns, to expose Donald Trump’s tax returns, and that pressure will remain every single day he remains president. Unless and until he releases them, the pressure will never let up.”

Last night, Rachel Maddow proved what she set out to prove, and, in the process, she laid bare another reminder that America prefers asinine bluster over brilliant women.