I am not familiar with certain corners of the internet and, full disclosure, sometimes I’m even a little scared of them. However, I am also an intrepid journalist who would follow Rachel Maddow anywhere. Even to Reddit. So that’s where I was at 11:00 A.M. when she drew that little robot guy on a whiteboard and proceeded to squeeze out some of her mind grapes for us, in Verdana. 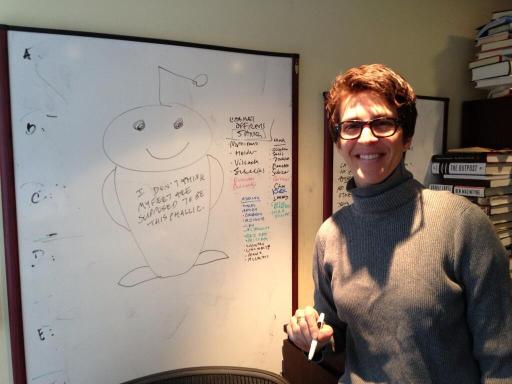 A Reddit “Ask Me Anything,” or AMA, is a crowdsourced interview with a famous or interesting person — other recent subjects include everyone from Michael Bolton to the developers of StarCraft II. Anyone can submit a question, and the subject chooses which ones he or she wants to answer. Other readers help curate the discussion by upvoting and downvoting questions. I’m happy to report that even those of us who have already watched and listened to (and gazed at) Maddow a lot will probably be able to learn at least one thing from this particular Q&A. Right off the bat she reminded us why, besides being a great pundit/anchor/Famous Gay Person, she is a great Friday date — because she is able and willing to talk with equal fluency about her interests, her life, and her job.  And because she smooths things out with a drink first. Exhibit A: the first set of questions she chose:

NICE TRY ON #2, BUT YOU SHOULD HAVE SAID “IT WAS THIIIIIS BIG” AND THEN STRETCHED YOUR ARM AROUND US

This set the tone for the rest of the Q&A, which was about four parts newsy and political, two parts personal, and one part Internet (plus one troll garnish which Rachel forgot not to eat). News-wise, Maddow wishes more people would cover Afghanistan (“it’s not done, there are still real decisions to be made, and it’s still life and death”) and that she had gotten to be on the beat for the presidential election of 1800 (“A tie! Decided in Congress! Aaron Burr!”). She’s got some insight into the push-pull forces within the Democratic party:

SaturatedPhats:
“We all know about the internal issues of the GOP, but what do you see as the major conflicts within the DNC and liberals?”
_Maddow_:
“The big one, I think, with Dems in control at the WH and the Senate, is that liberals are always calibrating how much they want to push Dems from the left, and how much they want to support Dems against the Reps. The weaker and more confused the Reps are, the more free I think liberals feel to push the Dems on policy. Broadly speaking, I think the conservative movement thinks about its own future on longer horizons than the liberals do.” 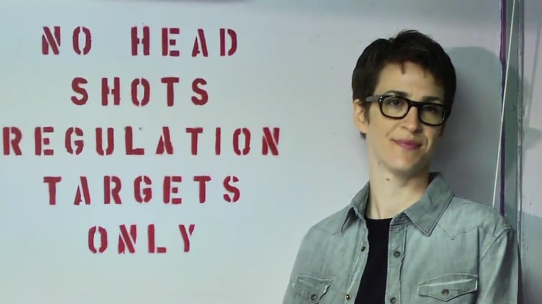 She likes guns AND gun reform (“gun appreciation, even gun enthusiasm (which I confess to in a small way!) is absolutely not inconsistent with a belief in rational gun-safety reform.” She also likes Black Flag AND Hüsker Dü, which is perhaps not as rare, but is equally cool. She puts her socks on before her pants (clearly no one has told her it’s underwear week, as she failed to elaborate on the other steps involved). She would rather fight a horse-sized duck than one hundred duck-sized horses, and, sadly, she is never ever, ever running for office. But she thinks you should.

If you’d like to wade through the whole thing yourself, and check out some of the questions our favorite pundit decided NOT to answer, you can do so here! And if you need a cocktail afterwards, Hansen’s got your back.