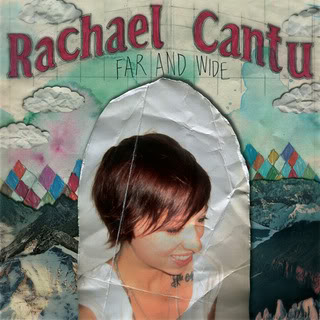 Even if you haven’t listened to Rachael Cantu‘s music on repeat in your bed for ten days, as we have, it’s likely you’ve already heard her name, as we did. And after you listen to her newest album you’ll be (as we are) fully obsessed with her voice, her feelings, and her sweet-but-smoky vocal adventures.

This Southern Californian singer/songwriter has drawn comparisons to artists like Chrissie Hynde, Bjork and PJ Harvey, and has built a loyal widespread fan-base through captivating solo shows and North American tours with powerhouses like Tegan & Sara, Pat Benatar, B.B. King and even my bro Ben Lee.

This month Rachael has released Far and Wide, her second studio album created with Canadian producer Futcher and indie engines like Tegan Quin, Ted Gowans and Charla McCutcheon to name a few. The album’s already received some rave reviews, some of its tracks already receiving airtime on my favourite tv guilty pleasure, Private Practice.

Having recently completed the Rachael Cantu crash course, I’ve discovered that Rachael and I are destined to be soul-mates or at least Twitter friends because Green Day’s Dookie was the first CD we both purchased ourselves.

I had the chance to ask Sweet Sweet Rachael Cantu some hard-hitting questions about her new record and music-related spending habits over the jump.

But first! Intern Emily and I are going to share our feelings about this new record.

Crystal: The number of solo singer/songwriters that I listen to can be counted on one hand, a fact that made me initially believe I might not be the best team member to review this album. However Rachael’s reputation precedes her, and this was enough for me to put on the record and give Far and Wide a go. I tell you, it would have been a shame if I hadn’t.

“Far and Wide is an acoustic indie rock/pop/ sometimes folk record by a girl with a guitar, grace and feelings that we can all get down with.”

Far and Wide is an acoustic indie rock/pop/sometimes folk record by a girl with a guitar, grace and feelings that we can all get down with. Rachael’s powerful, sweet-but-smokey vocal style is complemented nicely by hooky melodies and arrangements, familiar enough to consume effortlessly and refreshing enough to stick in my head and demand repeat performances. I’m not going to break this album down too much, but if you’ve heard it then you might agree that the atmospheric, somewhat eerie “Devil’s Thunder” is a killer way to kick it off. It sets the stage for what you may assume would be a moody, darker album, and yet instead what follows are 9 optimistic, upbeat toe-tappin’ tracks, notably “Thieves and Their Hands” and “Hips are Bad” which are downright contagious.

Overall the record is well-produced and the tracks are well-composed, although at times I feel there a moments of restraint, that parts will build but never peak. Still, if you’re a fan of this genre then you won’t be disappointed. I like to rate records by the number of tracks in which I can remember the line or hook that comes next, and Far and Wide gave me 7 out of 10. It’s an enjoyable, respectable album, go on and give it a go.

Far and Wide is available internationally through iTunes now. Or if you’re the more sentimental type, order the physical album via Rachael’s myspace knowing that as an independent artist she has likely packaged and shipped it to you herself with the greatest amount of tender loving care. 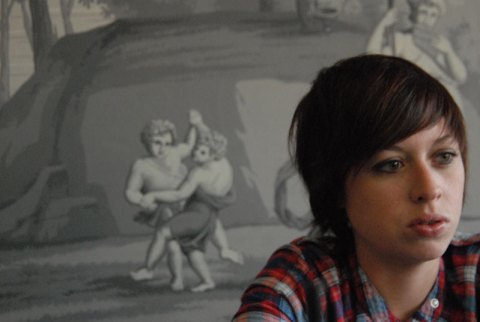 Far and Wide is chock full of catchy melodies and strange lyrics. Rachael references Quebec which is the province I live in and sort of surprising to me. “Devil’s Thunder“, the opening track, begins with a strong, near- a capella vocal “Oh Lord, have mercy on me” supported only by faint church organ sounds, which immediately made me think of Jesus and how much I didn’t think I could handle a whole record of Christian indie rock. Thankfully that didn’t end up being an issue, and now “Devil’s Thunder” is my favorite track on the album. The rest of the tracks are not as polished, but sometimes it’s nice to not listen to super polished music. Again, it’s like sitting around a campfire. It’s cosy.

“My feelings are that this record feels familiar, it feels homey, like we’re all sitting around a campfire being friends.”

This is a great record to listen to in the morning because it’s so optimistic. It makes me feel like I can face the day! “Far and Wide” [the title track] and “Make a Name for Me and You” are two really catchy tunes that make me a bit sentimental. On “Far and Wide“, the way Rachael sings “we’re all packed my dear, just waiting for the train to appear” makes me feel like the whole world is open and waiting for us. The lyrics are simple and easy to relate to. We both need a little bit of peace, I could use a little bit of sleep. Srsly.

One of the great things about Far and Wide is its optimism. On “We’re the Rebels” Rachael asks, “if you don’t know then you don’t dare, who will ever know that we’ve been here?”. I ask myself this everyday when I think no-one will ever read anything I write, and this record is almost a challenge to see how much I/we can accomplish. Dream big. Go far and wide to make a name for me and you.

Highlights include: “Make a Name for Me and You” and “Thieves and Their Hands“.

Click over the jump for the Rachael Cantu interview!