feature image is a still from “Land” by Lares Feliciano

It hadn’t been an easy year. Fall followed a blistered summer, where I was broker than ever and drunk on the beach. The summer heat sweated out of a fevered spring full of recklessness and self-abandon. I gnawed away at the roots of myself. The spring had come after the worst of it: in the blinding depths of the endless winter, I thought I would disappear, maybe for good.

Something I had believed in no longer was, and I couldn’t move past it. Nobody likes a breakup. But I had to move past it, with or without the help of the community I had found and lost.

The entire day while I waited to leave for Queer Rebels’ ANCIENT FUTURE, I felt the distinct presence of terror inside me, despite having seen them multiple times before. I wasn’t just going to see films that night, I was going to see fucking everyone at this show, whether or not I was ready for it. I just couldn’t do it, but I had to.

MIX NYC is a really special thing for queers in Brooklyn. It’s a week-long experimental film showcase that takes place inside a giant art installation, which more often than not features something gauzy and womb-like. There are parties every night. People wake up at the Mix Hive. It’s fucking magic, and for many queer people of color, the Queer Rebels night is the best of it all. I had to go. 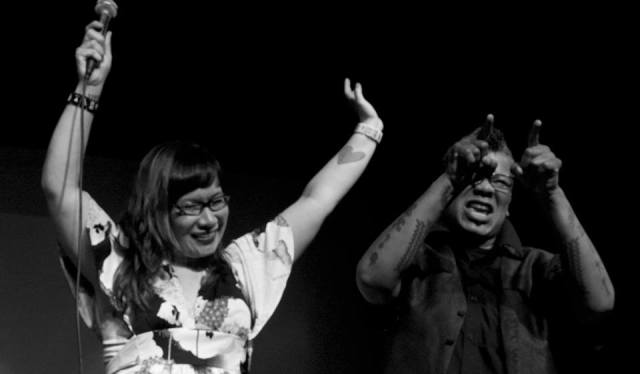 Founded in 2008, the Queer Rebels are a West Coast dynamic duo made up of performance artist KB Boyce and visual artist Celeste Chan. They showcase queer artists of color with an emphasis on intergenerational artistic legacy. Their selection this year was titled the ANCIENT FUTURE.

Drawing inspiration from the ancestors and projecting it into a future where we’ll live forever, the Queer Rebels curated a selection of nine short films that ranged from a full-moon escape through the Iranian desert to psychedelic music videos featuring women of color and back to an abstract contemplation of apocalypse vs. rebirth. ANCIENT FUTUREs revolves around the idea that the future is not only ours to inherit, but ours to create.

In the East Coast premiere of their collection, the Queer Rebels quote the late José Esteban Muñoz, whose work on queer futurity is some of the most groundbreaking, boundary-pushing, comprehensive work on the subject to date. In his introduction to Cruising Utopia, he says, “We must dream and enact new and better pleasures, other ways of being in the world, and ultimately new worlds. Queerness is that thing that lets us feel that this world is not enough, that indeed something is missing.” But what is it that’s missing? That’s what we’re asked to sit with as the lights go low and the films begin.

Forming and finding community can be terrifying, especially for those of us with multiple intersecting identities. There’s a lot at stake — so much to gain but just as much to lose. And so there’s a special feeling for being rejected by people who claim to be a part of you, and you a part of them. In white queer communities, I felt unseen. In this queer community of color, I felt seen but unheard. I felt that community had been discovered, claimed, conquered, owned. A new social hierarchy had arisen, and we called it separatism. A line had been drawn around it, a skyscraping metropolis built in the center, and I was on the outskirts, alone, pressed against the barbed border, not good enough, not brown enough, quiet again. In biological families, we are not bound by blood; in QPOC identities, we are not bound by flesh. Shared identities do not make us one. At best, they make us “other,” together. And that’s where we were then. Was this community? Is this what was missing? I sat in the audience, surrounded by strangers or friends. 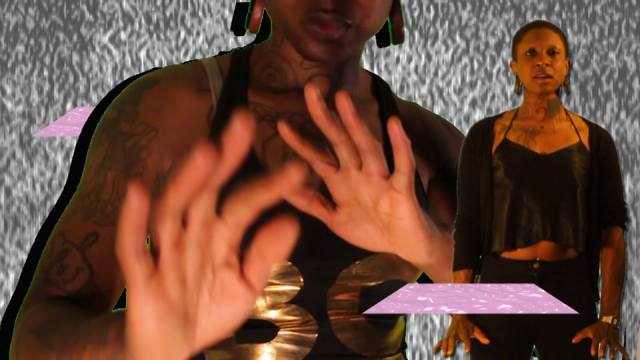 Still from “Keep It In, Keep It Out” by Wizard Apprentice

In ANCIENT FUTUREs, we see queers shaping their own realities. It’s a vulnerable moment to have in such a public place. It is anxiety-inducing and paralyzing. It is exhilarating, rewarding, life-giving, but in the end, it is a risk. In the feature’s two music videos, “Keep It In, Keep It Out” and  “Molten Tea,” the creators, Wizard Apprentice and Laura Kim, respectively, not only dare to thrust their images into the glitched-out futurescape, they replicate these images over and over again, populating the scenery with infinite visions of themselves, a far cry from POC erasure everywhere else. This is the queer future. We’re not waiting for it, we’re building it. It’s already here in the ways that we dream. I grew more comfortable in my seat. I was scared, but I wasn’t alone. I couldn’t forget that I had come with the people I loved and who loved me, even if that love was nearly impossible to accept in this last long year.

In Lares Feliciano’s “Land,” the narrators are forsaking their claim over the planet, traversing the desert alone, and abandoning the worlds that have tried so hard to erase them. It’s a different kind of separatism, one that relies less on exclusion and more on agency. It’s solitude as a choice, an escape from a colonized planet, a fresh start with the land. Is this a future that we’re allowed to imagine? And if not, what’s holding us back? It’s not that hard to see what’s stopping us.

This world was not built for our survival. As queer people of color, we hardly see ourselves in visions of the future. We’re disappeared from TV, movies, even books — replaced with glowing white bodies. We see images of mankind traveling across galaxies, traversing space and time, forging interstellar imperial war on planets with seven moons, rivers of molten steel, flowers that grow in the absence of water, and somehow, no brown people. 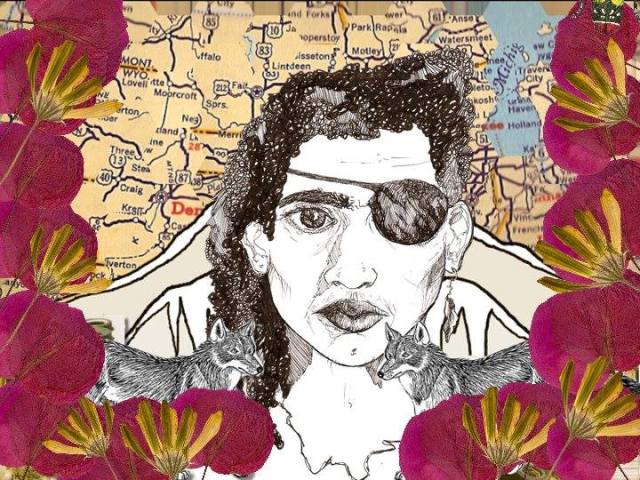 Still from “Land” by Lares Feliciano

Michael Chabon has an essay about this giant clock that Brian Eno is building where he claims that the future is no longer something that we worry about, that we spend creative time envisioning, that we insist on. The future, he claims, is a concept that we no longer consider. But don’t we? There are two big reasons why you’d never consider the future: because you’ve always taken it for granted, or because it was never promised you to begin with. ANCIENT FUTURE hits that concept hard and doesn’t attempt to put forth an answer. That’s our job.

In “Finding Home,” Celeste Chan bears witness to a painful histories, stories that would be fully and aggressively wiped from our minds, classrooms, and consciousness were it not for our elders who remained to tell the tales. We see the risks that other queers have had to take to ensure that we can live, even if we continue to struggle. For many of us, the world is unkind. So little is promised to us, not wealth, not safety, not a home, not soundness of mind, and certainly not the future. This is a queer inheritance. But fortunately so is resistance. Believing deeply in a future when yours is threatened is an act of resistance. Not just any future with a house and a job and a marriage, but a future that’s something radically different.

ANCIENT FUTUREs closes with “We Are Mangoes,” by Jeepneys and Low Leaf, depicting a celebratory dance that transcends space and time. We find our two protagonists reveling in a vivid abundance of wildlife and in the company of each other, eventually donning masks that are not for hiding but for exploring an infinite number of identities that are not only imagined but actualized.

By the time the lights came up, I remembered how much I wasn’t alone. In that blinding endless winter where I thought I would disappear, I didn’t. I had survived it, and I hadn’t survived it alone. My people, queers of color, were out in the world manipulating film, video, colors and distorted sound to project possibility into the atmosphere, to plant visions of the future into the chests and hearts of all us watching. In Muñoz’s work, I read about the concepts of the not-yet-here, the things that were to become, the possibilities being built on our very survival. In his work and in the work of queer filmmakers at MixFest, I saw the something that I didn’t realize was missing: the future. 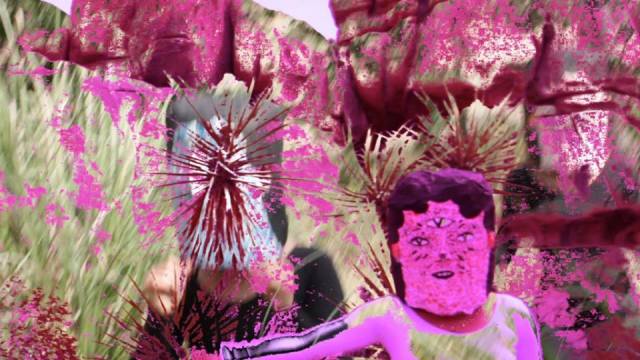 Still from “We Are Mangoes” by Jeepneys and Lowleaf

In ANCIENT FUTURE, not very much is shocking or spectacular or inconceivable: it’s much, much better than that. It’s familiar. What we see is beautiful in its familiarity because we engage in these imaginations every day. We see the risks that other queers have had to take to ensure that we can live, even if we continue to struggle. The not-so-ancient wisdom of our ancestors’ survival builds every moment of our present, and in this present, we are gifted, we are magic — we don’t just see the future, we make it.

Want more Queer Rebels? They’ve just been invited to present ANCIENT FUTURE at the first ever OUTsider Festival in Austin, TX from February 18-22.

On May 28-29, they’ll be launching another first, the Queer Rebels Fest. The event will consist of two days of performance, films, and multidisciplinary arts by queer and trans artists of color. The theme is “connection,” where they and several other artists will be looking at spaces of tension and solidary between and amongst communities of color.