Halfway through Kayleigh Llewellyn‘s In My Skin, our protagonist Bethan finds herself talking to her lesbian gym teacher. “If you are struggling with your sexuality, it’ll fall into place,” the teacher offers in comfort.

Bethan is a Welsh 16-year-old trying as hard as possible to make it through each day. Her mom has bipolar one and her dad oscillates between neglect and abuse. The care of Bethan’s mom is on Bethan and as if that weren’t difficult enough she’s also committed to keeping it all a secret. She casually lies to teachers, her crush, and even her closest friends about her home life crafting her vision of a perfect upper middle class existence. 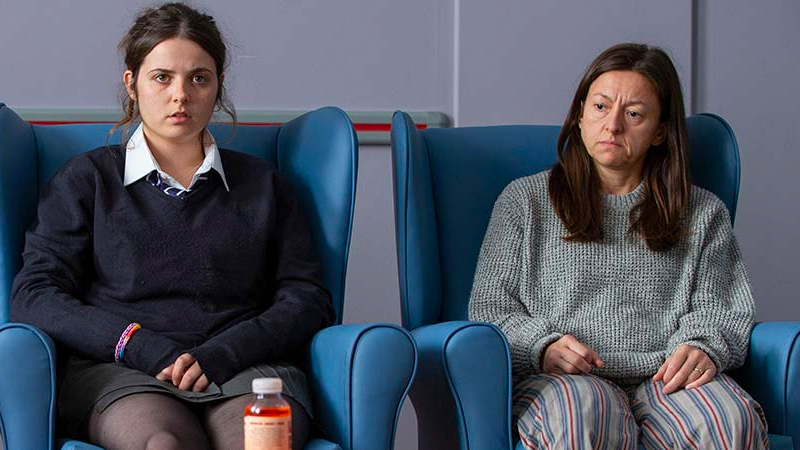 This is a difficult show. But what separates it from other difficult queer narratives is that Bethan’s queerness isn’t a point of trauma, but her escape. When the show is at its best it presents a crush, a flirt, a kiss as a point of joy amidst all the suffering. After a century of queer trauma on screen, many audiences are hungry for happiness, but that’s not the only way to subvert the usual narrative. Queer people — being people, after all — experience all sorts of painful experiences separate from our queerness and we deserve to see that on screen too.

Bethan lies in bed with her crush — overwhelmed, confused, excited. But she’s not allowed the usual ease of queer adolescent anxiety. Her biggest fear is not that her crush won’t like her back — or that she will — but rather that her mom isn’t safe home alone with her dad. When is she allowed to just be a teenager? When is she allowed to indulge in her own desires? What’s it like to be a teenager who is forced to parent your parents?

Gabrielle Creevy is remarkable as Bethan. She’s funny and charming and feels grounded in a teen angst that has to deal with so much more. There’s never a doubt about why Bethan doesn’t ask for help because Creevy expresses her defenses and her shame with such depth. Her performance also regularly adds brevity to the series which keeps it watchable and makes the harsher moments all the more heartbreaking.

In My Skin’s successes make its missteps all the more frustrating — primarily the show’s treatment of Bethan’s crush, Poppy (Zadeiah Campbell-Davies). We’re first introduced to Poppy as she leads a crew of mean girls and Bethan’s best friend calls her a cunt. Poppy’s initial interest in Bethan seems motivated only by Bethan winning the school poetry contest and the accompanying clout Bethan receives. Anyone with any knowledge of being a queer teenager or watching queer coming-of-age stories will cringe as Bethan seemingly falls for this straight popular girl.

But then there’s a shift. Maybe Campbell-Davies gives too layered of a performance or the actresses have too much chemistry or I simply wanted the show to be something it isn’t. But I found myself interested in Poppy and her own confused queerness. I found myself wanting this bright spot in a dark show to be granted the complexity it deserved. It’s not a matter of Bethan and Poppy having a happily-ever-after — they’re teenagers — but simply living in the mess of two closeted teenagers with very different backgrounds finding some sort of connection. 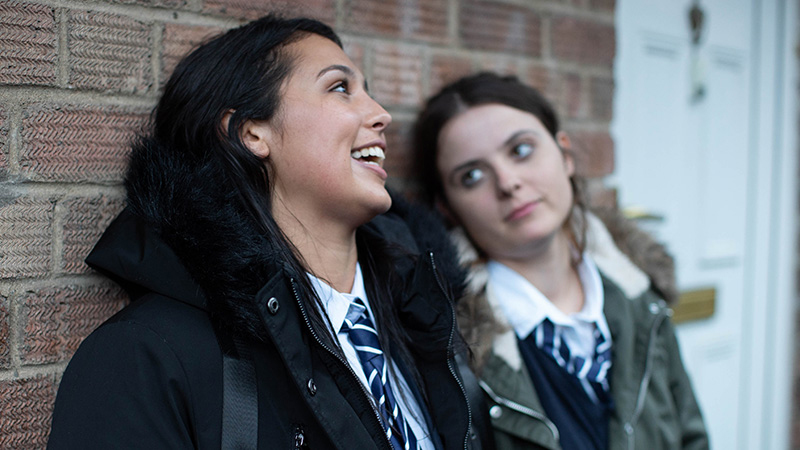 Instead the show shifts once again and puts Poppy back into her role as archetype. It’s frustrating as it hollows the narrative of the show and it’s frustrating because it plays into the trope of so many white teen movies and shows that make the only girls of color the villains. Bethan is white. Her friends are white. Poppy is not and one of her two friends is not.

Poppy should have been given the space to be three-dimensional, because dimensionality for all characters will always make for a better series. But given the casting, this goes beyond the disappointment of an underwritten character. It’s incredibly frustrating that a show this smart about class could be this thoughtless about race.

In My Skin is based on show creator Kayleigh Llewellyn’s own experience with a mother with bipolar one. The texture of lived experience is felt in their interactions. My favorite moment in the series is when Bethan shaves her mother’s legs after she gets home from one of her hospital stays. It’s tender and melancholy and, most importantly, specific. Llewellyn has created a series grounded in her complicated love for her mother, growing up in a low-income household, and, of course, her queerness. Ultimately the show is proof that writing from a place of lived experience will always result in the sharpest stories — that’s as evident in its failures as it is in its successes.

In My Skin premieres on Hulu on July 30th.

Join A+!
Related:huluIn My Skin