Feature image by Niko of The Sleepy Muse

I have a long history with the Batman mythos but it wasn’t until Javicia Leslie was cast as Batwoman that I really started feeling at home in this side of the DC universe. I’ve always had a soft spot for Batman. Beginning with Michael Keaton in the 1989 film, the playboy Bruce Wayne and his tortured alter ego spoke to me. Maybe it was my need to put on a performance in my everyday life, to smile and nod and make banal small talk, all to hide how broken I actually am. Like many people of color and queer people, I’ve found ways to relate to a character that is nothing like me. As a poor, fat, Black queer woman I had seemingly nothing in common with a rich orphaned straight white man.The same goes for his succession of Robins, who despite not being related to Bruce all managed to look like a chip off the old block. Exceptions being made for Damian who is in fact his son and Stephanie Brown for being the only blonde in a sea of brunettes.

As I grew older I began to realize that much like Goldilocks I had been searching for a place in the Batfamily lore where I could see myself. I thought it would be Kate Kane aka Batwoman when she was introduced in the 52 weekly comic series. Kane was white, Jewish and related to one of the richest men in the world and I was none of those but we were both women who loved women. Seeing that representation on such a big stage was refreshing. I fell in love with her depiction in DC Bombshells. She was an adventurer who inspired hope wherever she went. I even ended up cosplaying her.

Little did I know that Batwoman would eventually make her way to the small screen. Last October Batwoman premiered on the CW as the latest show to join the Arrowverse. It made history by being the first queer hero to headline her own show. Not only was she part of the community on screen, they hired a queer actress, Ruby Rose, to play her. This show came as a welcomed surprise. 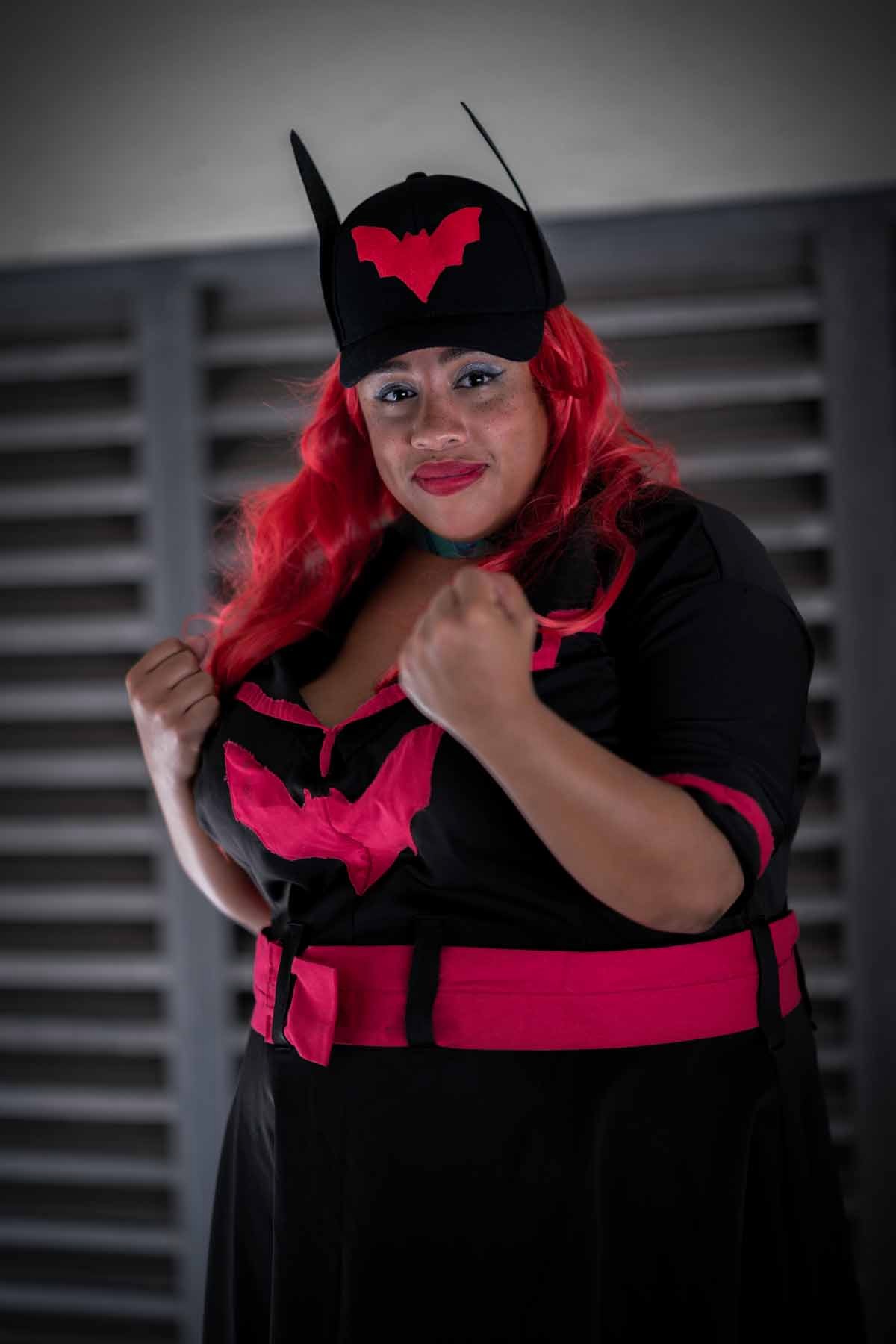 Photo by Niko of The Sleepy Muse.

After only one season, Ruby Rose announced that she would be leaving the show in May of this year leaving fans unsure of the fate of the character. Shortly afterward it was announced that Javicia Leslie, most recently seen in the CBS show God Friended Me, would become the new Batwoman.

I looked at the announcement with a picture of Leslie, a cloud of natural curls framing a beautiful brown face and felt a kinship. Black characters dotted the landscape of the Arrowverse. They were trusted companions, tech wizards and family. They were background characters and support for the lead. That changed with Black Lightning and it’s changing again with Batwoman. Leslie will be the first Black woman to portray Batwoman in a live action series. She added some much needed color in the mostly white expanse of the Batfamily and the heroes of the Arrowverse.

This is my favorite character being played by someone who looks like me.

Similar to the Black experience, the queer experience also gets left out a lot in these superhero tales. And often when we do see queer characters, they are white. Leslie is changing that once again, focusing the show on the experiences of a Black lesbian. Black Lightning did give us Anissa Pierce aka Thunder, a Black lesbian hero which was definitely a step forward but the show isn’t called Thunder. With Batwoman, the title character is a Black lesbian. Even better Leslie is bisexual. Representation in the character and with the actress playing her is something that doesn’t happen very often. Batwoman has managed to do it twice.

Last week Leslie posted fanart by Dany (@danydraws7) on Instagram. In it Leslie is wearing the signature Batwoman cowl, natural hair spilling out, with ‘New bat in Gotham’ written below her. Leslie captioned the picture with the hashtag #BatGirlMagic, a play off of the popular hashtag #BlackGirlMagic, in a message thanking fans for their outpouring of positive support.

A Black queer Batwoman is the new normal. As with all change, there are those who don’t agree with it. Some fans have criticized the choice of casting Leslie as forced diversity. I’ve found that fans who complain about ‘forced diversity’ have a problem with all characters who aren’t straight, white men who are usually seen as the default and thus need no explanation why they are present in the story while everyone else is seen as an unnecessary addition catering to the politically correct. Straight, white men are over-represented in media but the fandom is much more diverse. We want to be represented in the media that we love. Why should marginalized fans be relegated to the corners of fandom, fighting over scraps of representation? Leslie might not be the best choice for everyone but she is for me and I know I’m not the only one excited about this change.

Leslie will not be taking over as Kate Kane. Instead she will play a new character named Ryan Wilder who is described as likable, messy, a little goofy and untamed. I’m already seeing aspects of myself in this character. Wilder is also a lesbian with a penchant of masking her pain with bad habits. She’s not perfect. She’s had issues with Gotham City Police Department. As for Kate Kane, no worries that this will be a Bury Your Gays situation. Showrunner Caroline Dries has said that Kane’s disappearance will be one of the mysteries of season two.

The casting of Javicia Leslie came as a much welcomed surprise. She is giving a voice to Black queer comic book fans everywhere including myself. I hope that show embraces the character’s Blackness and allows her to grow out of the shadow of the previous Batwoman into a hero in her own right. Leslie began Muay Thai martial arts training earlier this year and I can’t wait to see how this training plays out on screen. I have a lot of hopes for this new incarnation of Batwoman but I feel with Javicia Leslie, I’m in good hands.

Mel Perez is a writer, podcaster, panelist and cosplayer. She is one of the co-hosts of the Nerds of Prey podcast. She enjoys sci-fi movies, fantasy books, crafting, costume design and deep sea creatures.

Mel has written 1 article for us.