Spencer is still hanging out with Johnny, trying to figure out his machine. She says she doesn’t want to figure it out; she just want to know, and he goes, “You’ll have to forgive me for sounding patronizing; it’s just that once you’ve ridden on the breath of the eagles to a yurt atop Mount Shuksan, you understand the world. And so I’m going to say, ‘Analyze that sentence, Spencer.'” 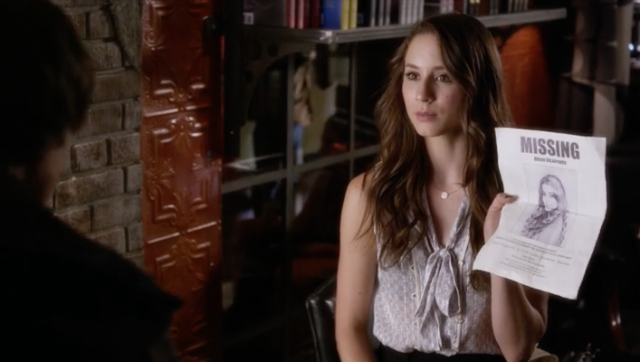 What’s next? Aria’s going to start writing fic about her and this girl?

Then he breaks out one of Ali’s MISSING CHILD posters because of course he does because it is a truth universally acknowledged that a condescending man in possession of dog-eared copy of anything Truman Capote ever wrote must be in want of being the one person who can crack the code Alison DiLaurentis.

Wait, though. This is great. Spencer quotes Vishnu about Ali, says, “Now I am become Death, the destroyer of worlds.” But you know who’s most famous for quoting that? Robert Oppenheimer, the director of The Manhattan Project, which, in Them!, is what caused the giant killer ants.

Back in Mona’s room, Hanna flashes back to that same sleepover with the Poe reading. She remembers waking up Mona to ask her to suss out her theory of time-stoppage a little more and also ponder the theological and social ramifications of Alison returning to Rosewood. What if she came back? What if she came back in disguise? What if we didn’t even recognize her? Mona’s calm is damaged for a minute. She says they’d be strangers to Ali! They’d be the unrecognizable ones! And then she relaxes, pets Hanna’s head, tells her it’s just a scary story like a Poe poem, and to go on back to sleep.

Hanna knows right away there’s something special about the Poe book, and she’s right. There’s a small tape hidden in the binding. What’s on the tape is a recording of a therapy session Bethany Young had at Radley. “She’s a bitch! She’s an evil bitch! I’m not being destructive; I’m practicing self-defense! She’s not the only one who can make plans!” Caleb and Hanna assume she’s talking about Alison, but that can’t be right because Ali and Bethany were exchanging friendly letters right up until Endless Labor Day, and anyway, it was Mrs. D, not Ali, that Bethany was drawing getting gobbled up by a Godzilla in the back yard. 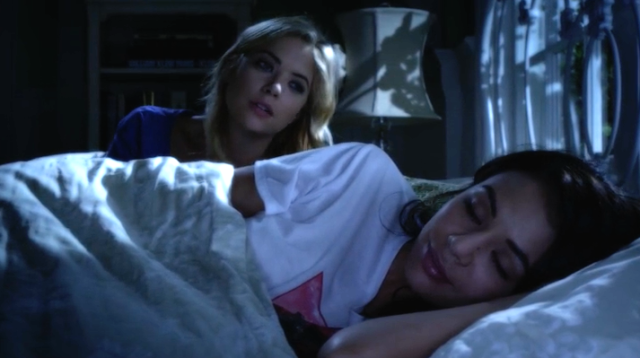 Okay, but we’d just be making out for practice, right? 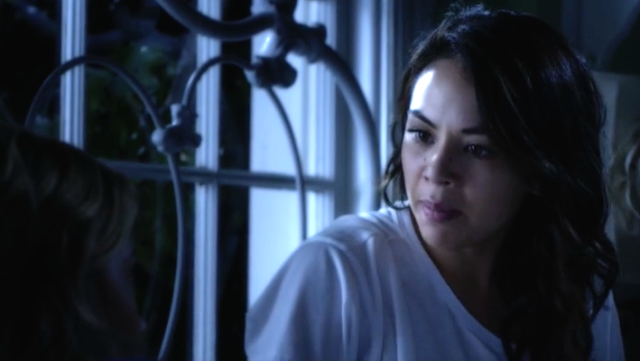 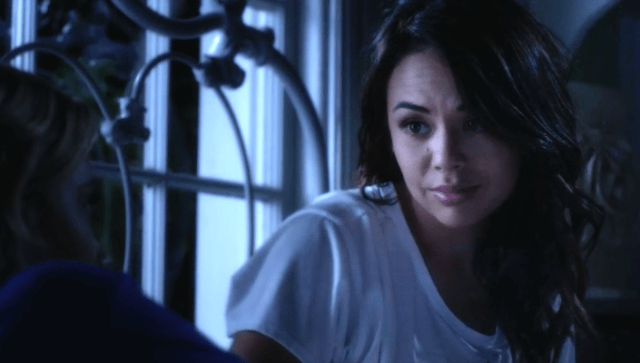 LOL, JK. Of course it would be for practice.

Aria follows Mike out to that lake where both Lucas and Jenna drowned. He is leaving a sack of sour gummy bears for someone, and he is furious when he spots Aria. He yells for a long time about how she doesn’t know shit about shit and never come here again and it’s none of her beeswax to whom he’s gifting these tasty snacks and I hope you don’t die in a bear trap on your way home through the woods. I also hope you don’t give a man your face, Aria, because according to my memory, his cottage is right near here. Also, frankly, mutant ants. I think maybe Joseph Dougherty is gonna get ya with some ants.

Finally, Johnny reveals his machine to Spencer. He shows her how it works. One person stands in a bubble and whispers, and another person puts her elbows on this desk in these elbow-holders and cups her hands around her ears and hears a secret.

Spencer is like, “You’re joking!” And Johnny says he never jokes. Once you have trekked the fjords of Baffin Island and tasted the nectar of the Newfoundland sun, you will come face-to-face with the reality of your own mortality and your ephemeral presence in the universe and you will never laugh again. You will paint Lake Baikal from your perch on the Olchon Islands, dotting red farmhouses along your canvas’ horizon with the blood of a virgin doe (her hide, your cloak! her flanks, your supper!). You will hire a camel to convey you through the Gobi Desert and drink his tears when he lays eyes upon Crescent Lake. You will speak no words in the Meteora Monastery, yet accomplish a lifetime of communication. No, Spencer. Once you have shaken off the chains of college and lived, you will never joke. 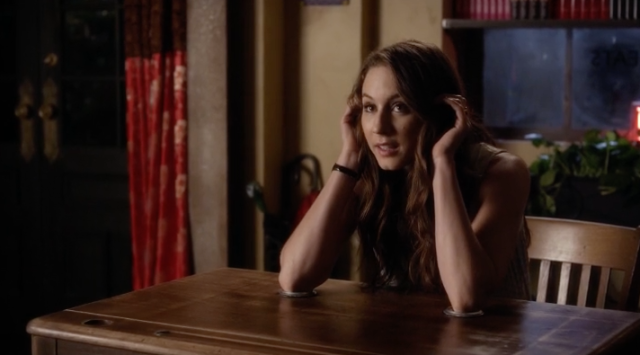 Just trying to find ways to make my face even more adorable.

Back at home, Veronica tells Spencer to stay away from Johnny because he is filling her head with the lies of a traveling circus man. Also, new evidence alert! Ali’s blood was found at the crime scene of Mona’s murder!

Okay. Okay, y’all. Get yourself a glass of water and have a good stretch because this next part is going to make you run around the room in circles with your hands above your head, squealing with undiluted delight. 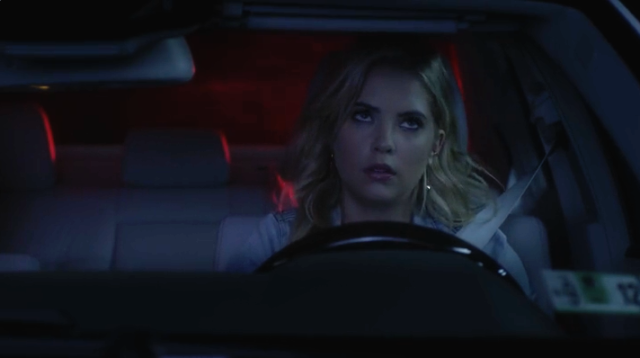 Oh, brother. Am I going to have to push another cop car into a lake?

Hanna is on her way home from Mona’s when a police car pulls her over. Even though it’s a backroad at night and we already spent a full season dealing with the fallout of her and her mother pulling over for police cars on backroads at night, she does it. But when she looks in her rearview mirror, there’s no one in the police car. So she steps out of the car and whips out this — no joke — expandable baton. Right, and she walks back to the police car and all of a sudden Holbrook is grabbing at her and getting aggressive and saying stuff like, “How does a girl like Alison become a girl like Alison?” The useful things he says are that Tanner knows literally everything, and that he was actually dealing with internal affairs these last few weeks so Ali has another henchman. The bullshit things he says are that he had a good career going and Ali ruined it by letting him screw around with her.

Heather has written 1386 articles for us.