Feature image via the Lesbian Herstory Archives at DCMNY 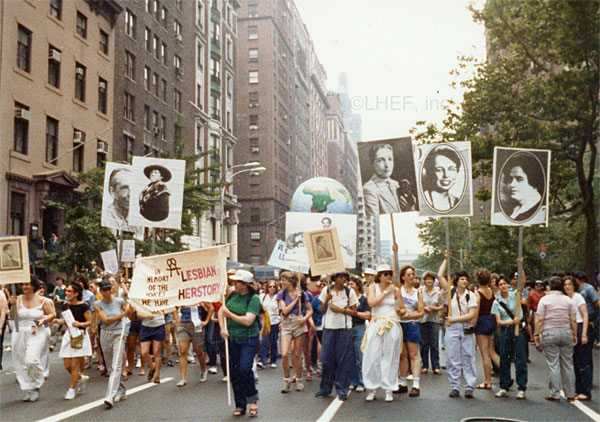 In the coming days a million think pieces will be written about how a fear-mongering, woman-hating, disabled-hating, POC-hating, Muslim-hating con man managed to get elected president of the United States. You already know all the headlines and all the takes, without even reading them. The bottom line is that white Americans showed up to the polls in record numbers yesterday for the sole purpose of stopping the march of progress. We are a country built on misogyny and white supremacy, and the prospect of four years of a woman president after eight years of a black president was too much for an overwhelming majority of white voters to handle. And so they elected Donald Trump to the highest office in the land.

I didn’t sleep last night. I threw up more than once. Stacy hasn’t stopped crying and has suffered multiple panic attacks. I am heartbroken and terrified and sick about all the big things a Trump presidency will mean and all the gut-stomping little things we haven’t even thought of yet. I lay in bed shaking last night at the thought of Melania Trump taking over FLOTUS’ Twitter account.

I don’t know what the future holds, but here’s what I do know: You are loved. You belong here. And we will never, ever, ever stop fighting for you. The country didn’t change last night; the white supremacist patriarchy, the hate for minorities, it didn’t appear from nowhere. It crawled out of the darkness where we’ve been fighting it our whole lives. We’ve always known what was underneath the facade of equality in this country and now we’ll move our battle into the light.

There’s been a question buzzing around the internet for a while now, a question about whether we still need queer media, women’s media, counter culture media. Are gay people not the mainstream now? Has President Obama not moved us into a post-racial world? Well, no and no. And now the whole world knows.

Catherine Cortez Masto of Nevada became the first Latina senator of the United States last night. Ilhan Omar is our first Somali-American legislator. They are fighting for us too.

Let’s talk about how you’re feeling.