It feels frivolous to write about pop culture today. Like you, I’m nauseated by the white supremacist rally that took place in Charlottesville this weekend, and unsurprised but enraged by Donald Trump’s response, and mourning for Heather Heyer’s family, and sick with worry about the emotional and physical toll this is all taking on the people of color and Jewish folks most persecuted and oppressed by it. It’s consuming my every thought. I love y’all and I’m out here fighting alongside you every day, even when I pause to write about TV and movies.

The Queen of the Galaxy

Netflix has lured Shonda Rhimes away from ABC after 15 years, which, in my mind, is the end of network broadcast television and the inevitable next step of Shonda Rhimes’ slow march toward becoming the official queen of the galaxy. According to the Wall Street Journal, Rhimes was making $10 million a year at ABC, and Variety says Netflix “undoubtedly is paying a premium” to get Rhimes and Shondaland to come over to their streaming platform.

Grey’s (and the new Grey’s spin-off), How to Get Away With Murder, and Scandal will stay with ABC; Rhimes will be developing a new slate of programs for Netflix. My feeling about this is just complete ecstasy. For starters, Shonda Rhimes deserves to be making a billion dollars a year. But also I am just so excited for us. Rhimes has done more than I would have ever believed possible for women of color and queer people on broadcast television. At Netflix she’ll be able to do anything she wants. I think that means things are going to get even gayer and even more POC-focused and my god now is the time for it. I’m extra especially convinced after Ava DuVernay’s piece in Variety about why Netflix understands artists and diversity.

Also, I was flipping through Good Housekeeping today (leave me alone, I’m an elderly lesbian!) and have you seen this amazing ad? 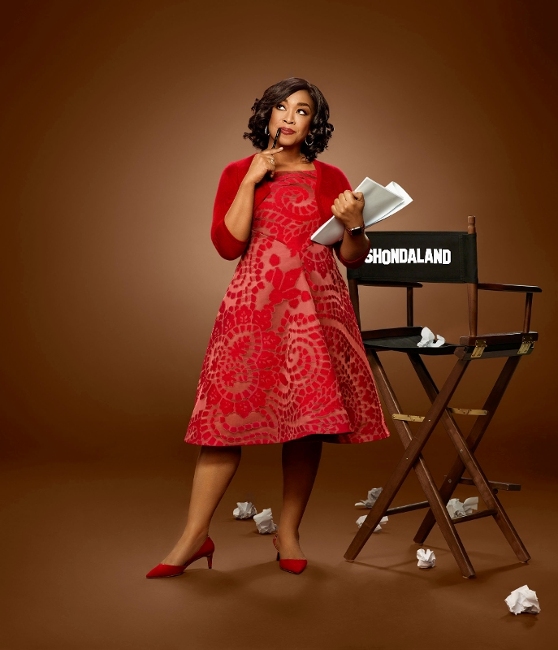 The Pilot pen company made a G2 pen and named it The Overachiever’s Pen and made Shonda Rhimes the face of it.

+ If you’re looking for an officially licensed Broad City sex toy, you very weirdly happen to be in luck.

+ Alice Isn’t Dead, the whimsical nightmare podcast starring our beloved Jasika Nicole, is being adapted for TV. She better be get the truck driver leading role!

+ Elizabeth Moss would like you to give up guessing what’s going to happen next season on The Handmaid’s Tale.

+ Shay Mitchell is playing gay again in Lifetime’s ten-episode TV adaptation of Caroline Kepnes’s You, a story about — look, I’m just going to be real with you. This book is like the alternate universe love child of Gossip Girl and Pretty Little Liars. Penn Badgley (Dan Humphrey/Gossip Girl) plays the main guy character and Shay Mitchell (Emily Fields/Robot Emily Fields) plays the other main character. The whole story is just so very completely fucked up. I won’t spoil it for you, but it’s gonna be a mess. TBD whether or not it’s a watchable mess.

+ Hannibal‘s coming back to TV, I guess? Goodbye forever, Margot and Alana.

+ Amandla Stenberg and Algee Smith have signed on to star in The Hate U Give, a film adaptation of Angela Thomas’s Black Lives Matter-inspired novel.

+ Well, now here’s a thing: St. Vincent is directing a female-led adaptation of The Picture of Dorian Gray for Lionsgate. My brain has not fully wrapped itself around any of that sentence.

+ Octavia Spencer is going to star in the new Madam C.J. Walker mini-series by LeBron James’ production company! Speaking of which, there are 60+ biopcs about black public figures in development. Shadow and Act has a full and detailed list.

+ Anna Paquin has joined the female-led creative team behind the film adaptation of Fiona Shaw’s queer novel, Tell It To The Bees.

+ Over at Broadly: The Man Running a Queer Film Festival in a Nation Where Homosexuality Is Illegal