I don’t know about you, but I’ve been starting to panic a little bit about where I’m going to get my gay cartoons and superhero stories, with Netflix pulling the plug on so many animated things, the CW doing an entire Queer Culling, and The Owl House‘s second season coming to a close. Hark! A Hope! Kate Beaton’s New York Times best-selling book, Pinecone & Pony, has been adapted by DreamWorks Animation and First Generation Films for Apple TV, and it features queer story editor Taneka Stotts, nonbinary writers Pilot Viruet and Gigi D.G., and a queer/nonbinary storyline between Rachel House’s Gladys and her partner Ser Anzoategui‘s Wren!

Pinecone & Pony, like all the best cartoons, follows a plucky heroine on magical adventures as she faces down dragons, giants, trolls, and all the hard parts of growing up, like figuring out how to share your friends and conquer your insecurities and be the best you even when things are tough. If that sounds like little kid stuff, that’s because it is little kid stuff. Unlike Steven Universe, Adventure Time, She-Ra and the Princesses of Power, and Legend of Korra, Pinecone & Pony is aimed at younger audiences. Even younger than The Owl House. Like My Little Pony: Friendship Is Magic audiences — and there’s never been a better time for it, as old school homophobia and a dozen new ways to legally persecute trans people make headlines all over the world. And, you know, Disney’s general bullshit. 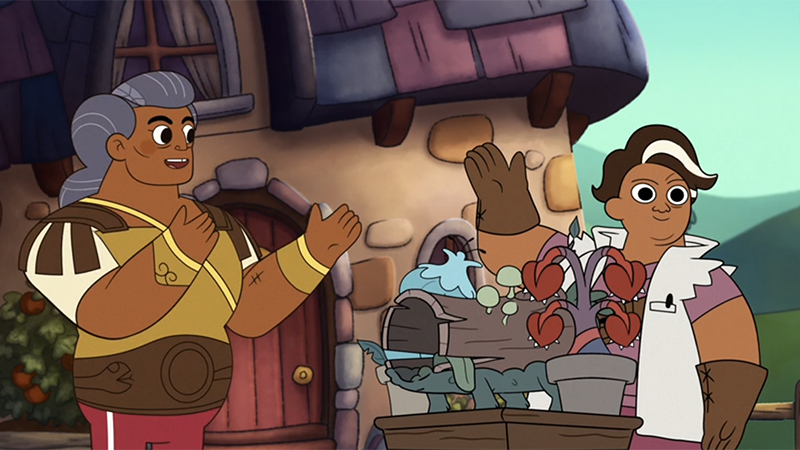 In episode six, “In Plain Sight,” Pinecone and Pony show up to (magic) school and find out it’s plant day. Their teacher, Gladys, is especially excited about the wacky horticulture they’ll be learning because they have a special guest instructor: “They are talented,” Gladys beams. “They are glorious! Their warmth outshines the sun! Please welcome: my partner, Wren!” Everyone cheers, including me. I’ve been missing Ser Anzoategui fiercely since Vida; it is so great to see them back on my screen, even the animated version.

“In Plain Sight” is as stress-free and low-stakes as every episode of Pinecone & Pony. Pinecone wants to work with her best friend, who gets paired up with another student and a Timberwolf puppy, which is a log that acts like a little dog! She and her partner, who she doesn’t know and thinks is weird, get a snake plant that feels boring by comparison. What’s worse, Pinecone’s best friend bonds with his new partner and tells her about their secret waterfall. In the end, Pinecone learns that her partner, Fauna, is actually very cool too. She saves Pinecone’s arm, which gets stuck inside the snake plant, and Pinecone invites her to join them at the waterfall too.

Wren and Gladys are both super proud when Pinecone gives back her plant badge and says that Fauna did all the work, and she’ll earn her badge another time, fairly.

I meant to just watch the one episode of Pinecone & Pony, but once the theme song got stuck in my head — “You’re a waaaarrrior!” — I blitzed through all eight of them. You, too, can stream them right now, for a chill and adorable good time, on Apple TV! (And, for more nonbinary animated rep for a slightly older audience: Steven Universe, always.)