The following review of HBO Max’s Peacemaker has slight spoilers for its lesbian storyline.

Just to start us off, yes Danielle Brooks’ character Leota Adebayo in the James Gunn The Suicide Squad spin-off Peacemaker is a lesbian, and already the best part of the series by a football stadium sized mile. It’s obvious the literal first minute she appears, cracking loving jokes with her wife Keeya (Elizabeth Faith Ludlow) about secret spy missions and Octopussy as their three small dogs hop around their ankles. Leota wants to name their future daughter Octopussy — Sharknado if its a boy, of course — and it’s warm, goofy, sweet.

I’m starting there because if dudebro bang-bang, guns-and-tits, comedy is not your thing, no matter how sweet its undertones, you can go ahead skip Peacemaker now.

I recognize that’s a harsh opener, but it’s not an insult to the show! Those are all trademarks of the Suicide Squad franchise’s humor, but without any of the artistic ambition or stylization of the films. Wait — that still sounds harsh so let me try again. I once described James Gunn as a “master of ‘hahahaaa funny creatures and a Crayola crayon box of colors but also who’s cutting onions in here because I can’t believe I’m now crying’ storytelling” and while Peacemaker may not be breaking any new molds, it thrives at playing to Gunn’s strengths, now taken to the small screen. Peacemaker has a striking pummeled beating heart — with interrogations of loyalty, duty, and loneliness — underneath its dick jokes. That will either be your thing, or it won’t.

Peacemaker, as a character who’s devoted to achieving peace at any cost no matter how many men, women, or children he has to kill to get it, was easily my least favorite part of last summer’s THE Suicide Squad (and yes the “the” is how we’re supposed to distinguish it from 2016’s far inferior Suicide Squad). In the first episode of the series he’s described as “Sexist. Probably racist.” And yeah… that about tracks with my memory.

There’s a question that Peacemaker seems to be invested to unfold, can a white cis guy archetype who’s been raised on 80s rock and patriarchy be brought into the 21st century as a hero on new terms? That’s not a question I expect literally any Autostraddle reader to be interested in answering, but I am surprised that I found myself at least curious. It helps that his pet eagle, “Eagley,” is adorable (what did I tell you about Gunn and funny creatures?). It helps that Peacemaker’s father, Auggie, is a legit white supremacist (as he is in the comics, too), which makes Peacemaker damn near cuddly — especially if you’re one of those queer women who has a soft spot for himbos — in comparison.

But mostly, it helps that there’s Danielle Brooks. 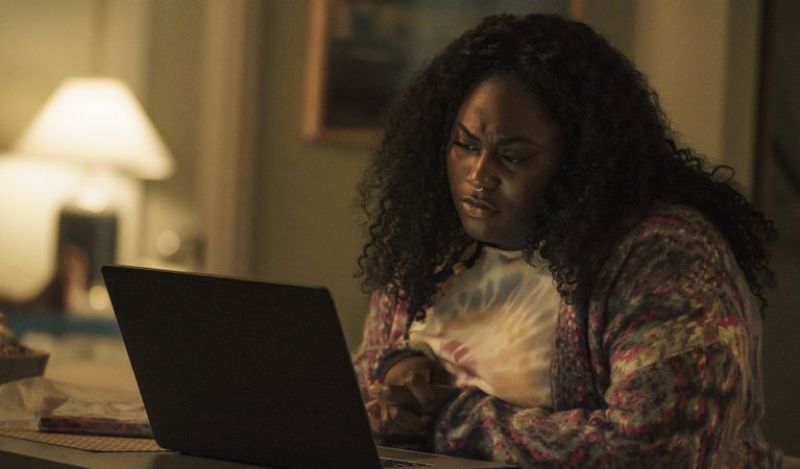 Danielle Brooks makes every project that she’s a part of better. Leota Adebayo appears to be an original created character to the TV show (I can find no mention of her in any comic), and that’s leaned into as she’s literally the “new girl” on the team — the entryway for the audience, which is a rare point of view for a queer Black character in a majority white show to hold. Despite being a standout at the SUPER DUPER SPY ACADEMCY (sorry, I didn’t catch the name), she has limited field experience and barely knows how to hold a gun without becoming a nervous wreck. Its easy to wonder how a seemingly well adjusted gay woman with a wife and dogs to look after even ended up in this mess. Peacemaker doesn’t wait at all to answer — Leota? She’s the daughter of the ruthless Amanda Waller (Viola Davis), the never-to-be-fucked-with antagonist of both Suicide Squad films.

Supposedly, Gunn wrote Leota with Brooks specifically in mind after being captivated by her work in Orange Is the New Black (yeah, get in line, buddy) and thank goodness because it’s through her that Peacemaker finds the depth that it appears to be looking for in Cena, and coming up short.

Leota never wanted to be a part of her mom’s underworld spy assassin business, but she and Keeya need the cash in a big way, and so now here she is, trying to make sense of it all and escape with her soul intact. Peacemaker never wanted to become like his father, and so now here he is trying to make sense of the world, away from what he’s been taught.

The parallels aren’t exactly subtle or elegant, but with Danielle Brooks quite literally stealing every scene that she’s in — it’s hard to look away.