Why hello there! Last weekend, as I mentioned during my post-bus travel haze, our very own Kelsey the Video Person and I made the trek to Boston from NYC for Pax East 2010. PAX is the video game conference put on by the gentlemen of Penny Arcade. And I love gaming and Penny Arcade and also just got some really precious business cards printed, so we went.

We made it there and back alive, and only some of the in-between parts are hazy, for whatever reason. I blame that on Rachel, the Autostraddle All Star kind enough to let us crash at her place and bug the shit out of her for directions around Boston constantly.

I had never been to Boston, but I do really like The Departed, and also New England c

lam chowder, so I think that counts. Kelsey had been and was frequently awash with directional sense-memories, guiding us like some kind of Bloody Mary fueled GPS system.

We got into Boston at like late. Like 11:30 or something, which is late ’cause I’m an old person and go to sleep at midnight. Well, not always but yeah, it was late. So we get in and we’re like, hey let’s meet with our delightful, bookish-seeming online Auto pal, Rachel who we’ve never met so she can guide us! And so we plan to meet her at some weirdly named Boston subway station (not Alewife, that’s my fave weird name).

So Rachel shows up and it turns out we really underestimated her, because not only is she seemingly Ragingly Drunk, but she’s got like 20 other Ragingly Drunk gay ladies with her! Wow! Rachel’s neat!

Naturally we become fast friends and this roving pack of dykes leads Kelsey and I out for the night, after we down an entire bottle of shitty white wine on public transportation in like 10 minutes so we can catch up and not look like losers or nerds.  So then Rachel and her cohorts lead us to this lesbian club that everyone insists is Lame. Kelsey and I didn’t think the club was all that Lame, but maybe that’s because we’re Lame? I hope not.

The point of all this Day 0 business is that Rachel was Really Cool. And also more so, the point is posting this photo of Rachel stuffing dollar bills into the thong of an exotic dancer. 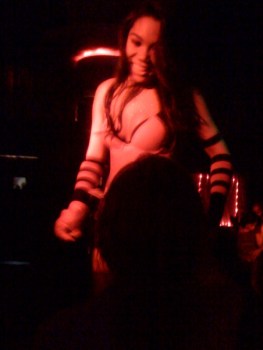 Because it happened and that’s what iPhone cameras are for. Thanks for humoring me and doing this Rachel. Also the point is excuses. Because turns out we stayed out til 4:30 or so drinking, and that’s like way past my bedtime. But Kelsey almost got a new ladyfriend out of it- one from Western Massachusetts who works in contracting. She seemed real nice and told Kelsey she was cute a lot, which is also real nice because everyone likes to be told that they’re cute. Also, I think we made so many New Friends because we declined to tell anyone that we were in Boston for a gaming conference. We probably said we were visiting relatives or something.

Yes, I realize that at this point Kelsey and I haven’t even made it to PAX East yet, but these are all Important Things I need to share with you. And it’s my journal and my Geekender, so everybody just lay off! 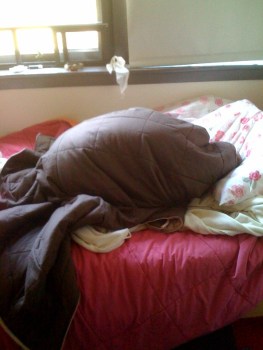 As this image of Kelsey clearly depicts, Day 1 of Pax East 2010 got off to a rather rocky start. In this photo, Kelsey is curled into a ball because she is hungover. And that’s why no one should drink to excess and you should always get 8 hours of sleep and also brush your goddamn teeth while you’re at it you little reprobates.

So yeah. Maybe we missed a few things Saturday morning, and maybe we missed a few things more until like mid-afternoon Saturday, but hey, we made up for it on Sunday. Which you’ll see later and you’ll forgive us then. Really I don’t think you’d forgive me if I hadn’t taken a picture with Gabe from Penny Arcade, but I did, and we actually had a nice talk with him, so of course you’ll forgive me. Because in the nerd world, obviously he’s like an A- list celebrity. Or better!

Okay, so by this point, Kelsey and I (I wish she had a fun code-name, but I just can’t think of one) are not quite on our B-Game but at least we’re on our C+ Game. We’re feelin’ the pain a little, to be honest, and it’s all Rachel’s fault for being cooler than us. So after whining at Rachel for like an hour and thirty minutes, she drives our asses somewhere and finally gets rid of us and lets us loose unto the city of Boston. 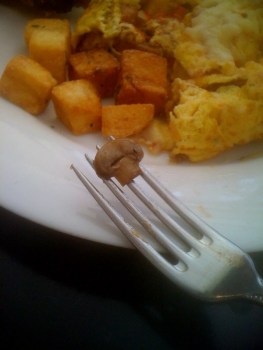 look at this tiny mushroom!

By this time, I really really need a Bloody Mary and brunch or I’m actually probably going to die. At this point, the notion of looking at pixels on a moving screen is probably the worst possible thing I can think of, so we do a fair amount of dawdling before even considering heading to PAX. After stumbling around Boston Common for what seemed like an eternity, we found a really waspy brunch place that we felt a little out of place at, but we saw Bloody Marys through the window. And we had our priorities straight.

So, we’ve each had a drink, and I made sure to down a Bellini for good luck, so we’re ready to go. Also my omelette had the cutest tiny mushrooms! Wow!

PAX. Yes, PAX. We made it there. And wow, is it hell-on-earth for someone who is real tired and real hungover. Happily, we’re only the former now, because we’re buzzed! So PAX is great- wheee! It’s a massive c 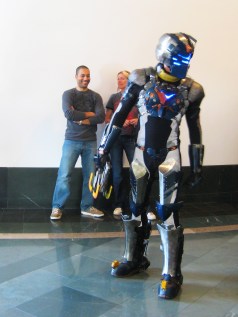 rowd. Since Saturday’s the biggest day of the event (it started on Friday) it seems like maybe all approximately 70,000 total attendees are here. And I’d say 20,000 of ’em are wearing some crazy elaborate costumes.

This guy was top-notch. I don’t even know what he was supposed to be aside from ambiguously robotic and futuristic? Maybe you do. I wouldn’t mind wearing his crazy get-up. It was maybe the only flattering one I saw the entire conference: it made his ass look really fit.

We have a lot more evidence of costumes and cos-players in the PAX East Video action that Kelsey’s putting together, so look for that soon. There was some pretty crazy stuff. Some Links, a Mario or two and a perfect Bayonetta among them. 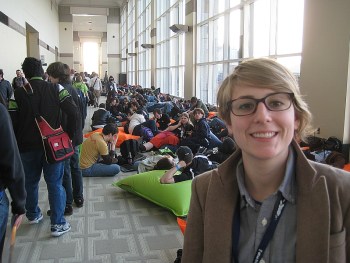 One of my favorite parts of PAX didn’t involve gaming at all. In search of the Press room, Kelsey and I stumbled onto hallway after hallway full of massive neon beanbag pillows, each with a gamer sitting atop it, PSP in hand. And if they weren’t completely immersed in a PSP they were peacefully unconscious, sleeping a weird, unattractive public kind of sleep like a colorful array of beached sea-mammals. It was awesome.

To be continued, now that we’ve escaped the Palm Springs/Dinah Triangle.