It’s on purpose that Rebecca Hall’s directorial debut Passing, based on Nella Larsen’s Harlem Renaissance novella of the same name, opens with a gaze.

Irene (Tessa Thompson) has taken respite in a segregated hotel tea room, her first and only time successfully passing as a white woman. Already its clear that she’s uncomfortable, quite nearly jumpy at the idea of being caught. And of course caught she is, locking eyes with an old childhood friend, Clare (Ruth Negga), who is also passing for white. 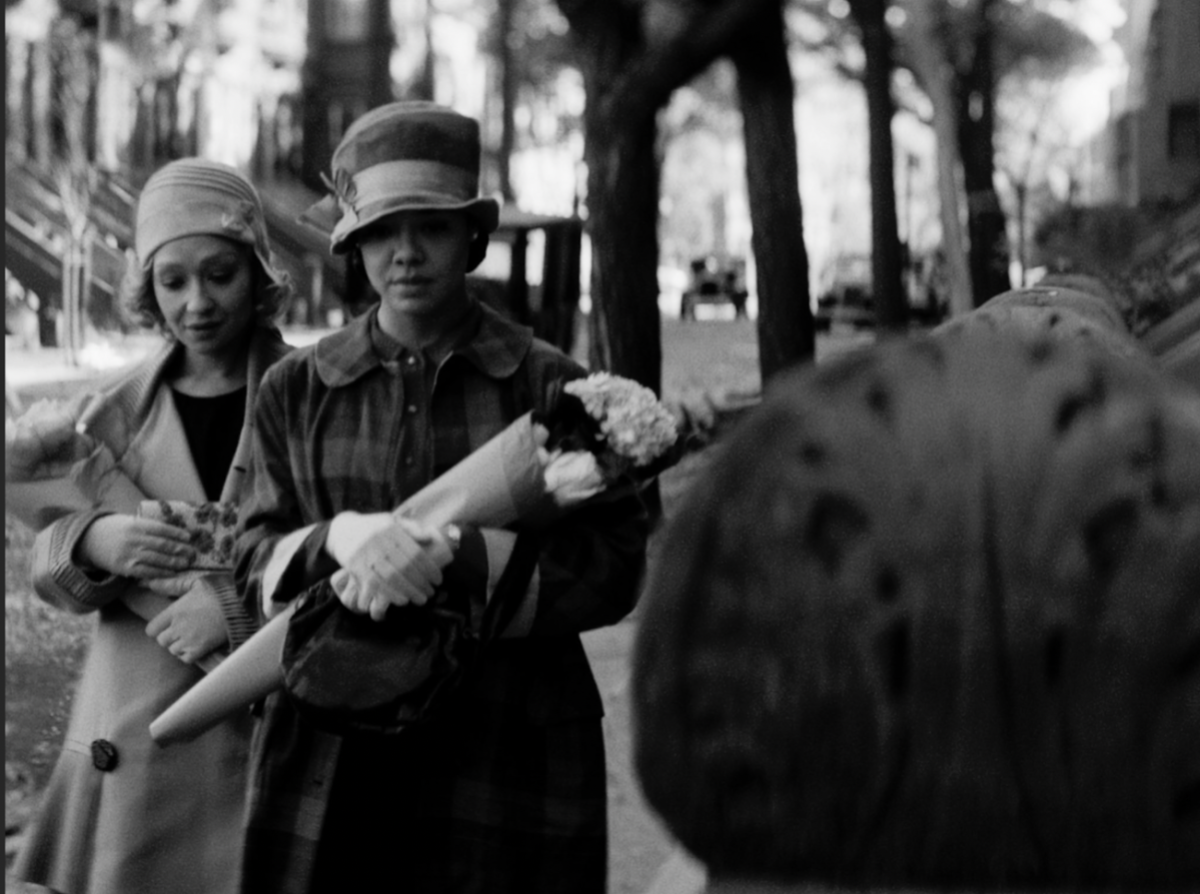 Irene and Clare, both light-skinned Black women who knew each other as children, fell out of touch as adults. Clare now passes as white full time with a blatantly racist white husband (it would be comical, if he wasn’t so dangerous). Irene is a part of the Black upper class of 1920s Harlem Elite, with a doctor husband. Both women’s privileges are toyed with and displayed; Irene at times enacting colorist and class bias against her house help, while Clare’s isolation from the Black community she grew up with causes depression and malaise. Reunited, the friends spend increasing time together — at the house, running errands, and nights dancing at Harlem clubs.

Passing has me in such a chokehold, I still don’t know where to start. There’s the craft of the storytelling, the questions it presents about understanding race — for once! — from a Black gaze. It’s singular in it’s grab and should be on the short list for any awards season conversation. But more than anything, I can’t stop thinking about the way that Tessa Thompson looks at Ruth Negga.

This is a film about the limitations of the closet. In an interview with the Los Angeles Times, Tessa Thompson addresses its underlying tensions directly, “Passing to me is as much about ‘passing’ for any of the norms, and I think the book is talking about the performance of gender and sexuality to be sure.” In the same interview, Ruth Negga continues Thompson’s train of thought, “There are levels of attraction in relationships that are not black and white.” The connection between Irene and Clare is charged. The film luxuriates in tension as the women observe each other.

In one scene, sitting at a side table in the club, Irene watches from behind as Clare dances. Following Irene’s eyes, the camera pans — slowly – down Clare’s body. Noticing the attention, Clare gives Irene her hand. Holding her breath, Irene reaches out to hold it. Then, immediately, she pulls away when her husband approaches. 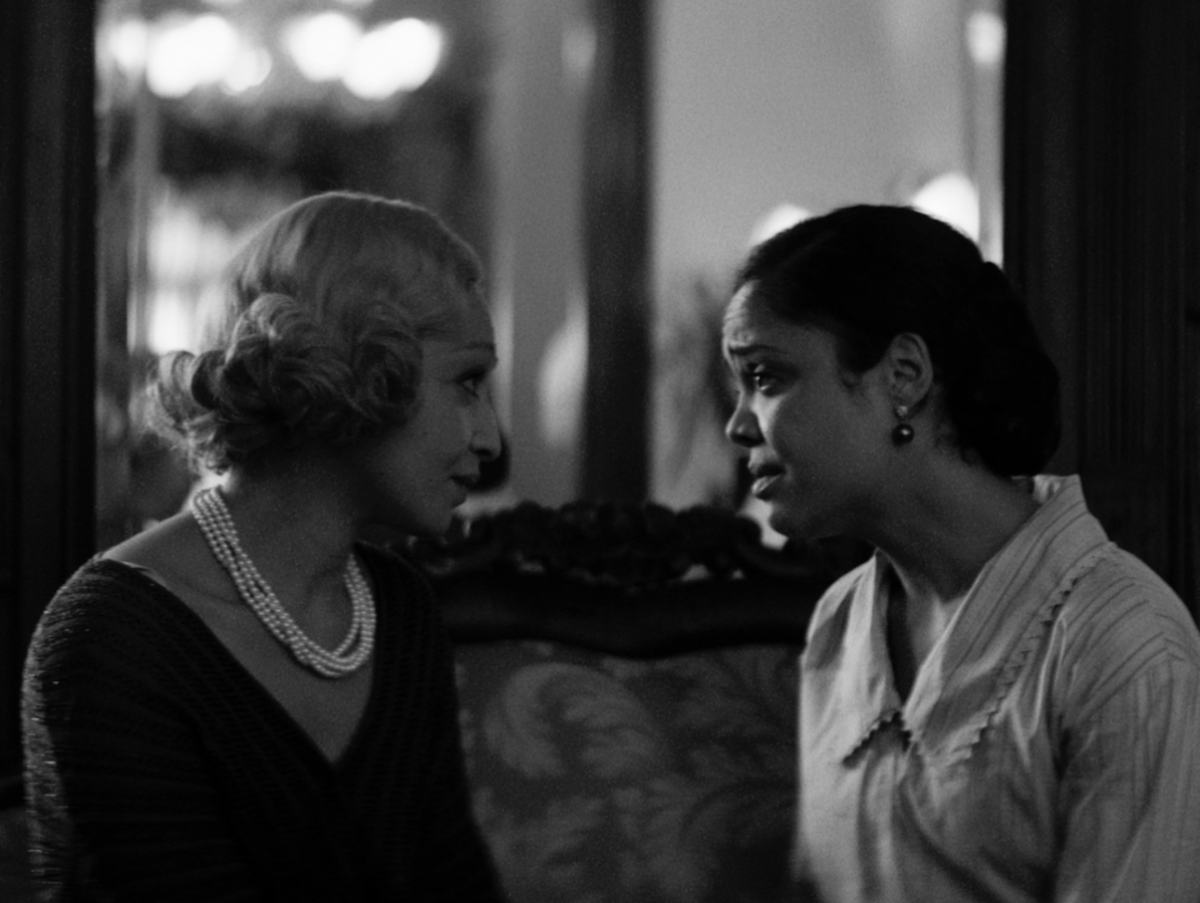 In her preliminary meeting with Thompson and Negga, Rebecca Hall asked, “‘Do you see this as, you know, are you getting anything [sexual]?’ And they both immediately were like, ‘Of course.’”

At the same time, Hall describes, “I tried to shoot it not in an obvious way, because that wouldn’t be true to the book, and also I think it would be too heavy-handed in terms of what is being suggested.”

On this — “that wouldn’t be true to the book” — I vehemently disagree. Nella Larsen’s Passing has long been read as a queer text, including by none other than Judith Butler. And with passages such as this, from Irene’s point of view [emphasis my own], it’s hard not to see why:

“She remembered her own little choked exclamation of admiration, when, on coming downstairs a few minutes later than she had intended, she… found Clare there too. Clare, exquisite, golden, fragrant, flaunting, in a stately gown of shining black taffeta, whose long, full skirt lay in graceful folds about her slim golden feet; her glistening hair drawn smoothly back into a small twist at the nape of her neck; her eyes sparkling like dark jewels.” (Larsen 233)

Irene’s longing for Clare surpasses any medium. And in so many ways, there was no actor better suited to bring Irene’s gaze to life than Thompson, who mesmerizes the camera as if time itself stands still in her presence. 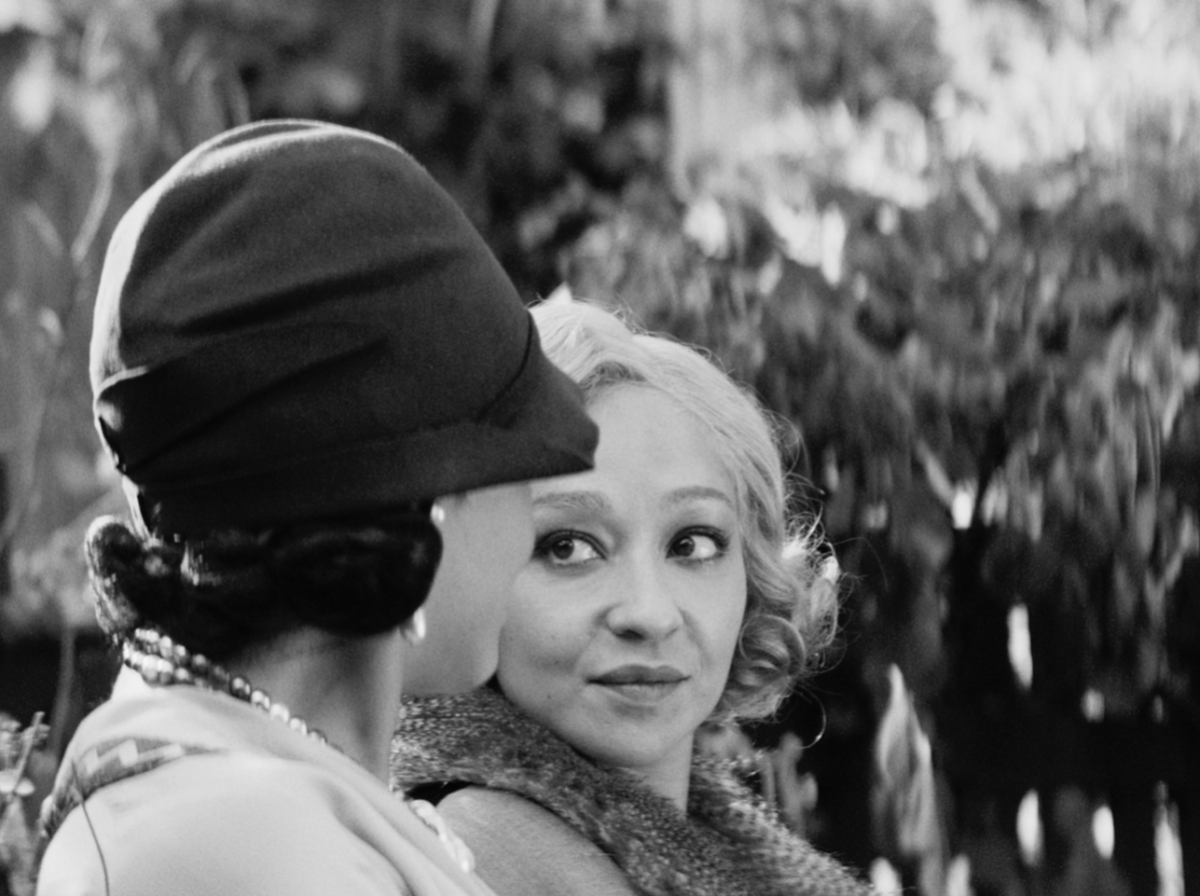 And perhaps it could be said (by others, not by me) that Passing has an over reliance on those long, drawn out pauses. That it puts the weight of its shoulders too squarely on Tessa Thompson’s ability to emote from beneath her eyes to make up for a relatively thin script where nothing happens and then, suddenly, everything happens all at once. It could be argued that Ruth Negga’s tour de force performance as Clare would have only been deepened with at least some narrative clarity for her actions — was she genuinely attracted to Irene in return? Were Irene and her husband merely Clare’s playthings? What of the darkness that laid behind her sunny smile as the chaotic tornado consumes Passing’s third act?

But sometimes, it really is about the small things. Time and again, Irene gazes upon the profile of Clare’s face, not breaking eye contact. Feeling heat, Clare looks up. Irene sharply inhales, blushes, and looks away.

And every single time, I finally understood why white lesbians love Carol so much.

Carmen has written 450 articles for us.