As more queer cinema gets made, filmmakers are getting to tell stories that may have once seemed frustrating or misguided. When there aren’t just a handful of films each year, audiences will hopefully be more responsive to queer stories that are messy, complicated, and flawed. Representation can be a burden on artists and this shift is undeniably good.

I was thinking about this as I watched Daniel Laabs’ debut feature Jules of Light and Dark, a movie that begins with the protagonist’s girlfriend fighting her for a man. Maya and Jules are at a rave and while Maya’s intentions are unclear, it’s very clear that Jules wants to hook up with David, and very clear that David wants to hookup with Maya.

And then Maya crashes her car with Jules in the passenger seat. 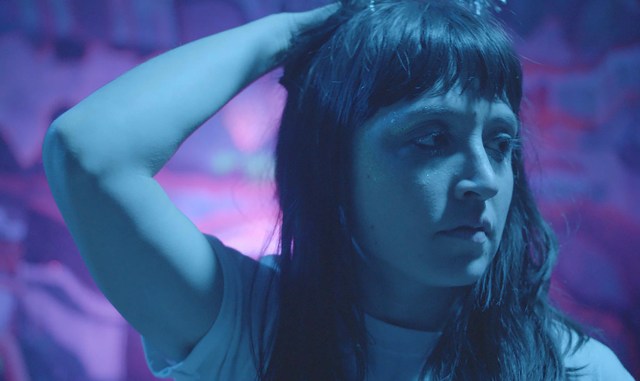 What follows is a duel narrative: Maya coming to terms with the accident, Jules’ waning feelings, and a general ennui about the future. And Freddy, a middle aged gay man who finds the car wreck, trying to find connection somewhere, be it with Maya or his estranged daughter or his crush Luis or a dog he adopts on a whim.

It’s hard to quantify reality. When something feels false on screen, it’s usually more about the how than the why. The choices the characters make could be justified. I’d welcome the complexity of Maya’s love triangle or Freddy’s strained relationships if Laabs had found a way to make them feel more true.

The style of the film, lyrical and meandering, is a pleasure to watch, as are all the performances, especially Tallie Medel as Maya. But there’s a difference between a movie being visual and a movie being underwritten.

There’s a lot to like about this film, especially in the most visual sequences like the rave or whenever Freddy is driving around the Texas landscape. Laabs has an accomplished style and clearly a good rapport with actors. I look forward to his future work and hope he continues to push on our expectations of how queer people behave.

But ultimately you leave Jules of Light and Dark feeling like Maya: confused, lost, and unsure of what’s next. Maybe that’s the point.