In August of 2006, seven black lesbians from New Jersey were hanging out in the West Village of New York City when they were harassed and violently threatened by a man on the street. When they defended themselves, they were arrested and charged with attempted murder and gang assault. Four of the women — Renata Hill, Patreese Johnson, Terrain Dandrige and Venice Brown — plead not-guilty, knowing they were acting in self-defense. They were convicted and given sentences ranging from three to eleven years. Their case became a focal point for activism supporting the women and their case, and protesting the violence, racism, misogyny and homophobia of the legal system that systematically prosecutes women for trying to save their own lives. They became known as the New Jersey Four. 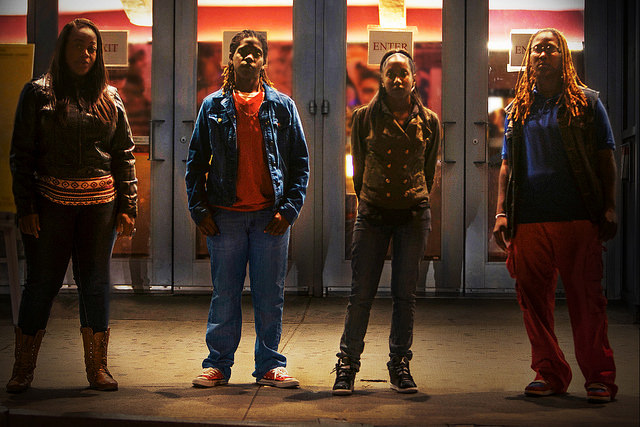 On Monday, June 22nd at 10pm, Out In The Night, a documentary film by blair dorosh-walther, following the New Jersey Four’s case from 2008 to 2013, will be broadcast on Logo and PBS simultaneously. This is the first time it will be aired on TV, and it kicks off PBS’s POV (Point of View) documentary season as well as Logo’s new documentary series, Logo Documentary Films. “This is the first time PBS has ever worked with another network in this way — to simultaneously air a documentary,” said Logo Public Relations and Media Affairs representative Rich Ferraro. “So we’re going to work, as both of these networks, to get this story out there.”

“It’s very rare for a film to be on two different stations, so we’re very excited about reaching a broader audience,” dorosh-walther said.

At 12AM on June 23rd, after the film’s broadcast premiere, it will be available to stream online.

The film, which premiered a year ago at the LA Film Festival and has since been screened over 90 times, has coincided with the Black Lives Matter movement and public outcry over the violence black people face daily across the U.S. Hill and dorosh-walther both spoke to the potential of the film to raise awareness of widespread violence and bias in the court system against black women, black queer people, black gender non-conforming people, and black youth. Hill said, “I want numerous people to be able to connect with the film. I know that our story is the story of so many others, and I want those people to know that they’re not alone and that they do have the right to fight back. The more we verbalize what’s happening to us, maybe the faster we get results. We have the right to be respected just as much as anybody else.”

She also spoke to the connections between her case and other black women who have been arrested and prosecuted for acting in self-defense. “CeCe McDonald’s case is not just CeCe McDonald’s case – that’s my case and so many others, like Marissa Alexander’s. And as we raise awareness about our own documentary, we are given the opportunity to raise awareness about the other situations going on around us.”

dorosh-walther spoke to the significance of the four’s decision to fight back and then plead not-guilty to the charges against them: “I really believe they were this pocket of resistance that night on the street, and again in the courtroom when they pled not guilty. They were facing 25 years, and that’s incredibly difficult thing to do, to plead not guilty. I think that they should be honored and admired for their strength and their courage and their resistance.” 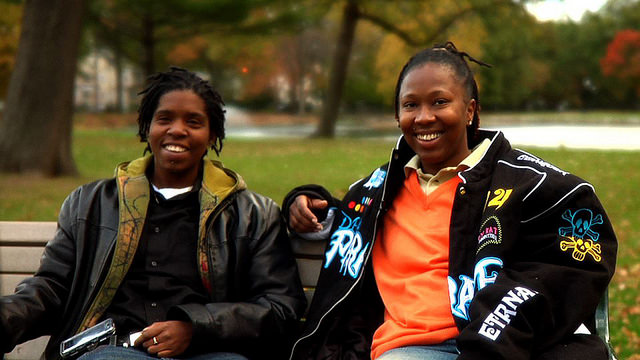 Out in the Night is an hour long, and covers a lot of ground, from showing the impact the attack and the case had on the four women and their families, to describing the details of the attack from the women’s perspective. The perspective of the New Jersey Four was sorely lacking from mainstream media’s coverage of the incident. They were portrayed as a “gang” of “killer lesbians,” falsely associating the charges of “gang assault” with actual gang association, and encouraging speculation on their motives based on racist and homophobic stereotypes. Bill O’Reilly took the opportunity to spend several segments of his show claiming that gangs of lesbians were taking over the United States. Several media outlets also used the term “wolf pack” to describe the group of women, drawing on a racialized term generally associated with men to capitalize on racist and homophobic stereotypes, in order to demonize them for acting in self-defense.

dorosh-walther breaks down the mainstream media’s depiction of the case and builds up the narrative the New Jersey Four never got to tell. She walks the viewer through the case and the appeals process, explaining how problems and inaccuracies in the initial trials led to convictions that were ultimately overturned or retried with outcomes of lesser sentences.

The process of making the film started after dorosh-walther had been working on the case for two years as an activist. She was initially hesitant to take on the project because of her position as a white director, but when the appeals process started in 2008 and both media attention and fundraising hit a lull, she decided to visit with the women, their families and their lawyers to see if they were interested in being part of a film. Hill talked about what it was like to meet dorosh-walther, talk about the case on camera and tour with it after it was completed.

“When blair started to get to know us first, so we could get to feel comfortable, that made it easier going in… we formed a bond with one another. At the beginning, we just wanted to get our side of the story out there, so people could get a better understanding of what actually transpired that night, instead of just going off of how the media portrayed us to be.

Having to relive that moment numerous times, speaking about it – it was hard, but I knew at the end of the day it would be worth it because of the outcome. …once it was completed, being on the road and seeing that so many other people were on our side and wanted to listen, that we had the opportunity to reclaim our lives and be seen as human beings – it was amazing. I never saw it being where it is today.” 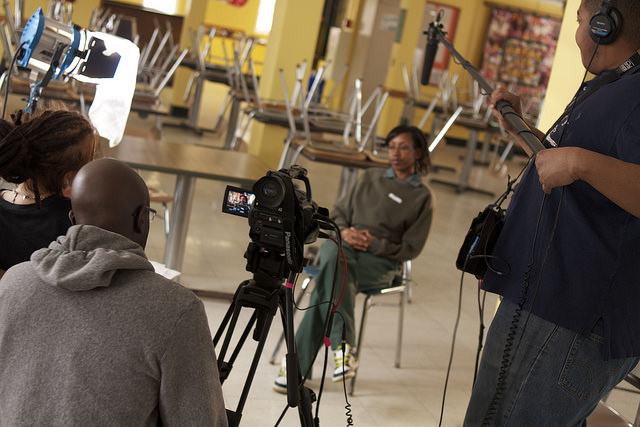 Following the broadcast, there will continue to be screenings of the film at colleges and universities, and an outreach and engagement campaign is in development, aiming to utilize the film to support and sustain work that’s being done on issues related to the film. Hill hopes the film will reach the President. “I think this should be pushed to the White House,” she said. “I want Obama to watch this on his big screen TV. I want him to look at his sisters and his daughters, and think, what else can I do to save women’s lives and lives in the LGBT community?”

Hill described how the film connects the attack on the New Jersey Four to the widespread violence that continues against black Americans: “As we raise awareness about our own documentary, we are given the opportunity to raise awareness about the other situations going on around us, like Trayvon Martin, Eric Garner, Mike Brown,” she said. “It gives this documentary and myself so much more purpose to be able to speak for those who can’t speak for themselves.”

The white supremacist terror attack on the Emmanuel AME Church in Charleston happened hours after I spoke with Hill and dorosh-walther. Out in the Night helps illustrate how, when we think about the murders in Charleston, we need to also be thinking about its wider context within a misogynistic white supremacist society that condones and permits violence against black people, and in particular black women.

dorosh-walther added in an email,

“My immediate response to the devastating attack on Emmanuel AME Church is the way in which the mainstream news is coddling and protecting Dylann Roof… #BlackLivesMatter is not just about caring that Black lives are lost to hate violence, it is the systemic racism that is infected in the mainstream news media and I think anyone not calling this a terrorist attack is helping to perpetuate a more dangerous environment. Just as I believe the articles that were written about the [New Jersey Four] helped created a more dangerous environment for queer youth of color and specifically Black lesbians.”

Out in the Night is a brilliant film that gives us the opportunity to hear from from Hill, from Johnson, from Dandridge and from Brown; and to be inspired by their resistance and survival in the face of violence and injustice.

Tune in to PBS or Logo at 10pm EST, TONIGHT June 22nd
Stream the film on PBS from June 23rd to July 23rd

Also remember that even if you don’t have cable, your family members, friends, or professors might. If you see them today or talk to them today, tell them this is on. It’s an opportunity for them to see and support queer media on Public Television.