Previously on Orphan Black, Helena’s imaginary friend, Pupok the Giant Bleeping Scorpion, soothed her nerves and her heart as she was trapped at Castor HQ inside a tiny wooden shoebox. Cosima came back to life only to have her heart ripped from her chest and stomped on by Delphine, who ripped out her own personal heart and stomped on it too, in the process of dumping Cosima, but For the Greater Good. After deciding to nominate herself for president of the school board, Alison pretended to be Sarah at Dyad so that Sarah could pretend to be Rachel at Dyad so they could thwart the most recent shady organization threatening to wipe the Toronto sestras from the face of the earth. And Castor Seth broke Castor Rudy out of Dyad jail. 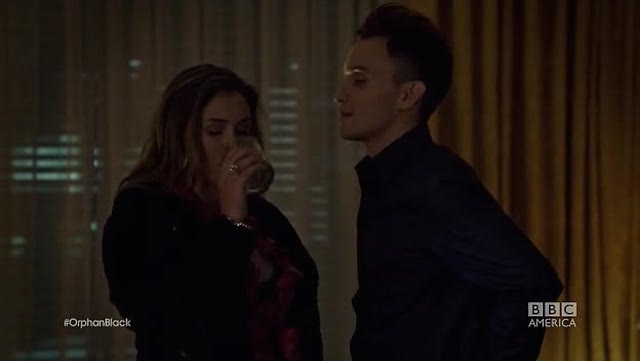 Right, so. Rudy gets a woman super drunk and brings her back to his place to rape her with the help of Seth. It’s gross and it’s terrifying, like some kind of sick bait-and-switch cat-and-mouse thing, and the woman is rightfully freaked out when Seth appears out of nowhere while she’s in the middle of having sex with Rudy. Seth says they were taught to share when they were growing up, so what’s her problem?

The next morning, Paul shows up to do his standard glaring and talk-growling like he’s a Chris Nolan Batman. He takes turns hooking Seth and Rudy up to a mind-reading machine and asks them brain teasers while some SoulVision goggles look inside their brains to see if there’s anything weird going on in there. Rudy is bored and over it during Paul’s exam, but Seth starts hardcore glitching in the middle of it. 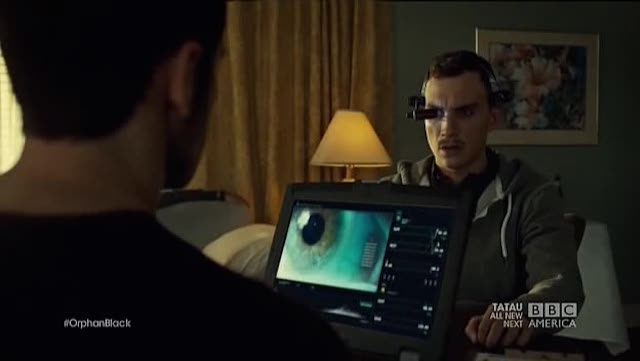 “No always means no. No never means yes. When a woman says no, did you just rape her?”

Rudy freaks out when Seth goes quiet because he knows it means his brother’s brain is cracked. Rudy tries to tell Paul they were out late drinking and and sexually assaulting and that’s how come Seth is having trouble concentrating this morning. Paul doesn’t give a shit. He slaps a couple of envelopes on the table and says they’re from Mother and it’s time for these Castors to go back home.

Sarah is taking a moment out of her quest to find Helena to hang out with Cal and Kira. Cal has purchased an apartment for the three of them, complete with an art studio for Kira and an indoor hockey rink. 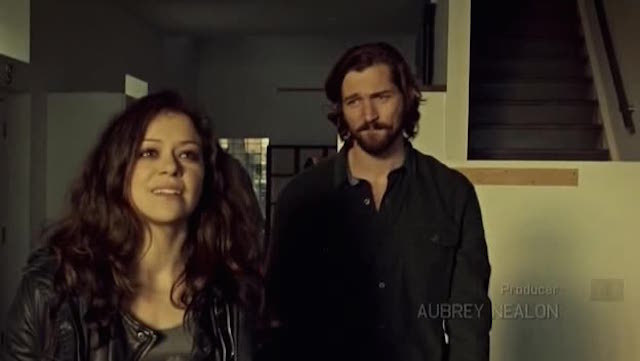 Honestly, any place where the front door closes all the way is an upgrade from living with Felix or Ms. S.

Sarah: I think you understand the fullness of what I mean when I say the only thing I like less than surprises is a promise from a straight man.
Cal: Okay, but like, I came all the way from the Dothraki Sea, where I was hanging out with the Khaleesi to make a home with you and Kira. A burned up baby had just fallen from the sky. The fighting pits were reopening.
Sarah: That’s the only place I’ve ever heard of that sounds less safe for Kira than Toronto. I’ll keep it in mind.

The three of them play hockey in their socks in the sunlight and laugh and smile, like a gaggle of goons who aren’t constantly being murdered by cult members and literal mad scientists. Then, of course, Sarah’s phone rings and it’s Art. He just wants her to know that a woman came into the station this morning to report being raped, and the guys who did it were twins who look just like Mark the Prolethean. (Remember when Art stood in that wheat field outside of the Prolethean compound last year for like two weeks, just staring at them with some binoculars, and then one day, Helena ran on by him on her way out of dodge? Remember when she ate all his snacks?) 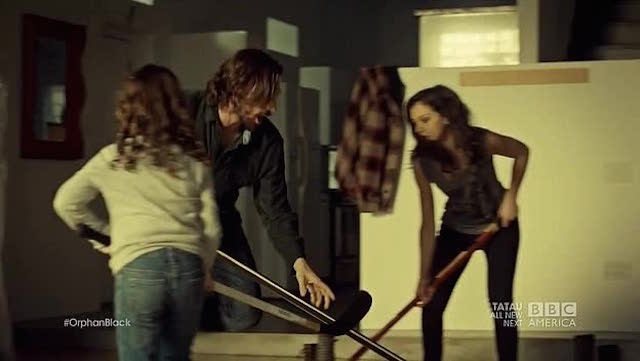 Well, and that is Sarah’s fun coming to an end for the day/her life. She leaves Kira with Cal and zooms down to the precinct to talk to Art in person. These Castor shitbirds could be the bridge to Helena.

Felix’s Loft of Homoerotic Shenanigans and Bare Butts. Scott arrives to give Cosima a check-up and is pleased to report that she’s getting less and less dead by the day. Pleased but stumped. The science doesn’t add up! Cosima isn’t interested in “science” so much as she’s interested in “being alive,” so she’s not worried about the logic for a minute. Felix can’t believe his ears. He’s halfway to signing her up for one of those witch classes where you do potions and talk to your ancestors when she tells him to slow his roll; she still wants to use her genius science brain to solve the mystery of Kira’s magical stem cells, and she wants to meet with Dr. Nealon over at Dyad to see what he knows about Duncan’s research. Before she and Scott head out, Felix gives her a new ClonePhone. Blue ones this season, and iPhones too. 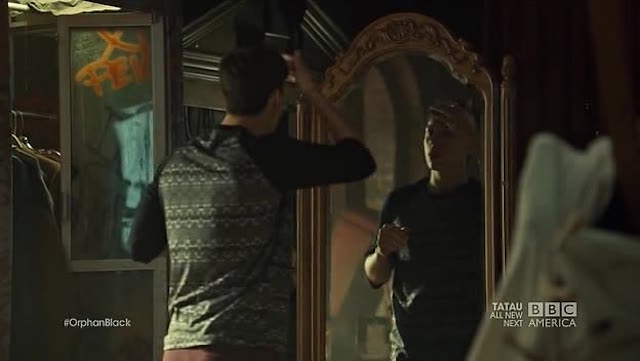 Mirror, mirror on the wall, who’s the gayest of them all? 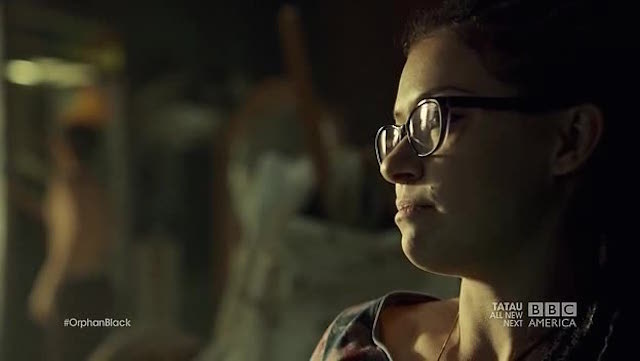 When you turn someone who looks like Evelyne Brochu, get back to me.

Soccer in the ‘Burbs.

Donnie: Since I still haven’t found a job and you refuse to go back to work with your mother at whatever amazing place Bubbles is, I think we should sell our house.
Alison: Good idea, Donnie. When we list it, should we mention that it is strewn with corpses?
Donnie: Oh. Oh, right.
Alison: How about you act like a team player for once in your life.
Donnie: I am a team player! Team Hendrix! I am so Team Hendrix! Fist me!
Alison: I’m sorry, what did you just say?
Donnie: Fist me! It’s what people say when they knock their fists together to show solidarity, like how President Obama does. 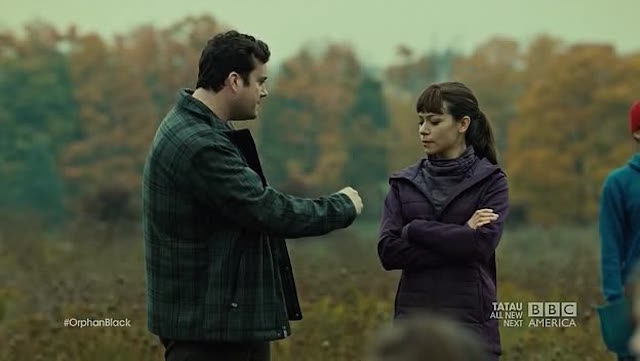 As Alison is waving like Regina George across the field at Marcie, Ramon toddles up to congratulate Alison on being clean for so long. She hasn’t called and asked him for any pills since she got out of rehab, so she must be standing strong, but just in case she’d like to know, he’s having a going out of business sale because he’s heading off to college soon and everything must go. He figured he’d hit her up first because he likes her best out of all the pill-popping moms at this soccer field, the grand total of which is: all these moms at this soccer field.