What’s that? That sad pitiful whistling noise? It looks like the Womp Womp train has made it to No1 Care station, because it’s a Larry scene. Larry’s at a gay bathhouse with his dad. For those of you who watched this scene and completely ignored the dialogue, thinking instead “Why don’t we have lesbian bathhouses? Why isn’t that a thing? Why don’t I get to go to a sauna and fuck a random chick while people watch us but pretend like they’re not watching us?“, it’s because no, don’t ask, and you don’t want to anyway. Bathhouses are, as far as I can see in my brief checking of Wikipedia, a dude thing. Their clandestine nature and ability to allow preciously incriminating activities to take place in safety make them them famous in gay male history, kind of like how we have vegan bakeries and zine libraries. Also, when was the last time you wanted to finger somebody in a slightly more visible version of the YMCA’s locker room? No, you’d rather eat goat cheese off each other’s nipples at a dog farm in Vermont.

I was gonna put an image here, but, um. Never mind.

Also, aren’t you glad you ignored the dialogue? Larry was telling his dad he was excited because he figured out how to get Piper off internally. Are you kidding me with this shit? The entire queer world just did a six-minute long Ursula laugh. Rookie bitch, please. 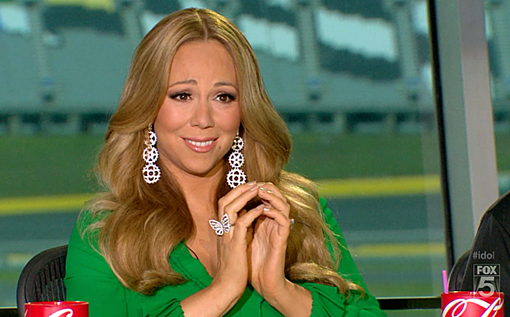 For those of you worried about Red, duh! We are all worried about Red, we are holding lesbian prayer circles and lighting lesbian prayer candles for Red. This lady was our favorite prison mother and now her roots are showing in a hardcore way, literally and figuratively. Her family has lost control of the business at home that was her pride and joy, her old prison throne has been handed off to someone else, and whatever friendship she’d found behind bars has abandoned her with a grudge. The fact that is becoming all too clear is that Red actually has a heart, and that’s why she can’t just ruthlessly fuck over everyone in her path. It’s something we love about her, but it also means it’s going to be a rocky road to the top, if she ever gets to the top again. 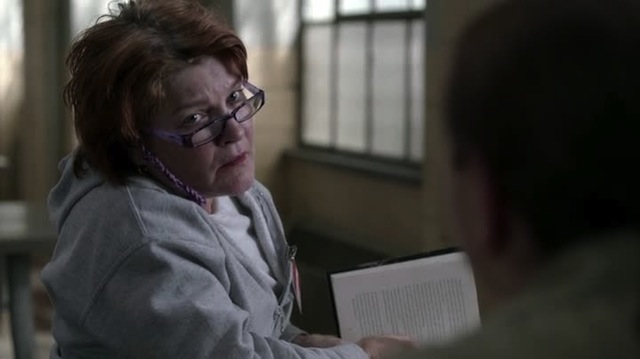 It was all so easy. I was the captain of my own life, I was drinking lots of coffee, I was helping out in situations that were coded for real life social issues, I was wearing a lot of red and black.

Long story short: Red is aching for a bitchy reveal and an emotional comeback like it’s the last twenty minutes of a Catfish episode. When we see how defeated and miserable she is, it eats us to our very core, right? As everyone else in prison whispers, it’s like seeing a bear going into hibernation. The table that was labeled the Golden Girls during Piper’s Season One introduction to everyone in the prison a la Mean Girls cafeteria scene is the same table that wants to acquire Red, but Red feels like while she’s slowly dragging her limp body up the hill, she is not yet over it. Hanging out with the elderly inmates would be a sign of complete defeat, and at least she’s not ready to admit that yet. Hang in there, baby girl!

If you were concerned about Daya’s bowels, a combination of yogurt and spices does the trick, apparently. And this causes Daya to play the peacemaker between her biological mother, someone who has not really been there for her ever, and Mendoza, who has had to give Daya a bit of mothering in the meantime.

Pennsatucky leaves solitary confinement to much fanfare and fear. Things in the laundry room have been pretty chill according to Leanne, and no one is actually looking forward to a walking Planned Parenthood protest showing up and yelling about purgatory all the time. Tucky seems to have turned a new leaf in her time alone, though, and part of that leaf was functioning with, like, three teeth. Healy has her into his office to confirm that his silent confirmation that she go right ahead and murder Piper in cold blood is a thing she needs to forget if she doesn’t want her ass handed to her in a gift-wrapped prison package. Tucky, not the sharpest tool in the shed but still a tad bit pointier than people like to remember, uses the bargaining chip of her real world weight to get herself some new teeth. Now she can make the methheads jealous and maybe get her mojo back. You go, angry scary baby girl. You shine like the little nickel I know you are, murderous feelings and all. 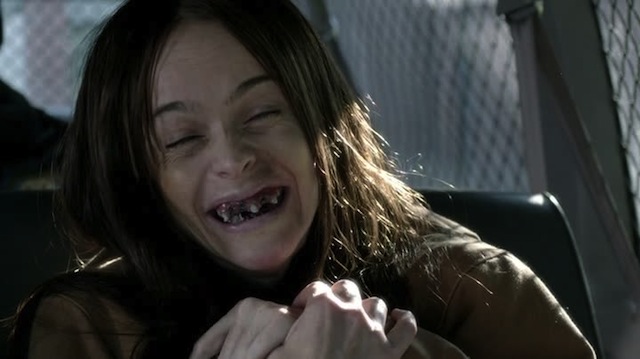 We found love in a toothless place. (Sorry, that is hands-down the worst caption I have ever made but I don’t want to change it because I need you to bear witness to me at my lowest moment, at the bare minimum of my pun capacities.)

Larry visits Piper’s friend Polly, whose boobs are fully exposed but she doesn’t care because new mom exhaustion and nipple confidence. Is it weird I’ve always found Polly attractive? Christ, I have the most intense fucking mommy issues. Larry stares at Polly’s boobs which I guess is meant to indicate it’s been a while since he had some? But also just comes across as come on, man, don’t be a gross weirdo over someone who you’ve known as a protective friend for a very long time. I’ve been celibate for like a month and a half and I’m not staring down the shirt of every Victoria’s Secret ad that comes in my Sunday paper, you know? 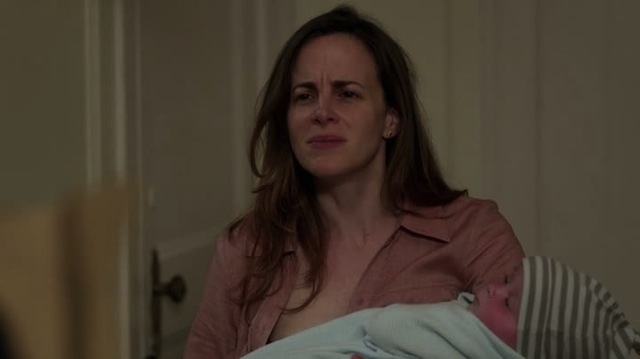 Taystee kicks absolute ass in the job fair, making Poussey so proud that my face actually hurt from how much Poussey smiling makes me smile. Poussey Washington has the greatest smile in the world. That is a goddamned irrefutable fact. I will defend this as fact until they put my cold dead 100 year old body in the ground when I am wizened and surrounded by all my great-great-grandchildren and their love for the old school show Orange is the New Black. And they’ll be all like, I don’t know Great-Great-Grandperson, Poussey’s smile is great but is it really the best? And I’ll say, kids these days have no respect, wearing their plastic trousers and listening to space droning and riding around on rocket scooters and eating their electronic ice cream, thinking Poussey’s smile isn’t the best goddamned smile that has ever been dreamed into existence. And then I shall shudder and shake a fist at the heavens and die. 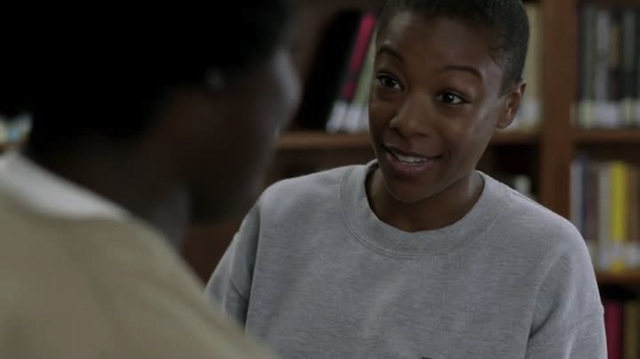 The bad thing is, the rumors Taystee heard about last year’s winner getting a job when she got out of prison weren’t true, and Fig shoots her down in the nastiest way possible. Fig is an unforgivable bitch, y’all. When you have utter and complete control over the lives of so many people, down to the conditions of the toilet in which they must shit, and you don’t give one single tiny little fuck about them, not even on the micro level? You’re a terrible person. If you fear people in power who don’t care one bit about those who are affected by their power, this show is probably one of the scariest on television. Even the reporter from last season’s NPR fiasco doesn’t shake her, and you know she’s cooking the books in the worst way.

Speaking of scary things, Vee is waiting just outside the chapel when Taystee finishes the job fair. And from the look on Taystee’s face, this is hardly a happy family reunion. If your nethers tingled with a sense of dread, your nethers weren’t far off! Tally ho to episode three, hoes! 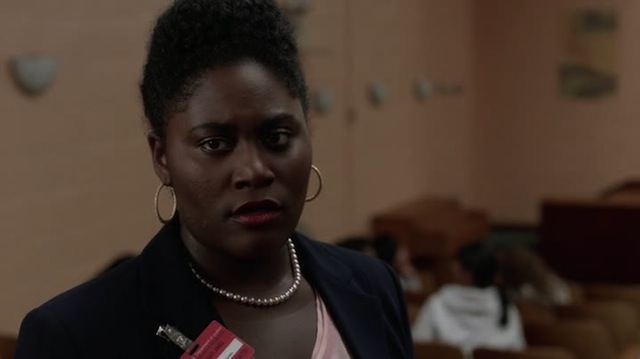 Oh, and and I should mention this before I forget because my mind wants me to forget. That whole scene with Big Boo was… yeah. No. As someone who is so obsessed with dogs to the point that people have to physically restrain me when I cannot pet a passing pitbull, no thank you. Please don’t do the thing with the dog, please. I know we all heard this urban legend in middle school but I think we also all knew even as wee baby middle schoolers that it was a thing we never wanted to see as part of our favorite gay television show. Vomity vomitous vomit.