Welcome back to the show you probably already binged last weekend but have been forced to never discuss by an army of coworkers and Facebook friends who can’t commit. Note: Yes, I have finished the entire season. By episode four, I was like, can’t stop, won’t stop, there is nothing you can do to prevent me from pressing ‘next episode.’ But because I love all of you like a giant homosexual family and I don’t want to spoil anyone who is reading the recap for episode two having only seen up to episode two, I’ll be treating plot turns and characters as if I know absolutely nothing of their fates later in the season. If you’ve also finished the season, you understand how gargantuan a task this is, and how much it pains me to pretend like I don’t know about absolutely crazy shit. Because shit does indeed get crazy, absolutely.

We start right out with a flashback, because Lesbian Jesus knows that this show does love its formulas. The best part is that the second this flashback’s spotlight child started singing Christina Aguilera, I knew without question that it was Taystee. That’s how goshdarn wonderful these characters are, so wonderfully written and portrayed that a single action lets us know exactly who we’re looking at and why what we’re about to see is important. The Taystee Formerly Known As Tasha is part of a “black adoption festival,” which is kind of like a job fair except instead of meeting prospective employers you meet small humans who need a family. 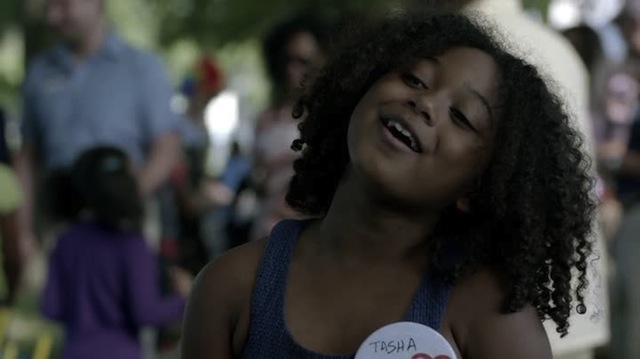 In addition to Christina Aguilera, my repertoire also includes Mariah Carey, Vanessa Williams, and that one song about letting my hair down with nothing but a t-shirt on I can say anything crazy I know you’ll catch me right before I hit the ground.

Tasha cusses out another girl in front of potential parents, and then she gives up on the fair altogether, taking her snowball and removing herself to a bench. Here she’s joined by a mysterious woman who we automatically want to love and trust and learn wise things from, because Lorraine Toussaint y’all! I don’t want to give too much away about this season, but her performance is mind-blowing and if she and Uzo Aduba aren’t showered with praise by every media outlet there is, I will no longer trust said media outlets. For those of you who were like, hmm, I like Lorraine Toussaint, and I like the older woman vibes, but I’d like to see some stud hotness, too, look no further:

Don’t pretend you are not fanning your goddamned self right now.

Now that you’ve taken a cold shower and resumed the episode, Vee and Tasha are still on the bench. Tasha calls Vee on her shit, saying she knows this lady’s a drug dealer, and despite the fact that Tasha’s a total math prodigy and not exactly swimming in options, she turns down the offer to get involved in the game. When Tasha says her snowball looks blue but tastes red, Vee gives her the nickname of Taystee. 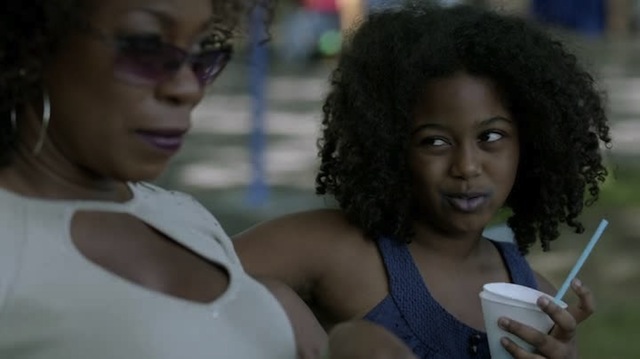 Not gonna lie, if part of this being your orphan henchman deal involves a bald girl with an amazing smile, I might be into it.

I want you to remember this small interaction because it will define every single tiny minute thing about Taystee for the rest of the season — the fact that she is capable of turning down Vee’s more superficial offers while never being able to shrug off the nickname Vee bestows on her. Taystee will always be too smart for some things, especially the business end of things, but it’s the emotional shit that trips her up and sticks to her like glue, reducing her to that same little girl on the bench whose ability to memorize the periodic table could never outweigh her telling someone to “fuck off.” Maybe the shaved ice was too clunky a metaphor for some of you, but I dare you not to think about how many people on this show have been locked up for looking just plain blue, when we’ve seen that their insides are a much more complicated and delicious blend of red. In all seriousness, though, this is the beauty of Taystee — Vee tells her she doesn’t need this shit, because it’s up to her to find her own “forever family,” and Taystee does exactly that. Queer structures of family, who the heck is with me?! And more importantly, we know who Taystee’s forever family is, and we’re rooting for them.

Litchfield, O Litchfield! How hast thee fared? Didst thou miss me? Much as I have learned over time to not only tolerate Piper but also genuinely enjoy what she brings to the show, a Piperless Litchfield is somehow the best Litchfield yet. If y’all are still thinking about whether or not to board the Season 2 train, let me convince you with two words: Ensemble. Show. This ain’t the Piper Kerman Hour of Power anymore. This is the Everyone You Love So Much Gets So Much Screentime Except Sophia But It’s Slightly Okay Because Laverne Cox Media Goddess Show. 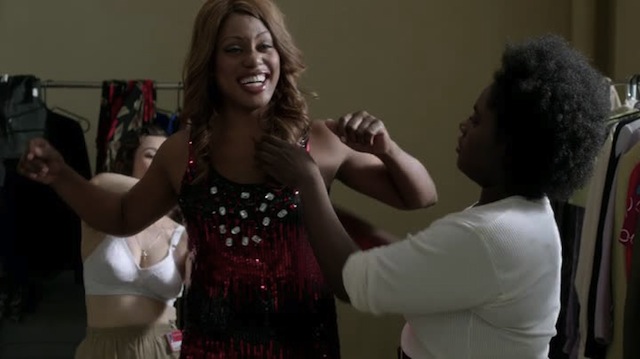 Sophia smiles and the entire world gets about eleven degrees hotter.

It’s Career Day and the lady from Dress for Success is here, bitching it up and forcing everyone to wear unwashed clothes. It’s not actually that bad, although the woman in charge is definitely a stuck-up freak. You have to love the heck out of Sophia for recognizing this as another bogus activity that can be usurped into dress-up time. Morello finds a sexy sailor Halloween costume, but it totally goes with her go-to red lipstick, so who’s not on board. Leanne is dressed in an outfit I’m pretty sure I saw my mom wear a lot in 1995. I don’t know, my family just stopped wearing shoulder pads last year. No one told us they were out of style, y’all! Nichols achieves Bette Porter Realness but Taystee makes sure she’s got the winning outfit from last year because Taystee is in it to win it. 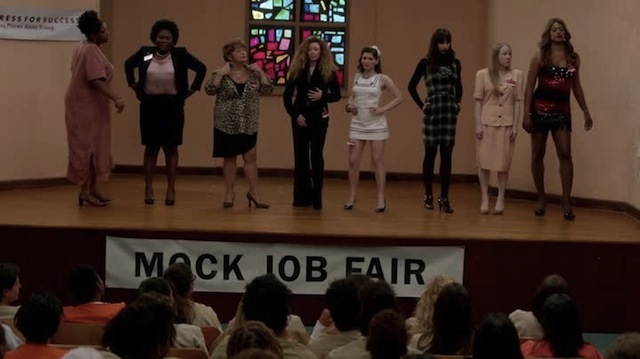 Is it weird that this looks like an “Every Girl I’ve Dated In My Twenties” thing?

Daya is mad constipated because I guess pregnancy causes constipation? Pregnancy is crazy weird, guys. Shoutout to my partner for 100% being ready to deal with that and any other complications my transferred egg causes. Anyhow, this is a real problem. Back in the day, I had a really bad stomach virus where I couldn’t stop throwing up and feeling like the entire world was not worth living, and my mother decided she was going to give me Imodium to stop me from throwing up. Big dumb move for my naive ass, because Imodium is meant to stop diarrhea, not vomiting. Needless to say, she gave me 3 of them, and I did not see the other side of my meals for about a week and a half. What a miserable painful time. I ate broccoli for every meal and cried a lot. So I feel you Daya, I do. 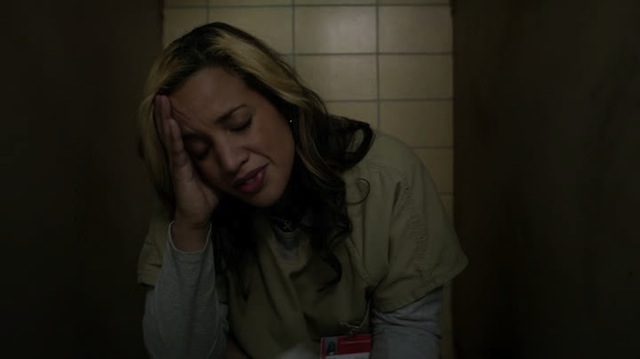 Flashback to younger Taystee trying to do honest work, but fast food pay and a shitty foster home situation are not cutting it. When the temptation of Vee’s offer is too strong to resist, Taystee proves her worth by doing insane mathematical figures in her head and demonstrating some very savvy business skills. Vee is impressed, impressed enough to offer her a place in her company as well as her home. And home is exactly what Taystee finds, with Vee seeming to balance both business and hominess pretty well in her set-up. Taystee gets to eat homemade dinners and come home to her own place, and Vee gets a brilliant sidekick. Even when we see the business taking its toll — RJ’s death deeply shaking Taystee, making her realize that the safety she feels with Vee is a illusion — Taystee lets Vee be her only source of comfort. No one could watch that and think that a relationship built on that much dependence could ever end well. 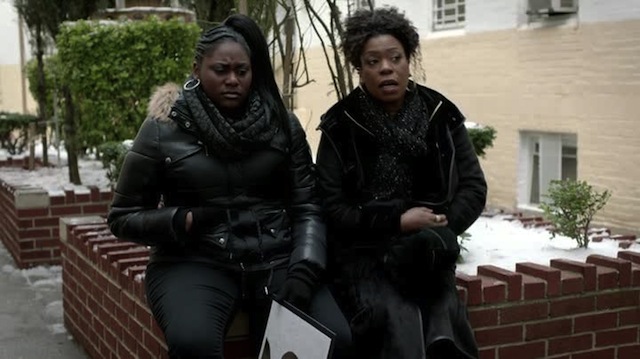 And I pinky promise that should I ever return to prison, I will not lurk outside your mock job fair in a way that indicates there is some level of animosity in our relationship without being up front about it.