The last time I got a haircut was in the middle of August on top of a roof by professional hair cutter & stylist Laura Wooley Mammoth and I was half naked. Look, here is a picture from that same day: 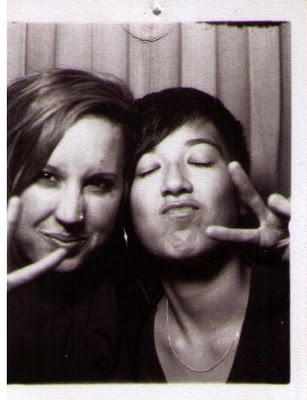 my hair stylist and I are closepersonalfriends

I usually get my hair cut every ~3 months, as my hair grows fast and it is also short which means that I have to cut it in order to avoid the shaggy dog look. But this year I moved out of my parents’ house. September, October, November, and parts of December happened, and by that I mean my life disintegrated to the point where I was a frumpy mess of clothes lying in bed wondering if I actually existed. In between this and trying to spend as little money as possible, I seriously considered letting my hair grow out. I have not had long hair since I was 17. Mostly every time I think about growing my hair out, I think about the shaggy dog phase and then decide that I don’t want to do it.

In November I asked for a haircut for my birthday, which I didn’t get. I don’t remember what I was thinking at the time. I think I just couldn’t be bothered to get a haircut / didn’t want to spend money on it / wanted my professional hair stylist to do it until I decided that I wanted to grow my hair long enough for a full ponytail and then cut it off.

Okay, most of that is bullshit.

Here’s what I noticed when I first cut my hair back in grade 11: people started calling me ‘sir’. I have never been called ‘sir’ until I cut my hair. I have to make a bit of a stretch to see where people get confused with my gender, but I can see it. I get it, kind of. One might say that I have an androgynous face. I don’t know. Some people are surprised when I tell them people call me ‘sir,’ some people are not. 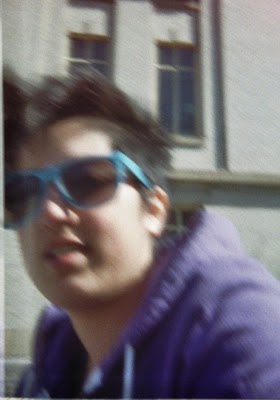 I also noticed that when I got a fauxhawk, I got called ‘sir’ a lot more, especially at work. This led me to wear v-necks and boots with heels more often.

You see, this is the truth: part of me is afraid I am growing my hair out because I want to “pass.” I’m afraid I’m doing it for the wrong reasons. Semi-consciously I’ve tried to pass at work because let’s face it, it’s fucking awkward when customers realize you’re not actually a ‘sir’. I’ve spent most of my life wanting to fit in with the “normal” kids, but I could never wear the dresses or heels or 234 different kinds of make up. But I could have the long hair. Right? A teeny tiny part of me wants to be normal.

People associate long hair with femininity. If you’re a girl with short hair, you have to have some other sort of “feminine” aspect, e.g. earrings, flowery dresses, shiny hairless legs, lipstick. See, in our world, most girls = long hair. Boys = short hair, and no one has to think too hard.

But really, I want to be a person who is not afraid to be herself. Sometimes I am. I want people to recognize that there is more than one way of looking like a girl. I don’t want to pass.

On the other hand, I want people to see that lesbians can have long hair.

On the other foot, I don’t want my hair to be my identity. Does anyone really care about my hair that much? So while I sit here pondering the meaning of my existence, my hair is growing longer. It’s in a ponytail and it’s really cute, if I may say so myself.

The other truth is that I will probably cut it all off and run rampant like a good angry queer feminist with a radical homosexual agenda and sweet combat boots.

JK about the combat boots.

I feel like you may have some hairstyle-related feelings and I think you should share them in the comments.