This past July was declared “Ex-Gay Pride Month” by the group Voice for the Voiceless, which claims to “defend the rights of former homosexuals” and “defend the constitutional rights of all Americans to share their views of homosexuality in the public forum.” It all culminated on July 31 when thousands of members of the ex-gay community were expected to march on Washington and attend a dinner and reception featuring such speakers as Congresswoman Michele Bachmann and former Senator Jim DeMint. However, all of this quickly fell apart. First, it was reported that most of the headline speakers, including Bachmann and DeMint, were only invited and had not even confirmed that they would attend. Next, Voice of the Voiceless claimed they were being threatened by “anti-ex-gay extremism” and had to postpone and move the dinner and banquet to an undisclosed location. The final nail in the coffin happened on the day of the march when only about ten protesters showed up to show their support.

Even though they were facing all these problems before the 31st, Voice for the Voiceless still claimed that “thousands of ex-gays” were going to show up. And although less than ten actually were there, the group is still trying to claim this as a victory. They say that the existence of one ex-gay person is proof that the therapy works, rather than evidence that sexuality can be fluid, or that bisexual people exist, or that some people choose not to have sex or be in a relationship. Christopher Doyle, the group’s president, continued his barrage of nonsensical statements by saying that ex-gays should be designated a protected class. “We want federal protection just as gays are given… we’re discriminated against because we’re former homosexuals and we dare to have a different viewpoint,” Doyle said. He never made it clear what discrimination or persecution ex-gay people face, or whom they need protection from. 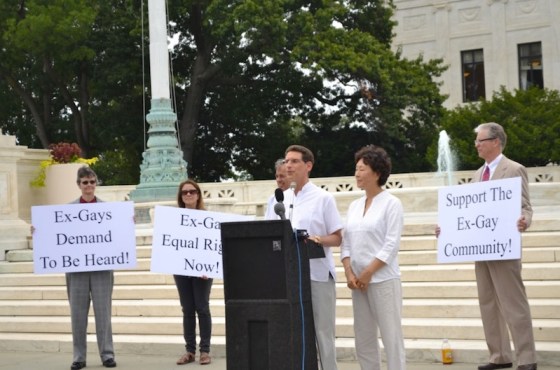 This is just the latest story in what is hopefully the steady decline of ex-gay ministries and therapy. There was a time in America when many Christian churches embraced the idea that you could “pray away the gay.” But with the percent of Americans who think being gay is a sin dropping, and the percent who support gay marriage rising, things are looking up for LGBTQ Christians and LGBTQ people living in Christian households.

Several Christian groups who once led the ex-gay charge are now changing their tune. Back in June, Exodus International, one of the largest and most prominent Christian groups that offered a “cure” for being gay announced it was closing down. In addition to shutting their doors after more than three decades leading the ex-gay movement, many of the leaders apologized for their judgmental and dangerous actions. Former chairman John Paulk said that he believes Exodus International’s actions did more harm than good.

Today, I do not consider myself ‘ex-gay,’ and I no longer support or promote the movement. Please allow me to be clear: I do not believe that reparative therapy changes sexual orientation; in fact, it does great harm to many people.

Churches aren’t the only ones enacting change. One of the largest steps in the decline of ex-gay ministries happened when California passed a law banning so-called “reparative therapy” for minors. This form of therapy, also called “gay conversion therapy” is described by the majority of mental health groups as being dangerous and ineffective. The passage of this law was hailed as a victory for LGBTQ rights groups, the mental health community and child advocacy groups. But not everyone is happy. people on the Far Right and some Christian groups are saying that this ban violates their First Amendment rights. Although this law is currently being challenged in courts by conservative groups, similar laws are being considered in Massachusetts and New Jersey.

Despite all of this, Voice for the Voiceless still thought that their Ex-Gay Pride events would cause a resurgence in the movement. This was supposed to be their big “coming out” day. It was supposed to draw thousands of participants and massive media attention. Instead, by having such a small showing and weak presence, the group revealed what many of us have known all along: they are a fringe group whose time is coming to an end.