For nearly ten years, I’ve been privy to one of the best-kept secrets in rock’n’roll. 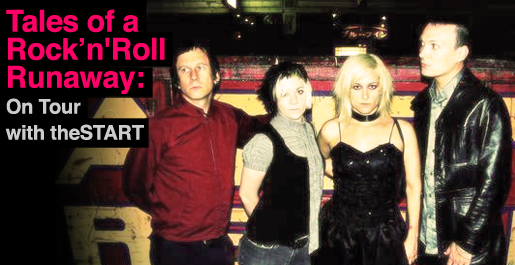 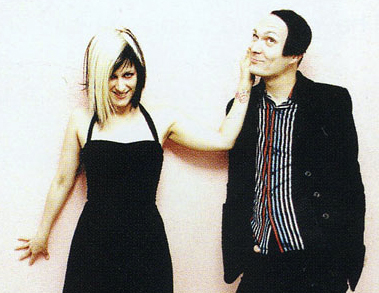 Jump into our musical time machine and turn the clocks back to 1998, the days when rap-rock was king and Limp Bizkit were poised to become gods among men (I know, it’s a painful memory, but bear with me).  Somewhere in Southern California, a fateful meeting took place between singer Aimee Echo of Human Waste Project and drummer/multi-instrumentalist Jamie Miller from Snot.  Echo and Miller were both often lumped into the Ozzfest category with their previous bands, but they not-so-secretly shared a passion for bands like Depeche Mode, Siouxsie and the Banshees and Roxy Music.  When they started making music together (with Jamie on guitar and keys), they named their new project theSTART: music from the future.  The resulting sound fell somewhere between punk and new wave, mixing modern guitar-driven rock with retro synthesizers under Echo’s rasping, distinctive voice.

As their bio points out, theSTART were among the first crop of the “new new wave” of the early 2000s, joining bands like Le Tigre and the Faint.  When I discovered the band in 2000 or so, I fell in love with them in that special way that only a teenager can.  I got to know Aimee Echo and Jamie Miller when I was a geeky 17-year-old fangirl, and over time our relationship has grown from nerdy hero-worship to a very respectable, adoring friendship.  When I graduated from college, they offered me my very first tour; I got to ride around North America in the van and sell merch for one of my all-time favourite bands on North American tours with Goldfinger and Head Automatica (stay in school, kids!).  Although they’ve opened for some of the biggest acts in the business (Weezer, Garbage, Incubus, Alkaline Trio, the Offspring, AFI and Joan Jett, just to name just a few) and their songs have appeared in TV shows from Smallville to The L Word, they’ve never become a big name themselves – instead, they’ve become something of a cult classic.  For years, their fans referred to themselves as the society of modern-day heretics; joined by our dual loves of liberal politics and anthemic dance music, we formed a dedicated community around this band who so deserved to be huge.  Nowadays, when the band play anywhere within a 250-mile radius of New York City, I’ll often pack a backpack, show up only vaguely announced, and ride from show to show with the band, earning my keep loading gear and running the merch booth.  It’s a win-win for both of us. 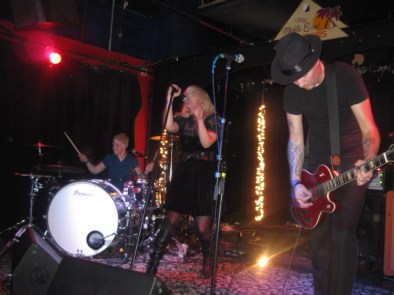 This brings us to the present day, where three full-length LPs and several line-up changes later, theSTART are in the midst of a very unusual tour.  Bassist Lance Webber’s gone back to college, and instead of finding a replacement, Aimee, Jamie and drummer Chelsea Davis have begun working as a three-piece side project called Normandie.  Normandie is a different creature altogether – dreamy and brooding, drawing comparisons to bands like Blonde Redhead, School of Seven Bells and Placebo.  On this particular tour, the band are traveling sans bass player, as well as opening for themselves. This is confusing for everyone – at nearly every venue, the sound crew will load us in, and then ask when we think the “other” band will arrive.  Kids at the shows don’t dance much during Normandie, but they listen attentively and nod their approval.  It’s something new.

“Thrill of Victory” by Normandie

Without a doubt, the band’s secret weapon is bright-eyed 25-year-old drummer Chelsea Davis.  Chelsea was raised a strict Mormon in Salt Lake City, before leaving the church in pursuit of rock’n’roll immortality. She freely admits that her family were initially upset with her choice, but this girl was clearly born to play the drums and is living the life she was meant for.  Since running away to Los Angeles to join her favourite band, Chelsea’s changed her personal style a bit – her hair is short, black and blonde and she’s gotten a few more tattoos, but she remains one of the heaviest-hitting drummers I’ve ever seen.  Unfortunately, people have a lot of pre-conceived notions about female musicians, especially female drummers, but Chelsea’s no-holds-barred assault on her drums quickly dissolves any doubts one might have.  She exudes a natural confidence that makes it look easy.

At least once a night, an audience member or club employee will approach me and incredulously tell me how out-of-control incredible Chelsea is. In Boston, an inebriated gentlemen shouts repeatedly that the drummer is “SO FUCKING HOT!”  The compliments cause her to blush a little, but she never lets up on her kit.  The girl’s a monster.

The boy in the yellow shorts agrees with me!

Touring sounds glamorous, and lots of my friends are jealous, but mostly just because I’m out of the New York humidity for a few days.  In practice, it’s a lot of driving, a lot of hauling gear, and a lot of waiting.  I fold a lot of t-shirts and make small-talk with total strangers whose names I’ve already forgotten.  During the shows themselves, I break out to watch the band and dance, but once they’re done I get slammed – I barely have time to talk to whatever friends of mine have made it out to the gig.  At some shows, the house is packed with kids, and at others, 20 die-hards show up and sing along to every song.  The band puts on a stellar performance regardless of the crowd; these guys are pros and it shows.  Although I’m filthy, sweaty and sleep-deprived, I am loving every second.  If it was easy, it wouldn’t be rock’n’roll. 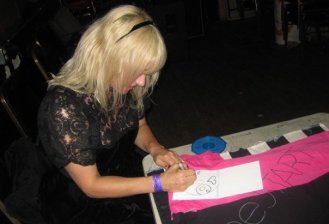 At the merch table, theSTART offer a list of all their out-of-print songs, rare b-sides and covers.  For a dollar a song, fans can pick out their own bootleg record.  I burn individualized CDs, while Aimee, Jamie and Chelsea hand-sketch the artwork.  Since the band tour with virtually no label support or publicity, people generally find out about their shows through word of mouth.  It’s personalized efforts like these make these kids into loyal fans for life.  Aimee mentions this during theSTART’s set, then pauses to thank the fans who’ve stuck with them all this time.  She jokingly uses an old Alcoholics Anonymous adage: “Keep coming back – it works if you work it!”

Truth be told, I’m a little heartbroken when my tour of duty ends at the M Room in Philadelphia.  The band(s) will continue down South, then work their way back to California.  As for Normandie,  Aimee, Jamie and Chelsea are currently hard at work on a debut album, but recognize that its release may get pushed back due to touring commitments.  They’re in no rush, as they’re excited about the new direction and want to give the material time to come into its own – to “grow feet,” as Aimee explains it.  Both of her previous bands were signed within a year of their inception, and Echo’s in no hurry to force anything out of Normandie.  She has a curious habit of anthromorphizing Normandie, describing her as a “nice girl.”  Aimee’s curious to see how her personality develops, and so am I.

Normandie and theSTART are currently on tour.  Dates are available at their MySpace.  TheSTART’s most recent album Ciao, Baby! is out now on Metropolis Records.

Join A+
Related:beat on the street