Perhaps you already heard this one, but Autostraddle celebrated our 10th birthday last month. As a part of the festivities, we created The Autostraddle Yearbook – a digital archive of not only our own work, but also the last ten years of queer women’s pop culture. That’s how this debate originally started. You see, our Editor-in-Chief, Riese Bernard, was 100% positive that the 2012 political satire Butter was in fact, gay.

None of the rest of us even remembered the movie existed! I decided to investigate.

Butter was a blink-and-you-missed-it indie comedy starring Jennifer Garner, Ty Burell, Olivia Wilde (say her name three times and a queer woman who experienced her coming of age in the 2000s will appear before you in low cut jeans and heavy black eyeliner. I don’t make the rules), and – this is what really floored me – Yara Shahidi, black America’s celebrity girl next door of Black-ish  and Grown-ish fame, when she was still just a little pint sized Yara. Oh my goodness. So cute! So little!

The film takes place in rural Iowa during State Fair season. Jennifer Garner is a local politician with big ambitions and her husband, Ty Burell, is a master butter sculptor who has won the state competition for the last 15 years! Yara Shahidi is Destiny, who’s spent most of her young life in and out of foster care, but is somehow still a natural for the for the art form. The art form of butter sculpture. Hard core, Sistine Chapel worthy, butter sculpture.

Yes, I am serious. 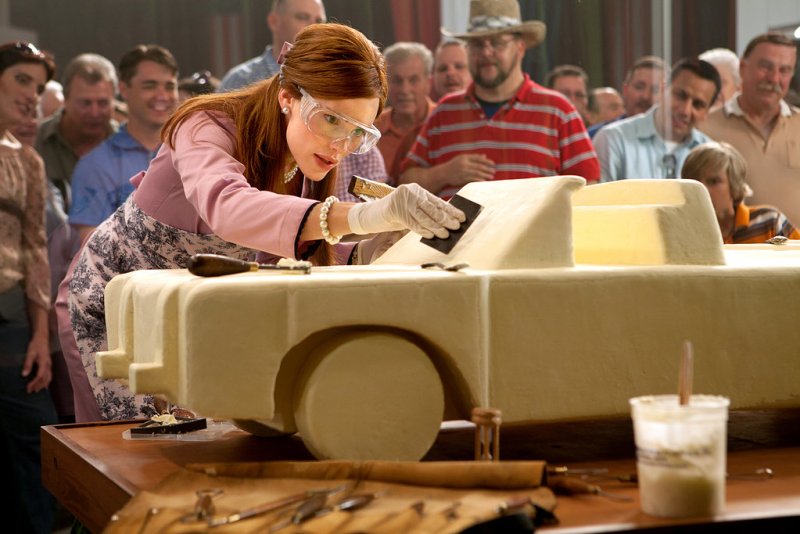 Y’all, I thought I was Midwestern. I grew up in Michigan and went to college in Minnesota. I’ve been to all the State Fairs. I’ve eaten everything that’s ever come on a stick. This is a whole next level of Midwestern that I didn’t even know about! And thank goodness it exists. Because that means this movie exists. And you really, really want to see this movie.

Olivia Wilde is Brooke, a bisexual sex worker who starts the movie with Ty Burell as her client. She ends the film with a female client that I won’t spoil because it came as a total surprise to me and I don’t want to ruin it for you! Basically, the name of Brooke’s game is righteous disruption. She’s ready to tear down the picture perfect hypocrisy in this small town. Jennifer Garner’s dead on Sarah Palin/ Michelle Bachmann rip-off goes around in pretty three piece pink suits that mask her ruthless true intentions while saying things like, “Don’t worry, I am not a feminist.” Olivia Wilde saunters into the competition in a mid-drift tank top with no bra and saying shit like this:

So really, what else do you need on a Saturday night?

Brooke ultimately becomes a bit of a fairy godmother to teeny-tiny Yara. When their subtle, but heartfelt team up finally happens, all bets are off.

The entire plot for Butter is the kind of wackadoodle delight that one should really experience with fresh eyes and their feet up on a couch with a bowl of junk food at their disposal. The narration delivered by Yara is some of the smartest, double-take worthy, “I can’t believe she really went there”, black girl monologuing that I’ve heard in a long time. All of the hot take political comedy (that I think was originally designed to push up against the waining years of George W Bush era America) only triples in sharpness when placed against a Trump backdrop. That alone is worth your time.

BUT before I get out of here, let’s talk about this cast: In addition to Jennifer Garner, Ty Burell (what’s up Modern Family! And I mean that shout out to the early years, when it was still funny), Yara Freakin’ Shahidi, and the patron goddess of so many of our dreams Olivia Wilde, you are also going to find The Wolverine Himself Hugh Jackman, Kristen Schaal (you probably know her as the voice of Louise Belcher in Bob’s Burgers) AND THE ONE AND ONLY CHER HOROWITZ AKA ALICIA SILVERSTONE!! It’s as if someone decided to play a game of mad libs with the top comedic talent of the last 25 years and this cast popped out!

The movie only has a 34% score from Rotten Tomatoes, and for the life of me I cannot imagine why? Probably because most Rotten Tomato critics are straight white men, and straight white conservatism is thoroughly lampooned in this film from beginning to end. When you’re not in on the joke, you’re just not in on the joke. Thankfully that’s not going to be a problem you’ll have. Don’t take my word for it, watch the trailer.

You can watch Butter on Netflix at any time. It’s worth it and you deserve nice things.