Hey Americans! Remember when you had [the promise of] healthcare? Or more specifically healthcare that you could, like, afford? Yes, we remember too. The heady days of calling excitedly to schedule dentist appointments, the freedom of knowing that you could potentially break a kneecap or rupture a vital organ at any time and be optimistic about receiving lifesaving care. Well! That was nice, wasn’t it.

Unsurprisingly but still upsettingly, the Republican majority in the House does not want this to happen, or in their words, plans to “repeal Obamacare.” I will be honest from the start and admit that I am not really sure how this happens; to the extent that any of us understood what happened with healthcare before, I think we felt that something was settled. But apparently not.

Mostly, my ability to report on this subject was severely hindered by the fact that although I remembered vaguely supporting it, I could not articulate a single point of “Obamacare” or remember what it specifically entailed. So by literally typing “what is obama’s health care plan?” into Google, I was rewarded with this document helpfully titled BARACK OBAMA AND JOE BIDEN’S PLAN TO LOWER HEALTH CARE COSTS AND ENSURE AFFORDABLE, ACCESSIBLE HEALTH COVERAGE FOR ALL. It’s actually only 9 pages long, and probably it would be best for everyone if you read it. But if you’re not going to, here are some highlights. The most basic explanation of all:

Barack Obama and Joe Biden’s plan strengthens employer–based coverage, makes insurance companies accountable and ensures patient choice of doctor and care without government interference. Under the plan, if you like your current health insurance, nothing changes, except your costs will go down by as much as $2,500 per year. If you don’t have health insurance, you will have a choice of new, affordable health insurance options.

Specifically, they planned on:

+ adopting state-of-the-art health information technology systems
+ ensuring that patients receive and providers deliver the best possible care, including prevention and chronic disease management services
+ reforming our market structure to increase competition; and offering federal reinsurance to employers to help ensure that unexpected or catastrophic illnesses do not make health insurance unaffordable or out of reach for businesses and their employees.

Some of the parts of this plan already are already in effect, like “allowing young people to stay on their parents’ health insurance until age 26, improving drug savings for the elderly on the government’s Medicare insurance program, and creating temporary high-risk pools to help people with medical conditions obtain health coverage.” Others weren’t scheduled to be implemented til 2014. I could point out that nowhere here is “creating panels to vote on the state-sponsored murder of old and infirm people,” but I won’t, because I like to pretend that we live in a world where I don’t have to. Anyways! That is a fun read, I genuinely think you should take the time to read it. Because God knows none of the Republicans in the House have. From Reuters:

“The tree is rotten, you cut it down. If we can’t cut it down and succeed doing that all at once, we’ll prune it branch by branch,” said House Ways and Means Committee Chairman Dave Camp. His is one of four committees tasked on Thursday with rewriting the healthcare law. “Today is day one of our efforts to replace Obamacare with something better,” Energy and Commerce Committee Chairman Fred Upton said, using a derisive term for the healthcare law. 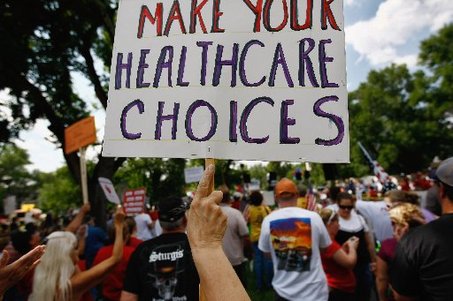 The House has since voted 245-189 to repeal the plan. The Senate is still Democratic by a narrow margin, and is not expected to vote in favor of the bill; even if they did, Obama would pretty much certainly veto it. So, the good news is the headline “House Passes Repeal of Obama’s Healthcare Law” isn’t actually as ominous as it seems. Also, one of the paltry silver linings of the massacre in Tucson is that Washington is still operating under an atmosphere “respectful debate” and “civility” for now, which means that no one has brought posters of Obama with a Hitler mustache or a loaded firearm into Congress yet.

So what’s the point of this repeal bill if they know it won’t pass? Well, it does look at the very least like they’ll be successful in terms of forcing some changes. House Democrats say they expect Obama to lay out modifications to his plan in his State of the Union address next week, and hearings will begin soon on changing any number of things about the law that’s currently in place. Basically, the Republicans are sending a message here, clearly demonstrating their intent to use every trick at their disposal to slow down and frustrate Democratic initiatives they disagree with.

Even if this bill doesn’t work the way Republicans would ideally like it to, that doesn’t mean the Affordable Care Act (as it’s officially called) is safe from repeal: Jonathan Cohn of The New Republic has written an exhaustive explanation of the legal standing of the law, and how if the Republicans are committed enough, it may end up in the Supreme Court defending its constitutionality. The key issue is the mandate that every individual must be insured by either the government or a private company; the insistence by the government that everyone must have health insurance. It’s that part that many Republicans and Tea Partiers protest, and what may end up being the deciding factor in how we do healthcare in this country from now on.

But neither the Constitution nor the judges who have interpreted it ever suggested the government had the right to regulate non-activity—which is a fair description, according to these lawsuits, of a decision not to obtain health insurance. Like many good constitutional arguments, the argument can be put a lot more simply: If the government can penalize you for not buying insurance, can it also penalize you for not buying a television or a GM car?

Which, of course – and not to make this whole thing fraught with more tension than it already is – just ends up tossing the ball back into the Supreme Court’s court once again. All our eyes are turning to the Supreme Court Justices for more and more far-reaching decisions about our future – Prop 8 is likely headed there, which means DOMA could be as well. In the next few years, those nine justices could be deciding the legal status of our families, as well as whether we’re able to have any kind of support for them if they get sick. It really brings all that back-and-forth about Sonia Sotomayor and Elena Kagan into a whole new light, huh?

The takeaway here is that we have no takeaway. We don’t know what’s happening; no one actually knows what’s happening, not the President of the United States or any of the other smartest people in the country. Everyone is very scared and loud and opinionated. We have all had a tough few years, maybe a tough decade or just tough lives, and we don’t have a lot going for us right now and are angry because we worry that someone is going to take away the few things we do have. A lot of us are poor. Some of us are sick, and the rest of us are afraid of getting sick. That’s really all we can report from the front. We hope that people will be both psychologically and emotionally sane; we hope that everyone can be cared for, by the medical community and the people in offices in Washington and by their friends and families and neighbors and that all of us can remember to take care of each other. As a Mr. Barack Hussein Obama said earlier this week:

“As we discuss these issues, let each of us do so with a good dose of humility. Rather than pointing fingers or assigning blame, let us use this occasion to expand our moral imaginations, to listen to each other more carefully, to sharpen our instincts for empathy, and remind ourselves of all the ways our hopes and dreams are bound together… what matters is not wealth or status or power or fame, but rather how well we have loved, and what small part we have played in making the lives of other people better.”