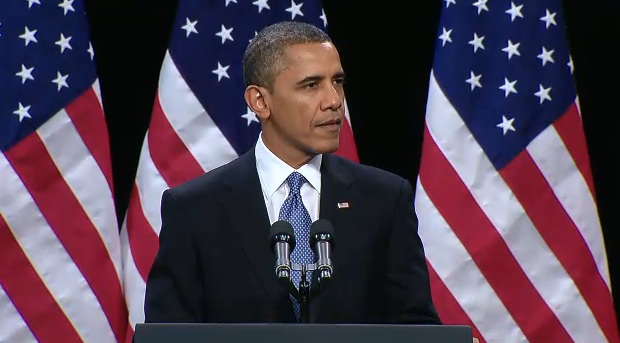 Obama makes his announcement.
via salon.com

Yesterday, President Obama made the commonsense yet somehow still controversial announcement that when it comes to immigration, it’s important that “the United States treat same-sex couples the same as other families, meaning that people would be able to use their relationship as a basis to obtain a visa.” As a Canadian, I find it ridiculous that binational American same-sex couples still don’t have the same immigration rights as heterosexual ones. Under the Family Class of the Canadian Immigration System, a person has been able to sponsor a spouse, common-law, or conjugal partner for immigration without regard to the gender of his or her partner since 2002. Even in the UK, where same-sex marriage is still not legal, the border agency states that “the requirements and process for applying as an unmarried or same-sex partner are the same as those for a [heterosexual] partner but the documents you must provide will be different.” Australia became one of the first countries to consider a same-sex relationship as a valid reason for migration all the way back in 1985. You’d think Congress would be embarrassed to be lagging behind on this human rights issue, and would therefore want to utilize basic kindergarden skills such as cooperation and teamwork to get Obama’s same-sex couple immigration reforms made into law as soon as possible. Unfortunately, working together is not one of the strong-suits of the bipartisan government, and Congress, as usual, is divided.

Trying to understand why it’ll be such a struggle for Obama to pass immigration reform is confusing when right now, here in Canada, it’s hard to keep up with the speed at which the government is turning bills into laws. It seems every morning I wake up to an “exciting,” brand-new legal change to the country: No health care for refugees! No Navigable Waters Protection Act! Goodbye Native American treaty rights! Meanwhile in the U.S., Obama’s bills crawl slowly through the House and the Senate, dreaming of and praying for the day when they’ll be able to be real, grown-up laws! While Harper manufactures dozens of bills into laws at once, effectively ruining Canada with the efficiency of a top-rate assembly line, Obama’s ideas to improve America are endlessly debated, critiqued, poked and prodded. I’m not saying this is a bad thing. Canada could certainly benefit from stepping back and slowing down; but it does make me wonder how long Americans separated from their same-sex foreign spouses will have to wait before they get some pretty basic human rights met.

Why is it so difficult to get a bill passed that would allow families to stay together and allow the US to retain residents who can contribute valuable things to the country? Well, although Democrats hold the Senate, the Senate immigration group, which is made of Republicans and Democrats has proposed immigration reform that, unlike Obama’s proposal, does not recognize the immigration rights of same-sex partners. However, some individual Democrat lawmakers are in favour of those rights and are telling American gay rights groups that binational same-sex couples will be included in a final draft of the immigration bill.

Unfortunately, good-old Republican John McCain, also a part of the Senate immigration group, is saying that this whole business of some Democrats wanting to give gay couples rights is a “red flag” and means bad things for the country. Most politicians in the Senate immigration group believe that before there is immigration reform, there needs to be additional border security and improved tracking of illegal immigrants. It wants to require immigrants who may be in the country illegally “to register with the government, pass criminal and national security background checks, pay fees and penalties as well as back taxes, and wait until existing immigration backlogs are cleared before getting in line for green cards.” Meanwhile in the White House, Obama wonders how long doing all of that is going to take. He doesn’t want to wait for the so-called perfect conditions set by the Senate immigration group before passing immigration reform. He said that the Senate’s pathway to immigration is too long, complicated, and out of reach for many people: “We all agree that these men and women have to earn their way to citizenship. But for comprehensive immigration reform to work, it must make clear from the outset that there is a pathway to citizenship.” If congress keeps on arguing over immigration, Obama has declared he will just write his own bill and insist that it’s voted on right away. Of course, with a government so divided, there’s no guarantee that it’ll pass.

And even if it is passed, it’s unclear how it will interact with the DOMA. As Olga explains in “Immigration Reform is a Queer & Trans* Human Rights Issue,” DOMA prevents cisgender, same-sex partners from sponsoring one-another for marriage-based immigration. Also,

“…domestic partnerships and civil unions are also not recognized. Perversely, the ban also excludes the spouses of queer refugees who have been resettled to the U.S. as a direct result of fleeing persecution based on sexual orientation.”

DOMA is currently being challenged in the Supreme Court and by the proposed Uniting American Families Act (UAFA) which would allow same-sex couples to side-step DOMA. Strangely, even though Obama has spoken out for same-sex immigration rights, it doesn’t seem like he’s including the UAFA, or anything similar, in his immigration reform plan. Is this because he doesn’t need to? If passed, will his immigration reform plan render DOMA obsolete? If America has two laws which contradict one another, which one gets to win?

The concept that same-sex couples shouldn’t have to go through something as life-altering as deportation when their straight counterparts are exempt from it seems like a no-brainer, especially when the President and the Department of Justice have acknowledged that Section 3 of DOMA is unconstitutional. But equal rights for gay couples and immigration reform have proven to be two of the issues that Republicans are most unwilling to compromise on, and progress on the combination of the two issues has proven truly Sisyphean in terms of how incremental and unsatisfying it feels to those impacted by it. There’s no way to be sure that this will be the time it works; that Congress will be able to agree on something, that the politicians who have promised to have Americans’ backs in later drafts will come through, or in the event that those things don’t occur, that Obama’s solution will be preferable or even able to pass. But it’s a comforting step forward that this issue has reached the level of national conversation, and with the momentum granted by a second-term president who doesn’t have to secure votes for a future election, we can at least think about hoping that this might be a moment of real change.