In the aftermath of the Steam winter sales I find myself with a surplus of games that I do not remember buying. Many of them I don’t really remember having seen or heard of before. But apparently they sounded good for some reason at some point and I can comfort myself with the possibility that maybe someday they’ll come in handy and at least they don’t take up physical space like the switchblades and belt buckles and basketball cards still following me around from my Ebay phase.

But my game library is an overwhelming mess right now, and I don’t really know where to start, so I’ve been clicking on things based on the titles I should probably be most embarrassed by?

First I tried Barbie & Her Sisters Puppy Rescue, which was NOT as good as it sounds. I played for about 20 minutes before I could figure out how to get off my bike to go find the puppies, then I rescued one puppy and gave it flea treatment, and I feel like in that time I saw about all the game has to offer. Strike one. Next up: Magical Diary: Horse Hall, which was supposedly a Gay American Hogwarts Dating Sim, but everybody was terrible and I played it through two entire times without managing to ever romance anybody. The magic bits were interesting but there were only a couple of them. Strike two.

This left me with nowhere else to turn. It was time to finally try the most embarrassing game in my library: Nurse Love Addiction.

Nurse Love Addiction, according to the blurb on the store page that I didn’t read until after I bought the game, is a visual novel about going to nursing school and discovering “love, medicine and adulthood.” I will tell you that this description does not properly prepare a person for what they will experience in this game. This is like the video game version of the completely-disappeared-off-the-internet Faberry fanfiction Wool Blankets, which was possibly the best fanfiction ever written by the way so if you have a copy please send it to me. 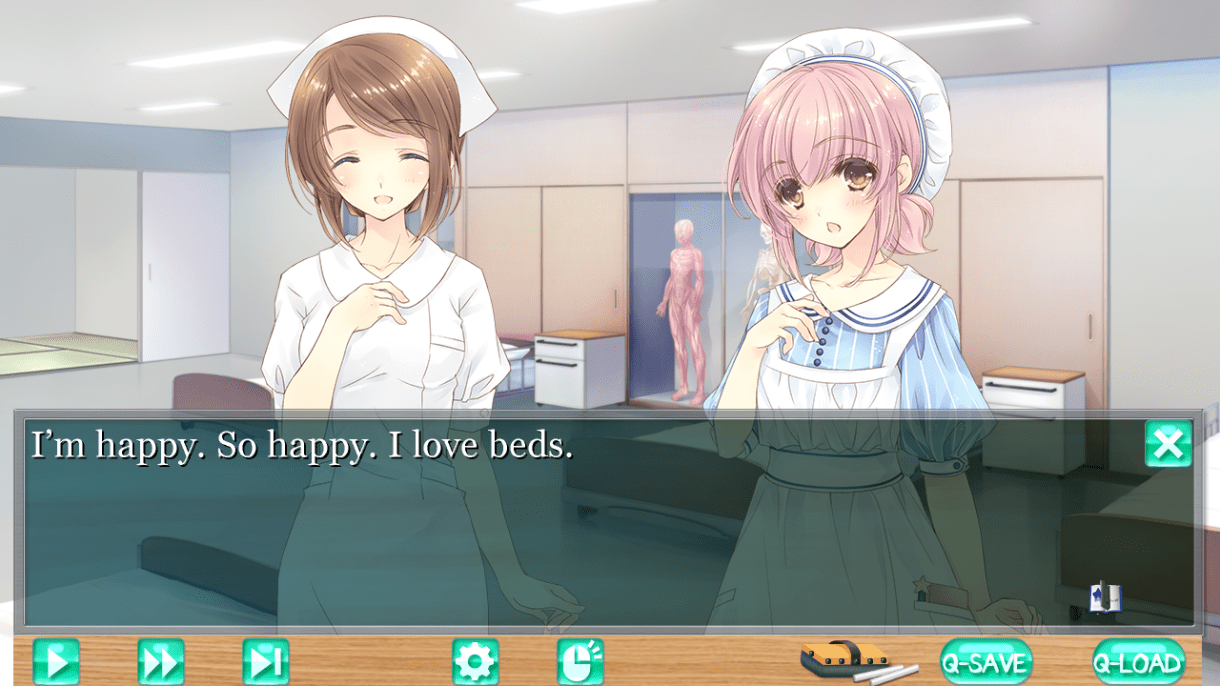 But at the beginning, things go pretty much as expected. In the grand style of most dating SIMs before it, you begin the game waking up for your first day at a new school. You are Asuka, an aimless but good-hearted airhead who has decided to go to nursing school because she found a scribble written in one of her childhood picture books that literally just said “I am going to be a nurse.” You share a dorm room with your sister, Nao, who has followed you to nursing school because she correctly believes you to be incapable of taking care of yourself. I immediately distrusted her because her name reminds me of Nanao, who is arguably the villain of arguably the worst game ever made (Robot Alchemic Drive). My instincts were CORRECT, by the way.

At school, you immediately learn two important facts: 1) that nursing school is actually kind of hard, and 2) that you have four love interests. There’s Kaede Ohara, your teacher, who is kind of boring and not really connected to the rest of the plot as far as I can tell. She appears to be not a criminal, but she does have a secret that I never found out because I didn’t pursue her romance path. Sakuya is a rich mean girl, and Itsuki is a flirty mean girl, and they are “lovers,” but evidently not for long. Itsuke also casually mentions having attempted to sexually assault Sakuya in the past and doesn’t really seem to respect consent and personal space in general. Not great! And then there’s Nao. 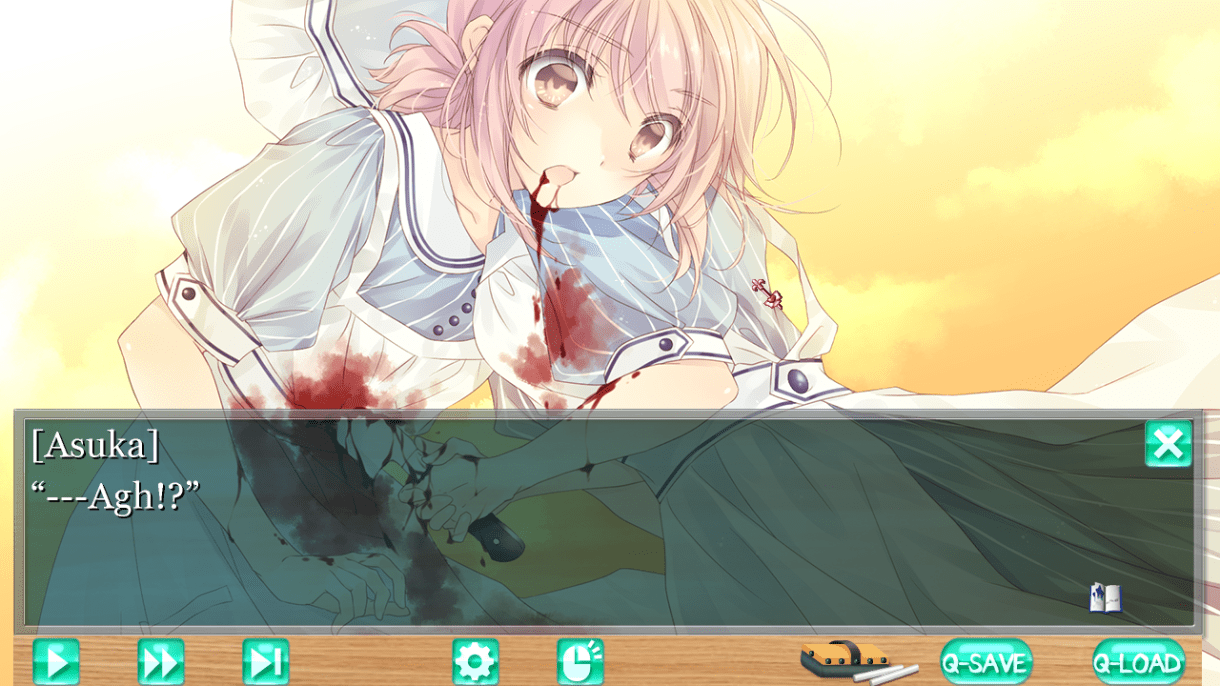 Yup. And, like, I don’t know man. It doesn’t spoil much to say that it eventually turns out that you’re not biological siblings, but, like, naw. I would have really liked it if there were a NO INCEST button you could click at the beginning and just not have to play those parts? Because this game is like 95% visual novel, with only a few choices along the way, and even if you click NO THANK YOU every time Nao is aggressively inappropriate, your character is still kind of into it, and like, I just want to discover medicine and love and adulthood; I didn’t sign up for this.

ANYWAY. The first roughly two-thirds of the game is the same no matter what route you go down, with some minor changes depending on certain actions, but basically you learn basic nurse stuff (making beds! giving baths!) and get to know your classmates. And also there’s peeing, and not peeing. And talking about peeing, and being scolded for peeing. The middle of this game is kind of a lot about pee to be honest. And again, there are no choices really. So at one point Asuka heroically decides to pee her pants in the middle of the hallway at her first day working in an actual hospital, and then the next 20 minutes of the game is spent being reprimanded by multiple people and having it explained to you why it’s not a good idea to pee in the hallway of your job? And I’m just like, don’t look at me! I know this stuff! I didn’t tell her to do it, I was yelling at my computer because I could not stop her from doing it! 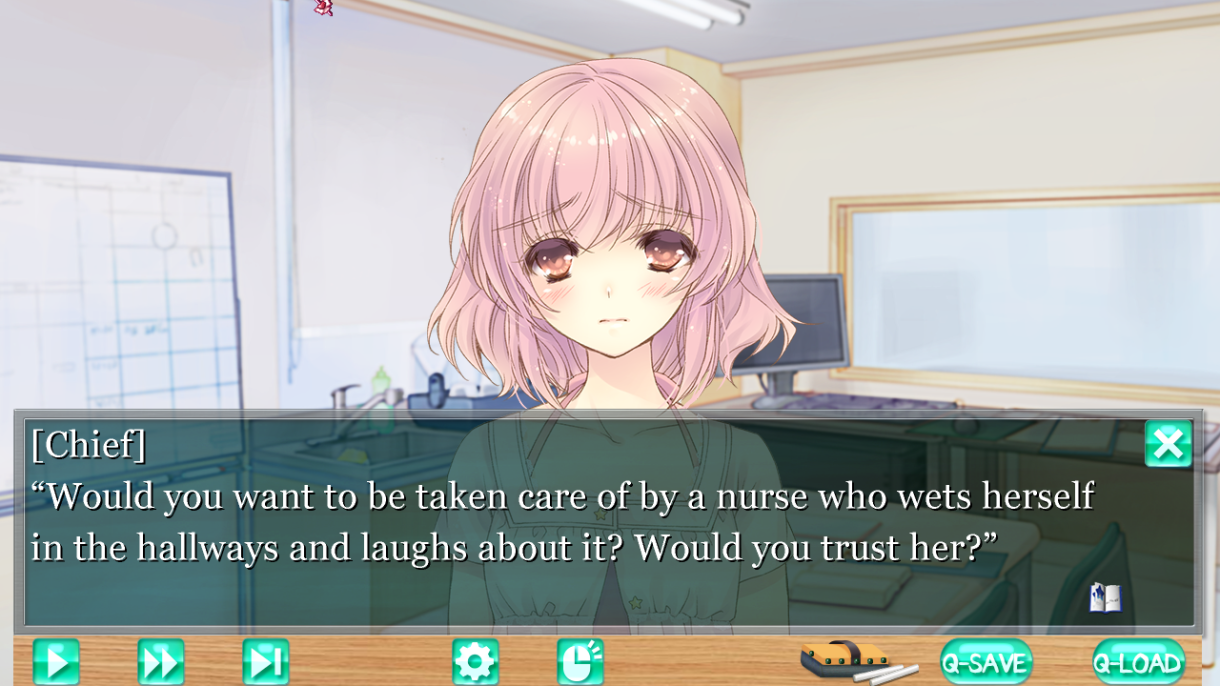 Is this a trick question?

And I really was yelling at the screen. Because somehow, this incest pee game got me engaged as hell? I’m really rooting for Asuka to become a nurse! And she’s developing friendships that are actually compelling. And I spend as little time with Nao as possible. Things are going good and we’re gonna mess it all up somewhat literally by peeing on the floor?

The pee stuff was never actually a sex thing, but it was kind of like how in highschool I used to bring up Angelina Jolie in every conversation no matter what it was about until my friends were like, “Okay dude. We get it.” 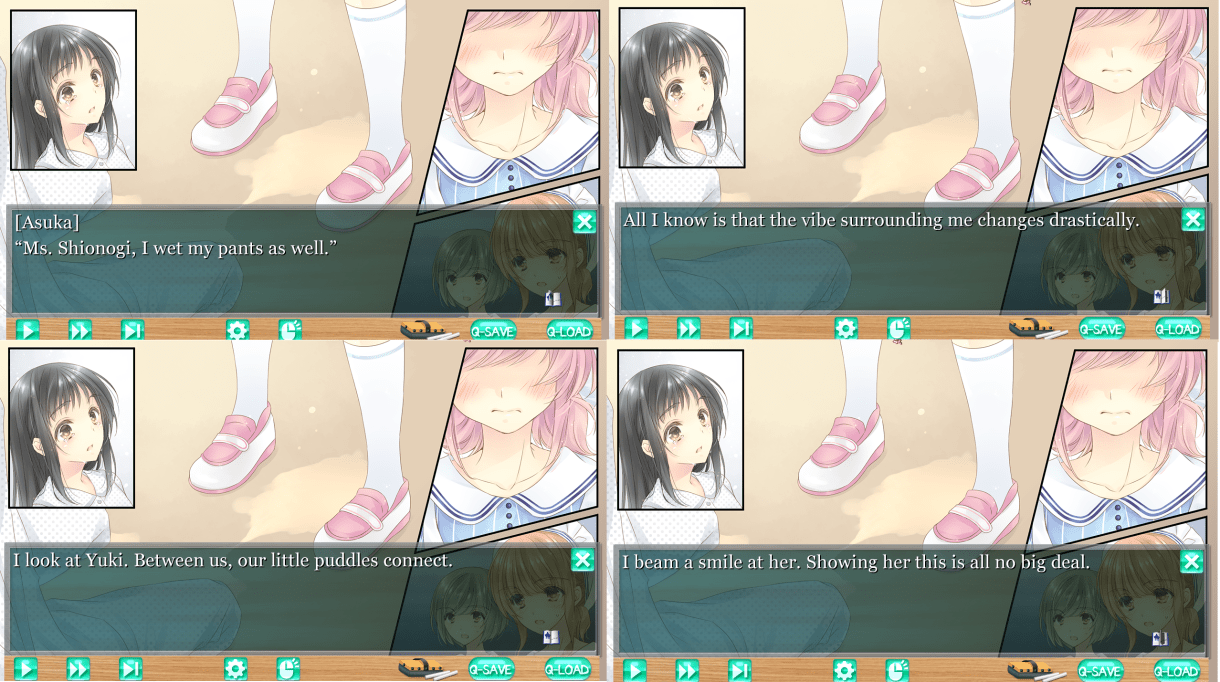 But the writing is weird and legitimately funny. And even though the voice acting is entirely in Japanese, which I do not speak or understand at all, some of the line readings had me cracking up. The story drags on a little, but mostly that was because I really wanted to know how it was all going to end. And now that I’m writing this, I’m realizing that the middle of the game might have been kind of boring without the pee stuff? Maybe it’s the golden thread that ties the whole thing together. Or maybe I’m just desensitized in retrospect.

Because the peeing and the incest part of the game is downright mundane in comparison to what comes next. Things take A TURN. Actually they take a few turns that turn out to be fake turns, but then they do in fact turn. There are mysteries, superpowers, violence, cosplay, and potentially even some romantic cannibalism if you make the wrong (right?) choices. 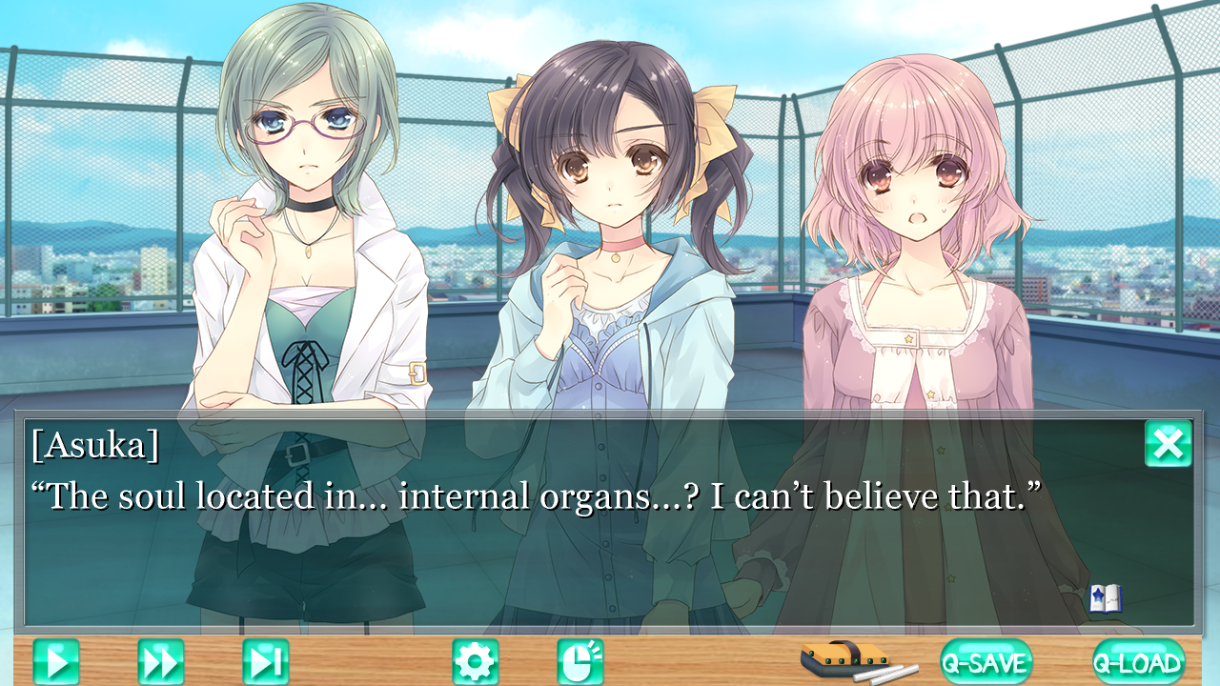 I wound up getting a “good” ending, which involved me marrying my beloved’s evil twin after her body rejected a kidney transplant from her sister that had contained her sister’s soul. And eventually we have a daughter that turns out to be the sister I was in love with who previously lived in the internal organs but now she’s reincarnated and five years old and aggressively hits on me, the me who is her mother. It’s terrible! How is this a “good ending”? There were so many points in the game where I found myself saying out loud, “I never asked for this!”

This game costs $40. That is way too much money, I don’t recommend spending that. I got it on sale for I think $27.99, and that’s still probably too much money, to be honest. I think the price is so high because the game is relatively long for this genre (about ten hours to complete it once, which includes a lot of skipping dialogue at times when I was feeling antsy), and it’s fully voice-acted, which is kind of wild given how much dialogue there is. If it ever goes on sale for like $15-$20 I’d say that’s worth paying, if for some reason you want to subject yourself to this nightmare. 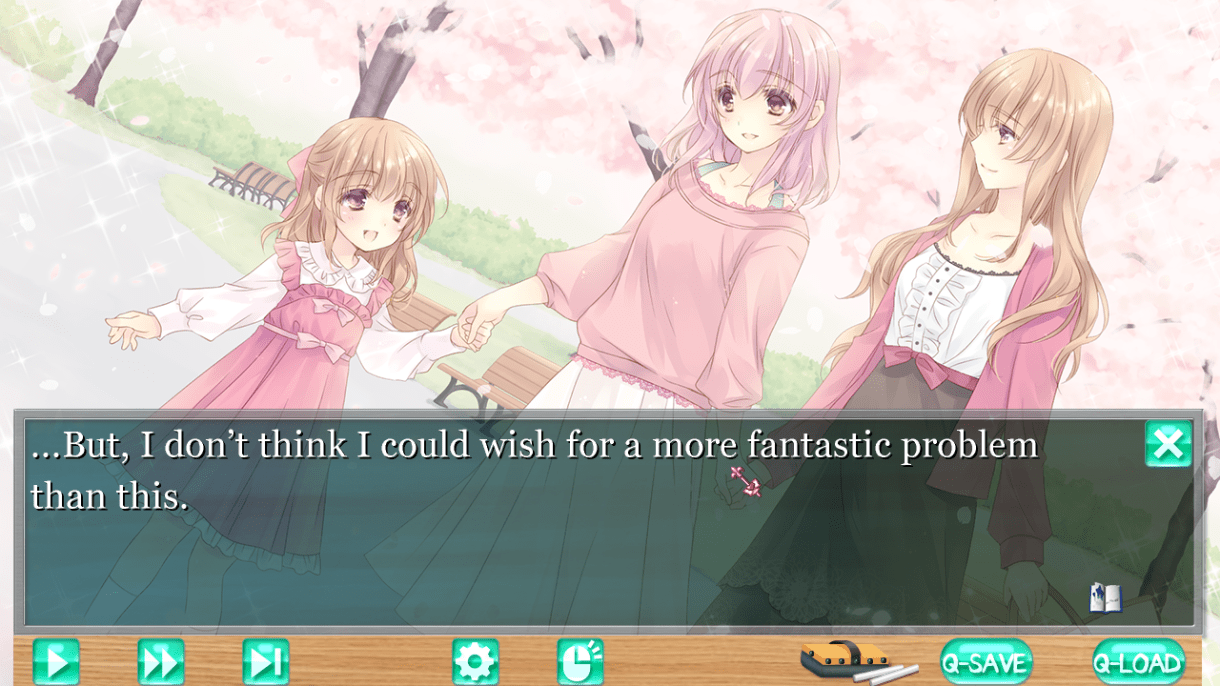 Your problems are not my problems.

But the weird truth of the matter is that for all of the ways I regretted playing it a lot of the time, I genuinely liked this game. There was so much plot. I really thought it was going to just be trashy and scandalous, and it WAS, but in VERY unexpected (if not always welcome) ways. Honestly it was kind of chaste. There were zero boobs, unless I missed some, which isn’t something that normally happens to me. It was an experience for sure, that I am unlikely to ever repeat but will look back on with a fond(ish) feeling of “Well. That happened.”