Happy Hunger Games Olympics! Have you braced yourself for the next lurching round of naive/misguided vs. brave/wonderful athlete comments on LGBT people and Russia? It’s going to be gruesome, I can already tell. So today we pause, momentarily, for a half-step sideways into the intersection of two other awesome international spectacles intermittently fraught with weird political controversy: science and the gayest Olympic sport since the International Olympic Committee dropped wrestling.

Yes, today we’re talking about the physics of figure skating. 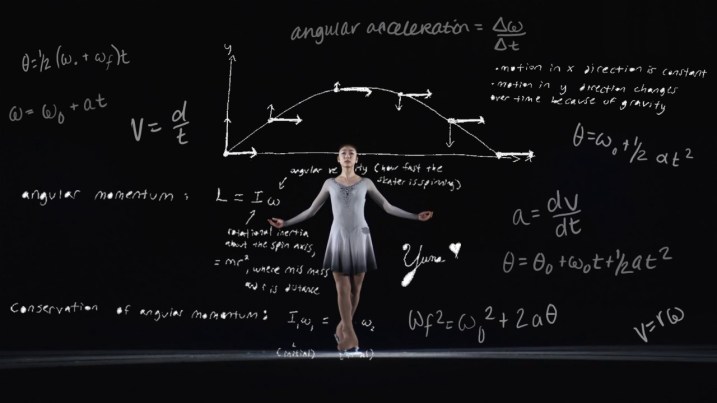 Helping us out today will be my favorite lady skater of 2014, Yuna Kim. Going into the Sochi Games she will be defending her 2010 Olympic gold. Among numerous other titles, Kim is the reigning two-time World Champion, a three-time Grand Prix Final champion and a six-time South Korean national champion.

So lace up, and let’s talk some science!

FYI, it’s also okay if you just want to look at these gifs and follow the links for videos of Yuna Kim. Did you know she’s also a singer?! Gif via Daum Blog.

Let’s start at the very beginning: ice. Frozen water. A material that’s perfect for skating on because it has such little friction — scientifically, the force that occurs when two objects slide against each other and dissipate their energy of motion.

Ice skates are designed to take advantage of this with their grooved blades that are only one-eighth of an inch thick. Because of the minimal contact with an already low friction surface, skaters find little resistance as they slide against the ice and can glide smoothly.

Yuna experiments with friction. This was from the 2009 Festa On Ice, where Yuna performed in a group routine to “Dancing Queen” and “It’s Raining Men” with Johnny Weir.

Skilled figure skaters propel themselves across the ice in controlled motions by taking advantage of Newton’s third law of motion: for every action, there is an equal and opposite reaction.

Michelle Kwan and Yuna Kim hold hands going into a T-stop at the 2010 All That Skate LA.

At the start of the movement when Yuna angles her right foot outwards and extends her knee behind her, the broad edge of her blade hits the ice creating friction. When she pushes to make the edge exert a force, the friction propels her forward. In other words, when Yuna pushes against the ice, the ice pushes back. This is how she and Michelle are able to perform their T-stops at the end — by using friction to push in the opposite direction of their motion.

The same action-reaction principle also comes into play during jumps: when a skater forcefully pushes down, the ice forcefully pushes up, launching the skater into the air to perform whatever feat their heart desires.

Closeup of Yuna’s skates during a triple lutz – triple toe loop combination. I like when the jumps are slightly imperfect because it reminds you how absurdly difficult they are. Gif via Kodemari Sakuraweb.

When figure skaters jump, their entire bodies become projectiles (objects upon which the only significant outside force acting is gravity) moving both vertically (up in the air and back down again) and horizontally (across the ice). The key concept here is Newton’s third law, inertia: a body in motion tends to stay in motion. Because the only force in play mid-jump is gravity, the motion path is that of a parabola (an inverted, stretched out “u” arc).

Ignore the spinning for a minute and check out the path Yuna’s body follows:

Moving across the ice, Yuna’s horizontal velocity (speed in a particular direction) stays more or less constant throughout the move. Compare this to her vertical motion (Yuna goes up a certain height, stops, and reverses as gravity pulls her back down) and you can see that the forces are independent of each other (meaning that changes in one are not necessarily mirrored in the other).

Here’s another jump with some freeze frames:

Now let’s take a look at the rotation — which, scientifically, is measured via angular momentum (the amount that a body is rotating about a point).

Observe Yuna’s arms throughout the jump:

Triple salchow at Summer 2012 All That Skate.

Just as she did in the previous jumps, Yuna starts her salchow with her arms reaching out like she’s getting ready for a giant bear hug. As the jump begins, Yuna swings her outside arm around in front of her body. As she goes up, she pulls both arms in close to her body and does a few quick turns in the air; then at the end of the jump, she extends them out to either side again.

Aside from looking elegant, these arm movements actually serve the purpose of speeding up and slowing down Yuna’s rotation via the principle of conservation of angular momentum.

You can see the same principle in action with her free leg, particularly in jumps assisted by the toe pick, such as the flip and the lutz. Pulling it in helps her to rotate faster.

Similarly for spins performed on the ice, Yuna’s speed increases as she pulls her limbs inwards, making her body more compact. She slows herself down by doing the opposite, unfurling her limbs.

Watch her change her speed:

Zagreb again. This full routine, set to “Send in the Clowns,” is what she’s expected to perform at the Olympics. Gif via Wikitree.

And here’s Yuna doing another spin, because why not:

Yuna in a layback spin at the 2009 Ice All Stars group closing number. No speed changes to be seen here, but isn’t it beautiful? Gif via Happy Skater YunA Kim.

Enjoy the Olympics, everyone!