Orange Is The New Black Season 2 has been out for almost two months now, and there’s something I’ve been dying to talk about. Is now a good time? I know we’re still far from the end on Autostraddle’s incredible recaps, but I just can’t wait anymore. If you haven’t made it to episode 13 yet, just skip the next paragraph.

Okay! So in the final episode, there’s this great scene where [Spoiler] Norma is shown furtively collecting apple seeds in the kitchen in a plot to poison another inmate. When kitchen boss Gloria notices, she quickly puts a stop to it. “You know how many seeds you’re gonna need to make a lethal dose of arsenic?” Gloria smugly condescends. “More than all the apples ever given to any teacher that you’ve ever known. And then you’re gonna need a blender, you’re gonna need lye, and you’re gonna need an airtight container. And then you’ve gotta get it down Vee’s fucking throat. Ay, Mama, you didn’t think this one through.” Norma bows to Gloria’s wisdom, and together the two hatch a new plan of attack. [End spoiler]

While it’s certainly true that one would face numerous logistical difficulties in carrying out murder via poison inside a prison, the rest of the advice in this segment is, um, hit or miss. Apple seeds do not, in fact, contain arsenic — and there’s nothing you can do to them with only a blender, lye, and an airtight container to create it. But apple seeds do contain a powerful poison with a long and lethal history of its own: cyanide.

Actually, apple seeds contain amygdalin, a cyanogenic glycoside which is basically poison just waiting to happen. When the apple seed cells are damaged by chewing, the cyanogens are mixed with a plant enzyme that breaks them apart and releases hydrogen cyanide. While accidentally swallowing a few seeds probably won’t kill you (the hard shells allow the seeds to pass through your digestive system without breaking down), purposeful poisoning is definitely possible. And the means are all around us.

Cyanide is abundant throughout nature and is actually believed to be one of the main progenitors of life on Earth. Back when our planet was one big mess of primordial soup, HCN is thought to have combined with water and ammonia to produce adenine, one of the bases needed to construct DNA. HCN also likely acted as a condensing agent to turn amino acids into long chains of polypeptides, important building blocks for complex proteins.

Today, there are at least 2650 species of plants that produce cyanoglycosides. Apricot, peach, and plum pits all contain more amygdalin than apple seeds; bitter almonds and quince contain less. Cyanide is found oozing in the secretions of centipedes, floating in ponds of blue-green algae, and wafting through the air in puffs of cigarette smoke. It’s everywhere! 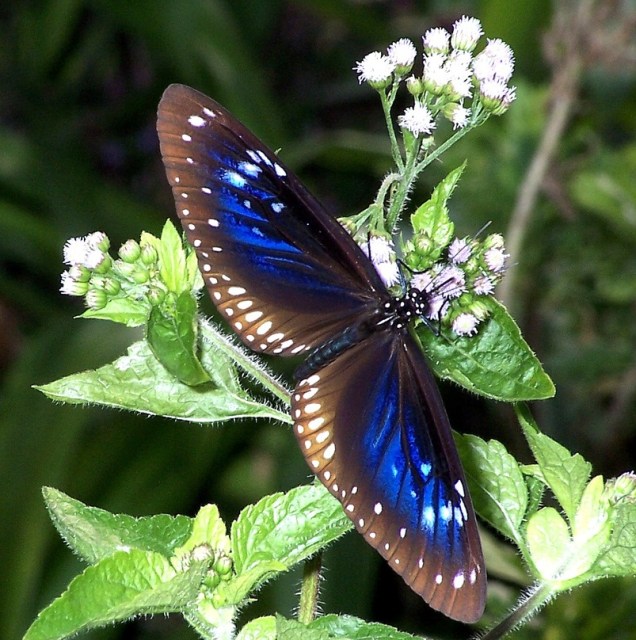 Cyclosia midama, a mimic moth, which stores HCN in its body and can excrete it in defensive droplets. Via The Butterfly Diaries.

But just because cyanide is naturally occurring doesn’t make it any less lethal. Victims of cyanide poisoning meet a quick and gruesome end, ultimately dying of asphyxiation. In The Poisoner’s Handbook, Deborah Blum explains,

Cyanide’s action is murderously precise. It attaches with stunning speed to protein molecules in the blood — called hemoglobin — that carry oxygen throughout the body. The poison is quicker at forming the attachment than oxygen and it binds more tightly to the hemoglobin. The blood is so tightly bound up with cyanide that the body is starved of oxygen. Cellular respiration suffers an instant “paralysis,” as [toxicologist Alexander Gettler] once put it, and the body begins to die. Enzyme production is stymied, electrical signals falter, and as muscle cells and nerve cells explosively fail, body-rattling convulsions frequently result.

After death, bodies poisoned by cyanide often appear to have mottled blue appearance due to oxygen deprivation. Other telltale signs include extremely dark red blood, engorged veins leading from the lungs to the heart, a faint scent of almonds, and, of course, elevated levels of cyanide in the body. 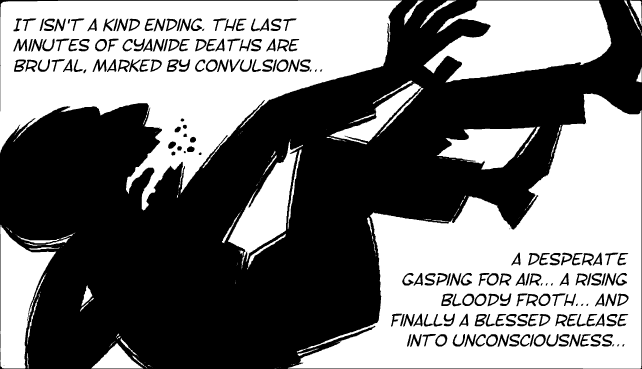 Via Tales from the Poisoner’s Handbook cyanide story, PBS.

In spite of this, cyanide’s use as a poison throughout history has been prolific. In ancient times, Egyptians were believed to have carried out judicial executions known as the “penalty of the peach” by distilling cyanide from peach pits and leaves. During the Roman empire, “the cherry death” served a similar function. Centuries later, when Prussian blue paint was mixed and heated with an acid solution, industrial hydrocyanic acid (from the Greek words “hydro” for water and “kyanos” for blue) and gas was born. HCN gas was employed in the trenches during World War I, and in Nazi gas chambers circulating “Zyklon B” during WWII. In the 1970s, cyanide laced with purple Kool-Aid killed hundreds in the mass suicide known as the Jonestown Massacre. And today, three states in the US still authorize the use of HCN to carry out death penalty executions by lethal gas, in spite of court rulings that have found the practice inhumane, cruel and unusual.

Fortunately, cyanide poisonings are relatively infrequent today. Cyanide, like many other toxic chemicals, has been diligently removed from household product chemical formulations, and industrial cyanide is closely tracked and difficult for the general public to obtain. While it is possible to extract or create cyanide from natural sources, surreptitiously slipping it in someone’s food without detection is highly difficult. Cyanide has a strong, bitter flavor, and the benzaldehyde that cyanogens produce has a distinctive odor, like almond extract. 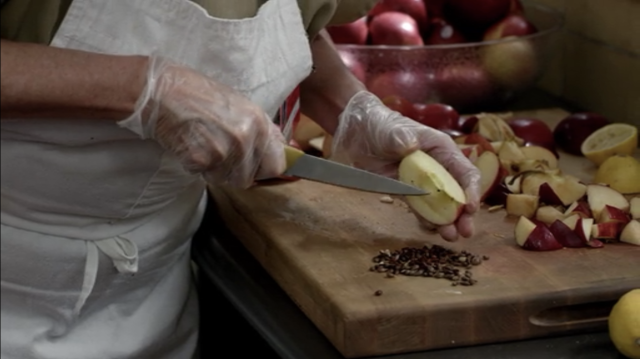 That pile of seeds is probably not enough to kill the target, but it’s getting there.

So back to the poison plot. While the exact dosage required to kill someone depends on their individual body composition, it would probably take the seeds of somewhere between 18 apples and a bushel. Even if the potential victim is on a diet of prison food, they’re probably going to notice that something is up before they ingest enough poison to do permanent damage. And if they do survive, that horrible feeling of suffocation and organs shutting down isn’t something they’re likely to forgive or forget.

As Gloria advised in Orange Is The New Black, “There are other ways.”* A wise person would do best to seek them out before resorting to cyanide poisoning.

*Like, talking to people. Or reporting them to the guards or other authorities. Don’t poison people!