Along with discrimination, violence, homelessness, social stigma, mental illness, poverty, and many more, one of the most pressing issues for the queer community is the lack of research on us — because that’s one of the only things that can prove the former problems exist, and maybe help us call for a solution to them. This week, a really significant and fascinating new study changed not only the information we have about queer people, but it may change what we know about research on queer people as a whole.

In a study published by the National Bureau of Economic Research, researchers found a new way of gathering information from participants that’s even more anonymous than previous anonymous survey techniques have been — as the Pew Research Center says, this technique “makes it virtually impossible to connect individual respondents with their answers to sensitive questions.” (The PRC explains in greater detail exactly how this works.) When the participants in the survey felt more assured that their answers couldn’t be associated with them, they answered in significantly different ways when faced with questions that dealt with LGBT identity. Specifically, participants were more likely to indicate that they were not heterosexual with this research method than with any other — and participants were also more likely to disclose anti-gay sentiments. 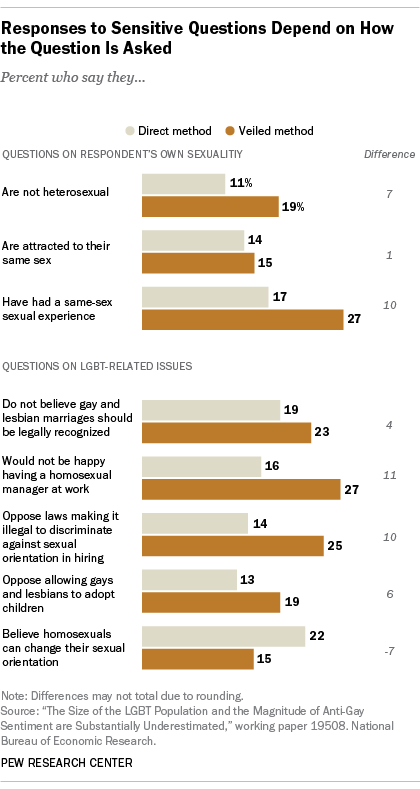 via the Pew Research Center

It’s important to note that although most of the public discussion about this study has centered around the fact that there may be more LGBT people in America than previously thought, that isn’t the main takeaway of this study — or at least, not one that the researchers themselves are willing to confirm. Because the 2500 participants of the study weren’t gathered in such a way as to constitute a random sample of the adult population (they were found through Amazon’s Mechanical Turk program), “the researchers do not attempt to estimate the actual size of the country’s gay and lesbian population.”  Basically, although 10% more people said they had had a same-sex sexual experience than they did when they weren’t as anonymous, that doesn’t mean we can assume that 10% more of the population has had same-sex experiences as we had previously thought.

We especially shouldn’t draw broad conclusions because frankly, this data doesn’t support them. In research about the queer community, misunderstandings about terminology and identity mean that there’s a lot of tendency towards inaccuracy, and we need to be careful about how data is interpreted. There are already plenty of difficulties and confusions in reporting statistics about queer people, like the fact that according to the 2011 Bisexual Invisibility report, data about bisexuals is often lumped under data for gays and lesbians, making the conclusions about both less accurate. For instance, there was a much greater uptick in the number of people who said they were attracted to the same sex than people who said they weren’t heterosexual. What does that mean? Are there people reporting that they’re not heterosexual but aren’t attracted to the same sex as them? We don’t really know, which is why we should be careful about making sweeping statements about the queer population based on these numbers.

The conclusion we can draw is that there’s still significant enough social stigma around the idea of reporting same-sex attraction that some people are avoiding disclosing it out of fear or shame — even in situations where repercussions are highly unlikely, like a research study. This does mean that, while we can’t guess at a number, it’s probably higher than we thought it was. What’s potentially even more interesting is that there appears to also be at least some stigma or shame associated with being anti-gay, so much so that people were significantly more likely to disclose that they oppose equality in the workplace or would be upset with having a gay boss. Although it’s been clear for some time now that the social cachet in supporting gay rights is increasing and is decreasing when it comes to denying them, this is some hard evidence that illustrates how it’s playing out. The most puzzling part of the survey results is the fact that people are less likely, not more, to say that they believe sexual orientation is changeable when they’re extra-anonymous. This bucks the across-the-board anti-LGBT statements in the rest of the results, and according to the researchers, “indicates that participants saw it more socially desirable to report that sexual orientation is changeable, which goes in the opposite direction of a general ‘pro-LGBT’ norm.”

This study is far from final or comprehensive — if anything, it’s giving us a peek at the tip of the iceberg of how much we don’t know about our own community (and the people who oppose us). The researchers say that the group they worked with actually probably skews younger and more liberal than the average population, such that “some of the groups under-represented in their study are probably more likely to hold anti-gay views or be less willing to say that they are not heterosexual,” meaning that these results might have been even more extreme with a random sampling. (Although, again, we shouldn’t generalize!) We don’t have enough information to take away very much specific insight about our community, but this is a big heads up that layers of social stigma have made the little we thought we knew harder to rely on, and a heads up that we need much more research in this vein.