Bisexuals aged 13-17 experience lower levels of happiness, higher rates of alcohol and drug use, and lower levels of social and family acceptance and support than their straight, gay and lesbian peers, according to a new report from the Human Rights Commission in partnership with BiNet USA, Bisexual Resource Center, and Bisexual Organization Project.

The report, out today, uses data from a 2012 HRC survey of 10,030 LGBTQ youth. In that survey, 3,808 youth identified as bisexual, 354 identified as queer, 671 identified as pansexual, and 109 identified as something else other than specifically gay or lesbian (e.g. heteroflexible) — that’s almost 40% of LGBTQ youth who identify as non-monosexual. The report revealed strong trends that bisexual young people feel less accepted in their identities than their straight, gay and lesbian counterparts. Of bisexual youth, 44% reported having a trusted adult family member to talk to, compared to 54% of gay and lesbian youth. Only 10% of bi youth and 4% of pansexual youth reported feeling like they “definitely fit in” in their communities. Bi youth were less likely than their gay and lesbian peers to know whether there was a Gay Straight Alliance at school or an LGBT service community center in their area. 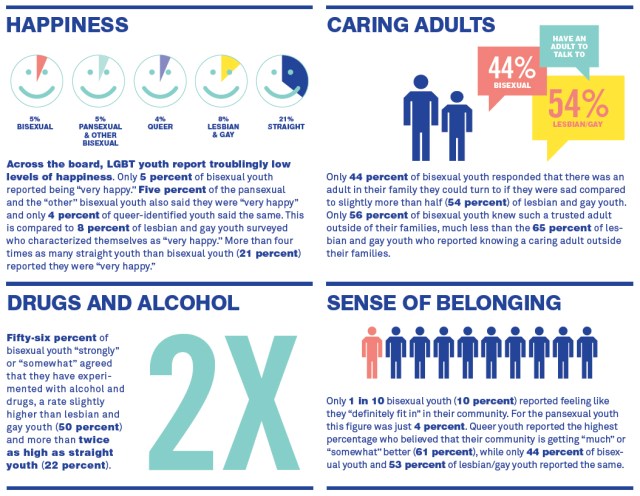 The report — which is beautifully and accessibly presented — should be a wake up call to LGBTQ service providers, advocates, community members and allies who aren’t aware of the challenges bisexual youth face and just how big a proportion they are are of the community, said Ellen Kahn, Director of the HRC’S Children, Youth and Family Project.

“Organizations that serve the LGBTQ community need to be able to think differently about what kinds of services might address some unique needs of the bisexual part of our community,” Kahn said. “If young people are telling us in our survey they don’t feel connected to LGBT centers or don’t know about resources, what do we need to be doing in our outreach materials to reach those people?”

The numbers paint a bleak picture, but it’s important that they exist. Bisexuals are very underrepresented in research related to the LGBTQ community, and we’re often rolled into lesbian and gay numbers and programs despite our very specific challenges and needs. The HRC has received criticism in the past for contributing to the erasure of the bi community, so it makes an impact for them to ally with prominent bisexual organizations to lift up the voices of bi people. Today is Bisexual Visibility Day and part of the first ever Bisexual Awareness Week, and it’s an opportunity to take a hard look at the needs of the bi community and how we can all serve and support it better.

Yesterday, the LGBT Movement Advancement Project released a report highlighting the health, violence, income and other disparities bisexual people experience. The timing of the two reports is impactful, Kahn said.

“We’re seeing some of the outcomes in adulthood that bi people are experiencing, and with this data from young people we have a chance to try to chisel away at some of the stigmatization so that the next generation of bi adults will fare better,” she said. 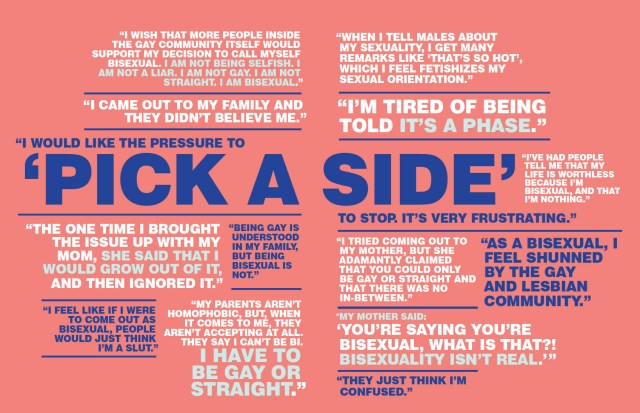 Youth can speak for themselves about their identities and needs. via HRC

Bisexual youth have lower rates of being out as bi to everyone in their lives, according to the report. Kristin Russo, co-founder of Everyone Is Gay, said she originally came out to her parents as bisexual but later came out again as lesbian because she felt her parents weren’t able to understand bisexuality as a valid identity.

“What it did was close the conversation and allowed my mom to only have deep understandings of what it means to be gay and what it means to be straight,” she said. “If I had come out as bisexual we would have had more of a dialogue about sexuality.”

Everyone Is Gay gets a lot of questions from bi young people who struggle with similar fears about whether people will believe that they are something other than gay, lesbian or straight. This data creates a new opportunity to look at the messages youth are receiving about bisexuality from the media and their parents, peers and communities. One simple way to do that? “Especially with young people, we need to ask open ended questions,” Kahn said. “Young people have said to us so many times ‘I don’t want to check a box’ but we keep putting forms in front of them with boxes.”

Resolving the stigmas and social and policy pressures that hurt bisexual youth is more than a numbers game. But with powerful, clear data like this, bi advocates have an important new tool to pursue inclusion, and educators, parents and lgbtq service providers have a new resource to begin to understand that bisexual youth exist and need someone to start listening.