In the midst of a series of gay marriage victories, like Maryland and Washington, New Hampshire has been quietly considering a repeal of its marriage equality law for the past few months. Today, the New Hampshire House will consider what would be the first repeal of a same-sex marriage law by a legislative body in American history. 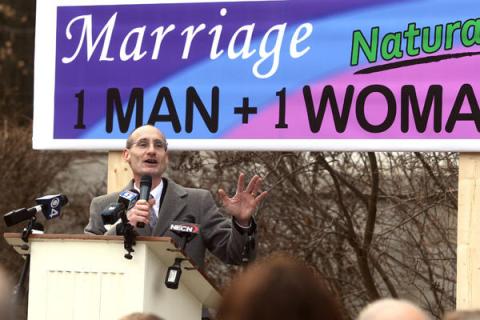 Unlike Prop 8, which was an instance of individual voters deciding to oppose marriage equality and negating the legislature’s decision, the repeal in New Hampshire would be an instance of the state itself deciding to retract a right that it had previously granted. If this bill currently being voted on were to pass, it would repeal the two-year-old gay marriage law in 2013, and would replace it with a civil union structure that was in place in 2008-2009. The New Hampshire House of Representatives is Republican-controlled, as is the Senate, which is where the bill will go next if it’s passed by the House. New Hampshire’s Democratic governor, John Lynch, has promised to veto the bill if it reaches him, but a two-thirds vote of the legislature could potentially override the veto. If the law is repealed, a lawsuit will probably be filed, arguing that the civil union law to be put into place is discriminatory.

New Hampshire is a right-leaning state in a part of the country generally considered a bastion of liberal values. There are fierce opponents of the repeal, and there are also those who are hoping that the fact that both the House and Senate have a Republican majority means that a law they never wanted to exist in the first place will finally disappear. Across the rest of the country, states are slowly progressing towards equality; a few states, like North Carolina, are moving in the direction of a ban, but they’ve never had marriage equality at all. Marriages in New Hampshire would remain intact if this repeal were to pass, but it’s anyone’s guess as to when real marriages could be performed again — maybe not until federal marriage equality becomes a reality. The bill includes a non-binding voter referendum in November, which means we’ll get to gauge the extent to which the public supports a repeal as opposed to the state legislature.

Between the “war on women” and the general systematic failure of the healthcare system, it’s not a stretch to say that working in the best interests of ALL American citizens isn’t necessarily a priority for the current crop of Republican lawmakers. But by the same token, it seems fair to say that there are more important things at stake in the legislature right now than rescinding a basic civil right from a specific marginalized group when it’s been working perfectly well for the last two years. The House’s vote on the repeal bill may come by this afternoon — hopefully the waste of legislative time and resources will be over before it really begins, and the citizens of New Hampshire can continue with their lives as though the government never considered re-classifying their families as separate but equal.