I used to watch “The Wonder Years” as a young girl. When I tried to reminisce about it I didn’t even remember Kevin Arnold’s name. Just what he looked like and the opening credits.

Netflix recently added three shows of interest to its lineup of instant watch-ers: “The Cosby Show,” “That 70’s Show,” and, most importantly, “The Wonder Years.” I found this out eating Ramen noodles on the couch with my dog, and I logged in and finished 2 seasons in my first marathon. It was still full of, well, wonder. Only now watching it is even more poignant and universal, because I remember being twelve and being just like Kevin Arnold. I was home. I was eating Ramen on the couch but really I was in my room, late at night, a 10-year-old watching it until I fell asleep. The glowing screen and those opening credits.

A disclaimer: they have altered the theme song on Netflix. 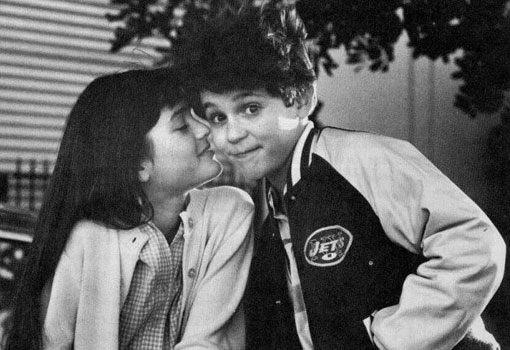 Episodes I Remembered And/Or Wish I Had Remembered:

+ Season 1, Episode 5: “The Phone Call” – Kevin tries to call a girl in his class and has fantastic delusions about what might happen. For anyone who drafts and redrafts text messages a minimum of five times.
+ Season 2, Episode 8: “Hiroshima, Mon Frere” – Kevin tells Wayne how he really feels about him in that one second and begins to appreciate their relationship more.
+ Season 4, Episode 11: “Heartbreak” – Kevin and Winnie see each other when their schools do a joint field trip to a museum. For anyone who has ever wished it would all fall together at exactly the right time.
+ Season 6, Episode 22: “Independence Day” – Kevin delivers a closing monologue that reminds anyone, ever, in any place, of what it means to come from home.

What are your favorite episodes? Do you even like “The Wonder Years?” Do you wanna watch it with me in bed? I have 48 packages of Ramen. No joke.