Sonya Renee Taylor didn’t mean to become a poet, but once it happened she was unstoppable. She didn’t plan on creating an international body positivity movement, but today her project The Body Is Not An Apology reaches 100,000 people every week.

“There were no giant moments where it was clear that everything would change,” Sonya Renee explained. “There were tiny moments when I chose to do something and it might have been scary and then it changed the trajectory of my life.”

Since then, her work has changed the lives of everyone who has heard her poetry or participated in one of her projects.

She uses poetry to celebrate bodies:

To demand better for women:

For our last National Poetry Month Q&A, we talked about her history, her activism and why poetry matters.

How did you get started performing poetry?

I started doing poetry professionally 10 years ago. It happened very accidentally. I was working at a nonprofit and a spoken word organization did a fundraiser for us. I fell in love and started going to poetry events every single night of the week. I fell into poetry slam shortly after that, maybe a month after my first open mic. I ended up on my first slam team and won the national individual slam team the first year. And then I went home and quit my job and became a poet.

Did you see this all coming, or was it a surprise?

I certainly didn’t see this in the future. It wasn’t on my agenda, which I think is the important thing. Our most amazing life isn’t on our agenda. It finds us, and we just have to be willing to go with it. I’ve always had an activist spirit, I was the 9 year old saying “we can’t use Styrofoam!” I’ve always been that kid, and I’ve always been an artist. Both of them were going to find their way into relationship in whatever I was creating.

How do your art and activism work together and feed into each other?

How did The Body Is Not An Apology get started? What is the goal?

Three years ago, I posted a selfie on Facebook that I had on my phone that I was a little afraid to share. The next morning I encouraged people to post selfies where they felt empowered. About 20 people did that. I started a FB group called “The Body Is Not An Apology” which was already the name of a poem. Today we’re in 42 countries, we have 17 staff, and we reach more than 100,000 people a week with our message of self love and empowerment.

Titles are so important. Where did the name come from?

The title came from a conversation I was having with a friend who was fearful that she was pregnant and it was an unwanted, unplanned pregnancy. My friend is also queer and disabled, she has cerebral palsy, and I asked her why she was having unprotected sex, and she said to me she didn’t feel entitled to ask that person to use a condom because the nature of her disability already made it hard for her to be sexual. My response to her was “Your body is not an apology, it is not something you offer to someone and say I’m sorry for being this way. That’s not acceptable.” That resonated in me and made me think about all the times I had been apologizing for my body and apologizing for the way I show up in the world and apologizing for my queerness and apologizing for my blackness and apologizing for my size and I knew I needed to write a poem.

How did it go from a poem to a Facebook page to an international program with projects, workshops and more?

A few months after I first founded the page, I had a bit of an existential crisis, I felt I was being a hypocrite. Every day I told people to love themselves radically. I’ve had alopecia since I was in 3rd grade, which means I have permanent bald spots, and I’d been wearing wigs and weaves for nearly two decades. I had roommates, lovers, close friends, who had never seen me without my wig on. I decided that I had to do something radical to get over that fear of what it means to be in the world without hair. I started the the RUHCUS project – Radical Unapologetic Healing 4 Us. It’s a 30 day personal and community transformation project to help us move beyond the fear, pain and trauma in our lives. That was one of our first major projects. People all over the world have done RUCHUS projects, and we offer webinars and consultations. 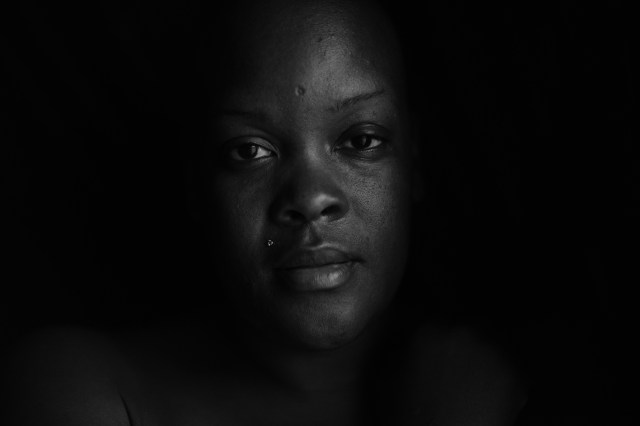 How does your queerness factor into your work?

I identify as a fat black queer activist. I have lots of identifiers, and queer is one of them. The work I do is all about how we make peace with the body, our own and other people’s bodies. I can’t have that conversation without talking about my queerness, or my blackness, or my size, or my mental health, or trans issues, or disability. It’s about everybody’s right to be on this planet.

Why do you think your work as a poet and with The Body Is Not An Apology has made such a huge impact?