Hello and welcome to our first Arts & Entertainment Daily Fix in a long time! We used to write these round-ups every day. Oh, 2009, were we ever so young? Anyhow, lots of things to cover today, so let’s get cracking: 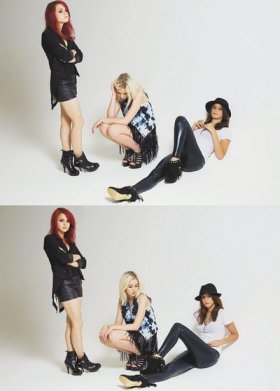 Good news for fans of Skins and fans of lesbian storylines — the much-discussed Series Seven, which will debut in the Springtime of 2013, will feature not only your secret beautiful dangermouse rebel girlfriend Effy and your irreverent-and-oh-so-always-troubled best friend Cassie, but also the not-s0-secret girlfriends known as Naomi and Emily. According to the E4 press release (via AfterEllen):

Skins 7 will see the return of former Skins stars Hannah Murray as Cassie, Jack O’Connell as Cook and Kaya Scodelario as Effy in three individual stories. The three stories will have their very own titles: SKINS PURE (that’s Cassie story), SKINS RISE (Cook’s) and SKINS FIRE (that one is Effy). More news? Go on then… Lily Loveless (Naomi) and Kat Prescott (Emily) will also appear in guest roles. Blimey, that’s a lot of news!

Skins 7 is written by series creators Bryan Elsley and Jamie Brittain alongside Jess Brittain, and we’re told it will go into new territory; more adult, more uncompromising. YES! Each two part story centres on the characters now in their early twenties, the party’s over and they’re starting out as young adults, struggling to find a direction and a focus in unforgiving times.

And here’s the episode description for SKINS FIRE:

Effy (Kaya Scodelario) has a dead end job as a receptionist for a leading London Hedge Fund. But as she stumbles across crucial financial information relating to a troubled deal and embarks on an affair with her wealthy boss, she finds out that she has bitten off more than she can chew. Her flatmate Naomi (Lily Loveless) tries to stop Effy from ruining her life, but Effy cannot be reached; until tragedy strikes.

Alas, also it seems my prayers for a return of Series Five Franky (and amnesia regarding Series Six Franky) have not been heard.

I actually wondered about this in a previous Vp piece: can “lesbian” fashion succeed on the runway? Is there such a thing as—a definable aesthetics of—”lesbian” fashion?
It depends on how lesbian fashion is marketed; if its not marketed as “lesbian” fashion then it’s way more versatile and it will go a lot further in the fashion industry. As gender-bending and women wearing men’s clothes becomes more popular and trendy, lesbian fashion will start to make more of a name for itself on its own and then in turn it will make its on mark on the industry. That’s what Original Tomboy has been about for me, this transformation in the industry to include androgynous dress, which also includes lesbian fashion.

America’s Next Top Model, a bastion of reality television weirdness, will be allowing male contestants for its 20th cycle. Why? Because of the patriarchy, obviously. Here’s a quote from E! Online:

Viewers can expect some juicy drama from the new season as the male and female models will be living together in a house. (Hookups? Yes, please!) Viewers will also have the chance to vote for their favorite models through social media sites.A+

Just speaking for me here  — I preffered the Yes, please! Hookups when it was all girls in the house. Just saying.

The Good Wife‘s Showrunners talked to Vulture about sex, specifically about Kalinda, who is bisexual and crazy-hot:

…for Kalinda, sex is rarely about love and almost never romantic. It’s a tool she’s used to help crack cases, manipulate the enemy, and most recently, let her ex know she won’t be taken advantage of again. “We’ve been playing Kalinda as someone who has changed her tastes over the past few years. [Her husband] doesn’t know who she is now,” Robert says. “She is able to sexually one-up him, and it’s a surprise to him.” But, he also concedes, “The dirty joke is never too far away from what we do.” (Says Geller about the ice-cream scene, “It makes you really rethink dairy, doesn’t it?”)

Kelly Lynch talks to The AV Club about her “random roles,” which include a lesbian role in Three Of Hearts and playing Ivan on The L Word:

Thank you, one of my favorite characters of all time. The way it came to me is that I’d just finished something heavy and dramatic, and I called my agent up and said, “Look, I want to do something romantic. I never get to do that. I’m always, like, the bad, sexy girl, the one who breaks up the marriage, the evil whatever. I want something romantic, sweet, fun, sexy, light.” “Done.” And I literally got a call later in the day. “Look, something just came our way, and it’s really romantic.” I said, “Great!” “You don’t have to audition or anything, they really want you, they think you can do it. We’re not sure, though, so you might not be sure.” “Send me whatever you’ve got!” And I basically get the sides for what the part is, and I’m like, “Ivan…?” And I called, and I’m like, “What is this?” And they’re like, “You’re a drag king.” “A drag king?”

One of my favorite L Word scenes ever:

As you’ve probably heard — Amy Poehler and Tina Fey will be hosting The Golden Globes, which will air on January 13th, 2013.

Entrepreneur and all-around amazing human being Kelli Carpenter is engaged to singer Anne Steele. Carpenter split from ex-wife Rosie O’Donnell a few years back and heads up R Family Vacations, which was featured in the HBO Documentary “All Aboard!”

We’ve stood by Lindsay Lohan faithfully for three years and now, at long last, she has broken our allegiance eternally for saying she’s voting for Mitt Romney. Sigh.