It’s time to introduce you to my last and final monsters. These were the people I had wanted from the very beginning, actually, they were pretty fully realized into their own identities — working with everyone else in the project involved pulling out their narratives a lot more to get what we wanted, but for these three… my muses! It was not so difficult. I don’t mean that the difficulty in the rest was bad, by any means — it was important for the work, to labor the story into something beyond what they were comfortable with. For these three it was more of a challenge to see how much farther we could both go. 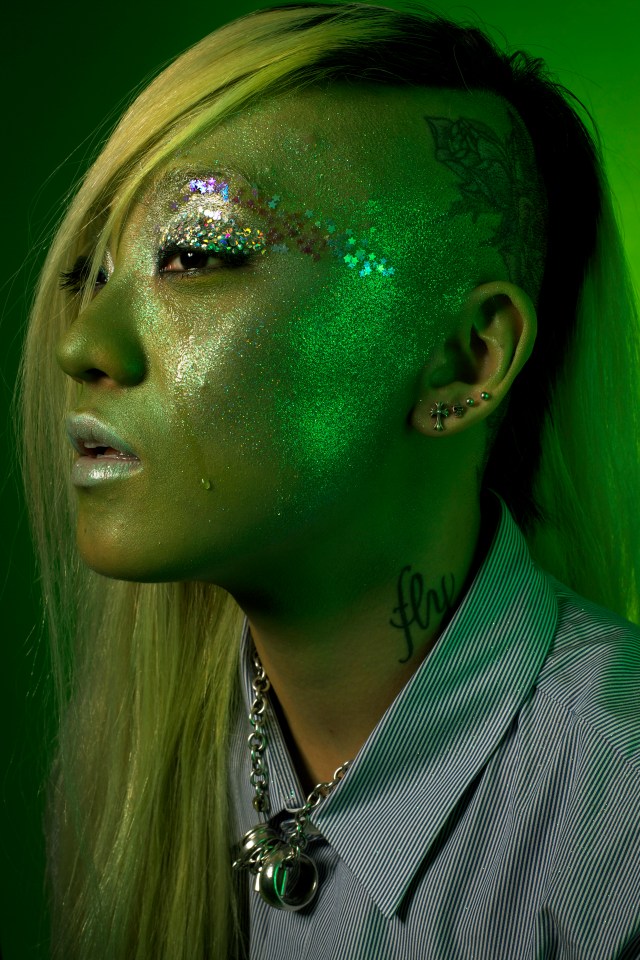 Eri’s one of my favorite people in NYC. I don’t envy a lot of people but I envy Eri. Eri’s the cool girl I wish I was. She works for my religion/favorite brand Comme des Garcons, and is what we call lifer… it’s not just retail, but a way of life. She’s a black crow forever. The Comme aesthetic is monstrosity itself. Actually, Kawakubo’s last fall collection was CALLED monsters. It focused on the blatant disregard of garments as practicality. Eri personifies the Kawakubo woman — “I make clothes for a woman who is not swayed by what her husband thinks.” Eri is one of the blessed people in the world who has pretty much no concern at all for how strange she might be perceived. She lives in a realm of her own making, where people are just as daring as she is, and so the prospect of being anything less than honest about her desires and her identity… it’s alien to her. A monster fulfilled. The nightmare girl made real. I’m pretty much the same way, but I still admire her guts. Her interview was actually more of a discussion about the Comme des Garcons brand and how it so intertwines with how we approach the world and our bodies and other people. How these clothes guard us and force us out of our comfort into some other, wiser shell. Comme des Garcons helped me find words for my dysphorias and made it something I don’t want to die over, but explore in ways that feel safe, and fulfilling to me. Kawakubo gave me freedom in ways I did not know existed. For that I am endlessly grateful, and this gratitude is something Eri and I share. So…  her photo was really just an exploration of ideas we had about color and femininity and the literal idea of monsters. Mermaids, these sea and swamp sirens of brutal allure and femininity. Swamp girl green with glitter and tears. You can’t tell if she’s crying because she’s happy or lonely. Sometimes you can be both. 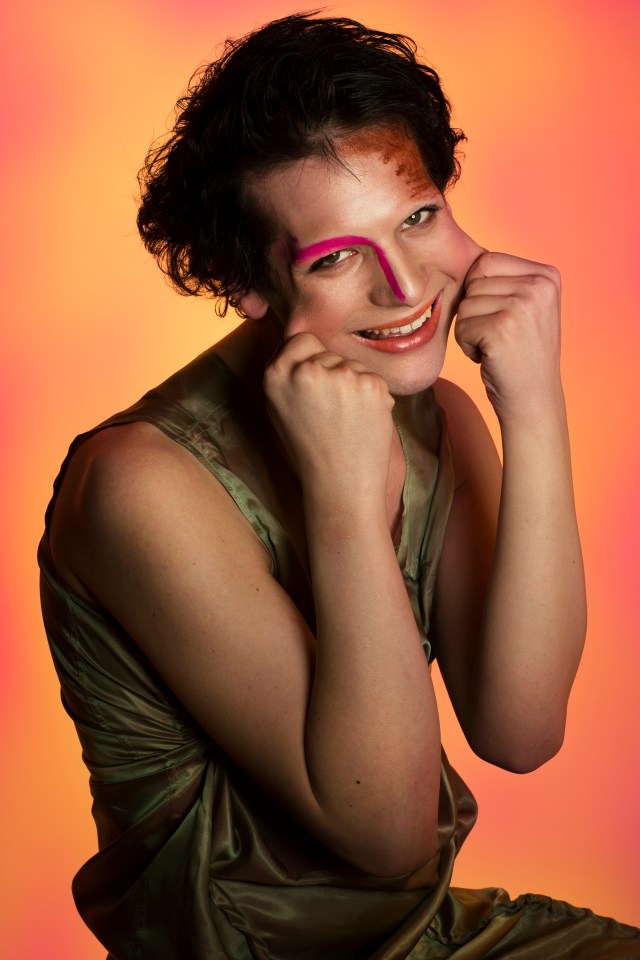 My sister in arms and silk blend dresses! I’m so glad she’s doing so well for herself. Hari came in to the shoot looking like a Goddess; I felt guilty for trying to corrupt her a little bit for the story. I made her instead into a smiling, gleeful monster, since we don’t have many much of those in the story. Hari’s most important ugly is perhaps her real… desperation for love and admiration. All these gay boys wanting her now that she’s not a gay boy, all these straight boys being seduced and loving it. This potency, it’s something Hari harnesses, and acknowledges as this deep burning thing. She puts it on the line in her sex columns for ADULT. But I don’t think that desperation is bad or damaging. I think it’s just very honest. Hari doesn’t want to be a monster — she just wants to be a girl. Starting from being a gay Jewish boy and self actualizing so quickly and majestically over the course of a few years has been really beautiful to watch. Hari’s Most Important Ugly is something she deals with all the time, quite constantly, and elegantly, I think. She doesn’t get through dark times without smiling in a self-possessed way, which makes her unstoppable. She hungers for what she wants in a way people can be very terrified of. They should be. She’s going to rule the world one day, and I applaud her for it. So we made her monster into a smiling, sardonic thing of girlishness and manipulation, using products from her own makeup kit and mine in perfect harmony. Makeup as a mask of femininity (and/as) performance, sure. But all these identity characteristics are up for debate as to how inherent they really are — you possess and manipulate them, pull them off, pull them on. Like we did in the photo, or we tried — tongue in the cheek gender humor. Ha ha ha. 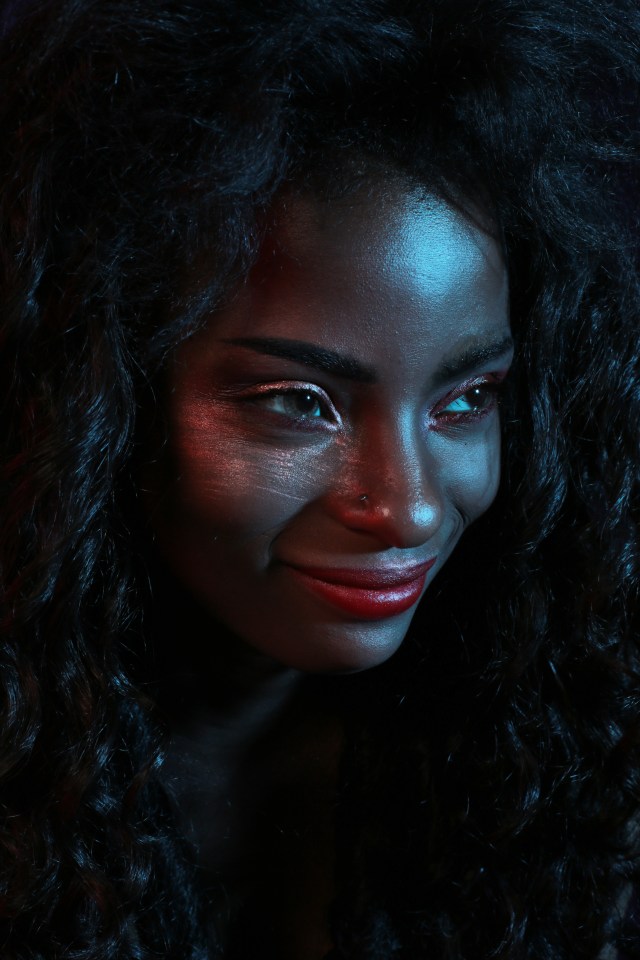 Indigo has been my muse since I first saw her — my lady vengeance girl! We knew she’d be the main muse for Most Important Ugly because she understands the premise from back to front. Indigo uses makeup as it pleases her, not how it pleases others. I think that was the end goal of the project — to internalize your desires and willpower so much that the thought of doing otherwise is just bizarre. Her most important ugly is a secret between the three of us, I think, but I like her portrait so much she had to be the queen of the project. The devil girl, the wicked smile and flash of gold in cold lighting. Her portrait actually made Tayler and I scream and fall on the floor with joy when we saw it — nothing had come out so perfect and definite before. It was instantly the headliner for the show. Cold and wicked and overjoyed, the archetype of our favorite villains and anti-heroes, the qualities of so many wonderful ignored girls in culture who were taught they were not enough for too many reasons. All of them through Indigo’s eyes. Where some of the monsters we pulled out of lipgloss goo and covered them in false eyelashes and foil and frost, with Indigo we did very little, and it was more than enough.

And so it goes. The end! Damn, has this post been a long time coming. I thought I would be filled with more nostalgia, but I’m honestly quite relieved to be done with something I loved and thought about for so long. The timing couldn’t have been better, either — NYFW starts in a few days, which also happens to mark around the anniversary of terrible things ending, as well as the first September I won’t be in school. So many changes. I feel good about it. It feels good to have things gone, and to recalibrate and resettle. I’ve been working on so many other ideas, I feel like I woke up in a whole new meat-suit of a body. I am going to take you on a trip you never imagined… all over again. See you soon.