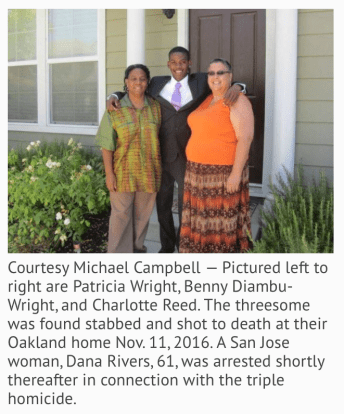 Patricia Wright worked in the Berkeley Unified School District for nine years, first as a sign language interpreter, then as a special ed teacher, and then as an elementary school teacher at Berkeley Arts Magnet. She retired from BUSD in 2015, and began working as a part-time computer prep teacher at Esperanza Elementary School in Oakland.

“She was a true educator and so excited to work in her community,” her principal told The East Bay Times. “It really was a match made in heaven. She wanted to be part-time, and that’s what we needed. I offered her a job on the spot.”

Patricia’s partner, Charlotte Kuulei Reed, a U.S. Air Force Veteran, owned a hair salon in San Jose. On Facebook, an employee describes her as “truly one of a kind” and notes that Reed “beleived in [her] when no one else did and gave me a second chance. I will FOREVER be grateful for the lessons she taught me.”

Reed and Wright were married over a year ago and had two other children, Rachael and Khari.

Earlier this year, their adopted son, identified in court documents as Toto M. Diambu but going by the name Benny Diambu-Wright, graduated from Berkeley High. He was studying at Laney College and working at Wal-Mart. He had been adopted from West Africa by Patiricia Wright at the age of eight.

Diambu-Wright was mourned on Monday in a vigil at Berkeley High, where friends spoke lovingly of the 19-year-old, whose “unwavering smile [was] able to light up a room.” A classmate read an excerpt from an essay he wrote about his “ideal world,” which included: “my world is not going to have all the weapons and bad drugs that can kill you.”

Tragically, Diambu-Wright, along with his 57-year-old mother and her 56-year-old partner, were found dead on the property of their Elmhurst home last Friday after suffering fatal gunshot and stabbing wounds. There was also a fire in the garage that the Oakland Fire Department extinguished within half an hour. Police had responded to reports of gunshots heard on the block a little after midnight, and immediately found Diambu outside, bleeding to death. After hearing a loud noise from the garage, a bloody 61-year-old Dana Rivers emerged from the house with knives and ammunition in her pockets. She then “began to make spontaneous statements about her involvement in the murders” and attempted to flee on her motorcycle.

Today, Rivers was charged with three counts of murder with special circumstances, arson, and possession of metal knuckles. She may be sentenced to life in prison without the possibility of parole and could also be eligible for the death penalty, depending on the judgment of the Alameda County District Attorney’s Office.

In a tragic twist, Dana Rivers was actually a very well-known transgender activist. She was in the Navy, was married three times, and worked for a decade as a Democratic political consultant in Orange County before she moved to Northern California, got a teaching certificate, and began teaching in 1991. In 1999, the suburban Sacramento high school where she worked suspended her after she disclosed her trans status as well as her intention to undergo gender affirmation surgery. Rivers, a beloved educator who’d won a teaching award from the school in 1993, resigned after the school board voted in favor of asking her to leave. She later accepted a $150,000 settlement from the district and, according to a 2004 profile, also a $10,000 grant from the Colin Higgins Foundation for “courage in the face of discrimination based on gender or sexual orientation.” Interviews describe her as unsure as to whether she was a lesbian or bisexual. She appeared on 20/20 and on NBC Learn and is widely cited in histories of the transgender movement for the spotlight thrust upon her case and the change it enabled. Rivers spent three years as an activist on issues including the 2008 transgender-inclusive Employment Non-Discrimination Act, and later began teaching at the Five Keys Charter School in a San Francisco jail. In 2012, Rivers represented United Educators San Francisco at a CALSTRS meeting. It’s difficult to find any information on her activities since 2012. In 2013, Rivers started a new Twitter account to replace her old one but it hasn’t been updated since her first tweet.

It’s unclear what Dana Rivers’ motivation was. Michael Campbell, the father of one of Wright’s other sons, Khari, said Rivers was “an acquaintance” of the two women, who he described as “normal moms.” Khari told The East Bay Times, “I knew this woman (Rivers). I don’t know the whole confines of what was going on. I know she (Rivers) was in a motorcycle club. My mom had no part of it. My brother had no part of it. Wrong place, wrong time.”

Khari told Kron4 that he forgives Dana Rivers and knows that “justice will prevail.”

“Authorities have not released a motive but have indicated it might have been a dispute over some property,” is a thing that has been said in multiple posts on this topic.

At the time of the murder, Rivers was living in San Jose, and NBC Bay Area reports that Rivers was a security guard licensed to carry a weapon. It’s unclear what happened to beloved teacher Dana Rivers. The profile I found of Rivers on “The Living Room” does say that she struggled with drug and alcohol addiction for many years but at that time (which seems to be 2004) had been clean for 11 years. It’s worth noting that Rivers is white and the three people she killed are (to the best of my knowledge) of color, and last week saw a rash of racially-motivated hate crimes following the election of Donald Trump.

Our hearts go out to the families and friends of Patricia Wright, Charlotte Reed, and Benny Diambu-Wright. 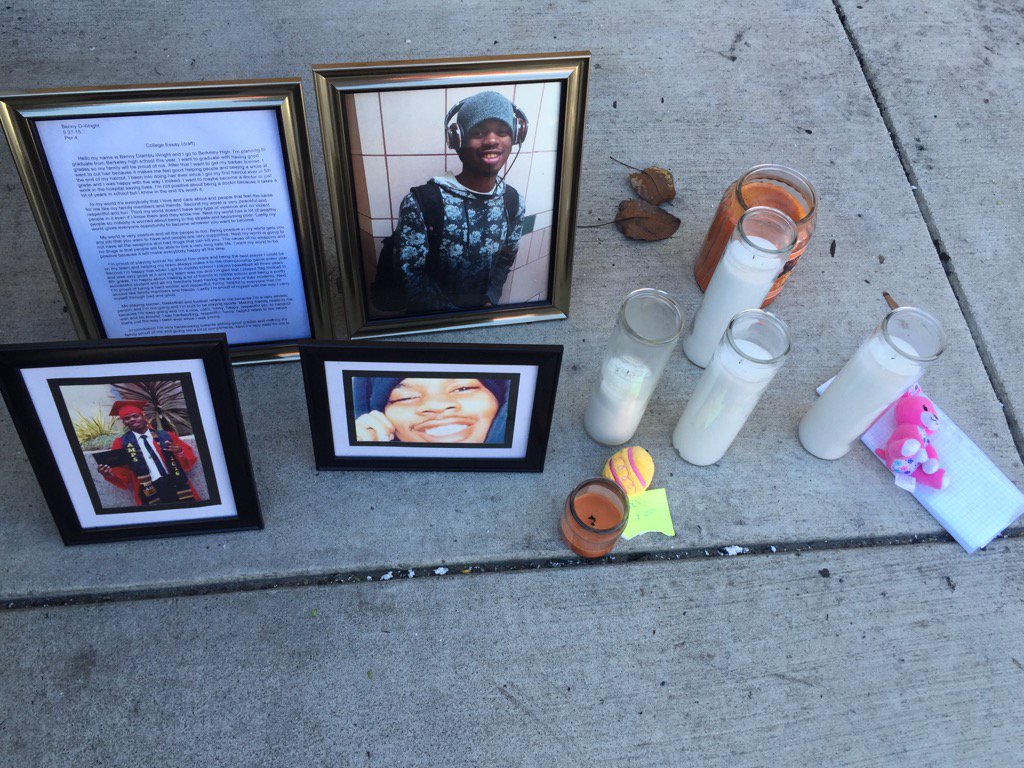 memorial to Benny via @abc7newsbayarea

Trans-Exclusionary Radical Feminists and other anti-trans activists have seized this opportunity to shout loudly at news outlets and on social media that Dana was “really a man” and should be labeled as such. Although there’s nothing but rage in our hearts towards Dana Rivers, it would be unfortunate if this case was used to marginalize and stigmatize other trans women, especially if said stigmatization comes from other LGBTQ women — historically, cisgender lesbian and bisexual women have also been demonized as murderers, rapists and criminals, with every true story of an actual LGBQ female criminal held up to promote falsehoods about the entire group. We shouldn’t perpetuate that here.

The truth is that two lesbians and one teenager who were beloved in their communities were murdered last week, and that we are thankful that their murderer was apprehended and imprisoned and will be punished. We owe this family honor and respect and grief, rather than using their deaths to further push our own community apart, and will not tolerate comments that pursue that kind of divisive agenda.

If you honestly think that the best way to honor and respect the victims is to pour 100% of your energy into yelling about how the killer was “really a man,” then please take that energy to another website.