The Morality Play. I remember it well from theatre history — a medieval theatrical invention wherein the protagonist represents humanity as a whole, and other characters represent good and evil. They advise or tempt the protagonist in turn. Their purpose was to instruct. As stories, however, they were didactic and clunky. Less enjoyment, more Lifetime Special shown in gym class to espouse resilience against danger and reinforce purity. In short, a plea with the audience: please be good.

Last month, I went to a giant writer conference and attended a panel about violence. Aside from what I do here, I write fiction. I write a lot of violence. Violence against women, violence against queers. Violence in the places violence likes to happen. Plus Maggie Nelson was on the panel, and y’all know how much I love Maggie Nelson. She talked about the risks of witness, of writing violence because it happens and depicting it because it shouldn’t go unnoticed. Of course, Nelson was talking about nonfiction. When I write about violence, I’m making it up out of my own head. I stood and asked the panel a lurching, bumbling question — has anyone else ever worried about representing violence against marginalized groups of people? On one hand, we need to represent the real social ills because we shouldn’t look away. On the other, when we normalize a narrative of violence against a marginalized population, isn’t that contributing to something larger than ourselves?

The first answer I got was to eschew all responsibility when creating a thing, because creating a thing is hard enough. That sounds right. That sounds fair. And shouldn’t women, queers, queer people of color, trans people, nonbinary folks — all those people who are not cis straight white able-bodied men — shouldn’t we get to just make narratives with abandon, too? But I don’t become a different person when I sit down to either make or consume my media. And I also couldn’t shake this weird other thing following the question around in my brain: we were talking about writing, at a conference about writing, so why was I thinking about video games?

I suppose the only answer is because I recently pitched a class on reading games as texts — we would read novels and play video games side by side, talking about the impact of gameplay on narrative. Because games are just another way to tell story — and the stories are getting better and better. I’d argue that many of the titles that gain real critical acclaim get there not only because of gameplay or graphics, but because of story. I truly believe video games are another way of consuming novels and short story collections, and that the tools and structure of traditional narratives still apply. They’re two sides of the same coin. The class didn’t get picked up, by the way. But I still strongly believe in the intertwined-ness of stories, games included with all the rest of the ways we figure out what it is to be a person. But in the case of games, with multiple outcomes and varying choices, the responsibility is two-fold: on the creator and on the player.

Five years or so, this might have been an essay about violent video games, coming down one way or another, trying to prove something that can’t be proven. For the record, I don’t think violent video games make people violent. I think people make violent video games because they are violent, and that is scarier. But the thing is, the dialogue has expanded beyond that. There are more options outside of Grand Theft Auto, and in a lot of ways the medium has grown up a lot. No longer solely gladiatorial in nature, we’re seeing a boom in what kinds of stories games can tell. And with that expansion, I’m personally seeing a lot of games tackle issues of ethics, games that directly interrogate the player’s sense of right and wrong. 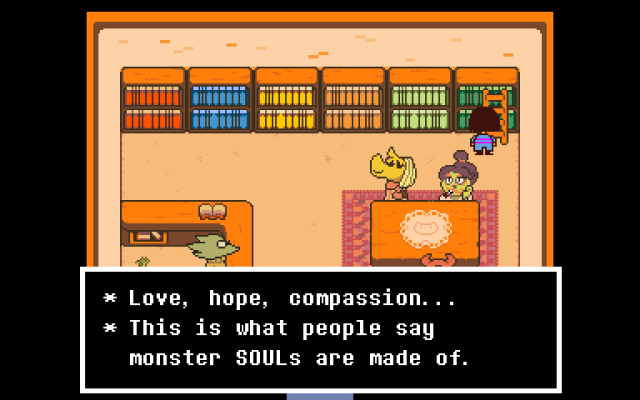 Today, I spent a lot of time playing Undertale, by Toby Fox, for this essay. And I have been trying to write about Undertale for months. Maybe even a year, at this point. I have so many heart-bursting feelings about it, combined with slightly academic thoughts. For one, there are many ways you can play Undertale — the traditional video game way, where you kill things in your path to level up and gain points. Or the pacifist way: exist at level one for the entire game and figure out ways to talk to monsters, to convince them to spare you. There are many shades of grey in between. 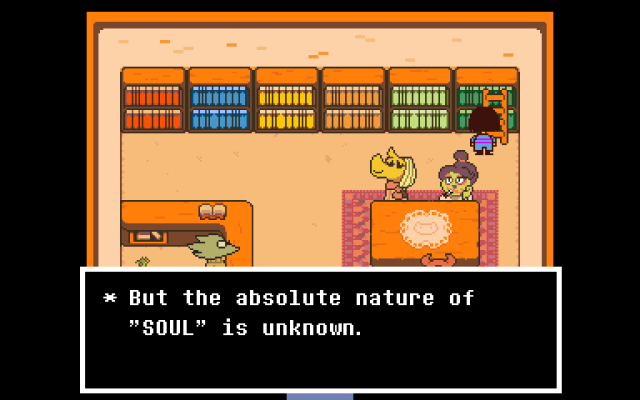 For instance, there’s a mother figure present in the first area of the game. Her name is Toriel, and she’s sweet (if a little overbearing). The first time I played, I killed her. I couldn’t figure out the way around it, and I thought the game wouldn’t let me kill her. But it did. I felt SO BAD about it that, about half way through, I restarted my game entirely. I simply couldn’t continue in a world where I killed Toriel. 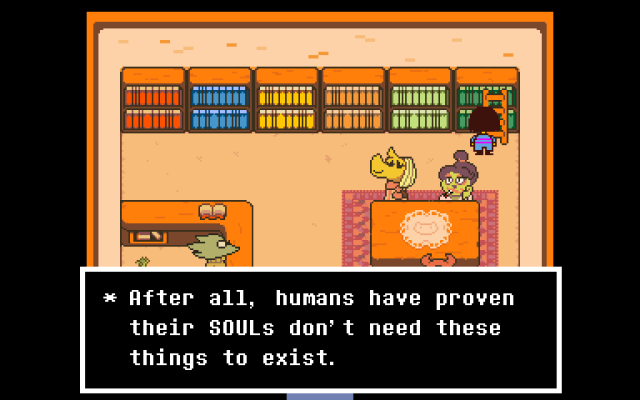 The game knows I did that. The game has told me so. “You murdered her,” a little evil flower said to me, “and then you went back because you regretted it.” The ability to save and go again, well. That’s a privilege, to shape the world like that. Says the flower. Fucking flower. Because yes, I did. That is exactly what I did, and Fox knew we would. Because he is banking on our morals. Because he is explicating to us another way to be a person. With the genderless protagonist, the protagonist named after the player, the game puts the player in its world. And the game doesn’t forget the decisions the player makes, even if the player tries to. It takes on the assumption that violence is necessary to progress. 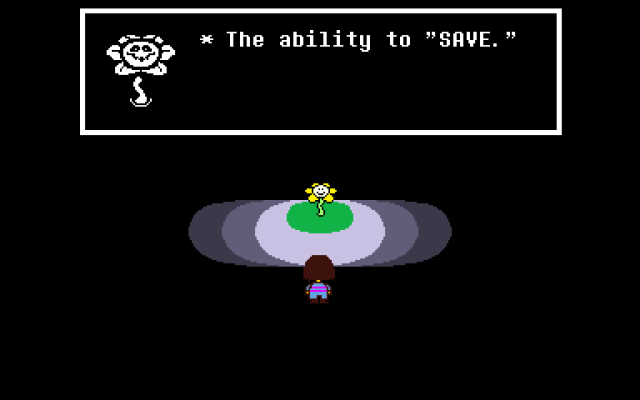 It’s powerful. More powerful than any morality play could be, because it’s not didactic. The gameplay is both unique and nostalgic (the graphics harken back to adventure RPGs of yore). It features in its story the soul. The nature of the soul. And yet it does not feel instructive. Furthermore, it takes on a culture with a poor track record on real world violence, and there’s a subreddit dedicated to it. It won IGN’s PC Game of the Year in 2015. It’s safe to say that gamers are longing for the subversion it brings to the table, longing for reflections of alternate paths in life in the medium they love.

Other games tackle morality too, in ways only games can — The Cave, for instance, takes a rather Shakespearean approach to moral shortcoming. The Cave directly addresses you, the player, and even though you are controlling the tiny people in their beautiful worlds as they make very questionable choices, The Cave instructs you to watch and learn from their inevitable tragedy, their predestined bad behavior. But there is one thing you can do — you can regret. You can show remorse. And, spoilers, at the end of each playthrough, you can make those characters give back the thing they wanted most. My favorite one to play is the Hillbilly because his story directly deals with violent masculinity. He goes on a murderous arson rampage because a woman rejects him. You, the player, can enact his redemption by making sure he never goes on that rampage at all, that he takes the rejection like a person. All because you’ve seen the dark side, you’ve seen where it can lead, and you, the player, are making another choice. A better one. Whereas Undertale berates you for regret, says its not enough, The Cave celebrates it. But something interesting happens with Undertale nonetheless — Toriel is alive now. The player has learned in either case.

Games can do this like morality plays never could for many, many reasons — gorgeous art, seamless story and challenging play are all among them. But I think the most two most important moving parts here are failure and regret: the ability to see the outcome of the bad choice without any real-world consequence and then to select the other choice. And all this as the player, not necessarily as a built out character that you act out. All this as you. Games are growing up, I say. I cannot wait to see what’s next.

So how about you? What games in your arsenal tackle the player’s personal moral compass? Do you think this is as important as I think it is? TELL ME EVERYTHING NERDMOS.