Mira Bellwether, author of the groundbreaking zine Fucking Trans Women, died on December 25th, 2022, at the age of 40. Her partner Callan Molinari confirmed Bellwether’s death on Twitter. According to Bellwether’s GoFundMe page, she’d been diagnosed with lung cancer in October 2021. On December 19th of this year, Bellwether’s health took a turn for the worse, and she was admitted to the ICU. She spent her final days with her partner Callan and her sister CJ while Star Trek: The Next Generation played in the background.

I first learned about Bellwether after reading Fucking Trans Women, an 80-page illustrated guide to sex for “non-op and pre-op” trans women and their partners, which Bellwether self-published in 2010. Here’s how she described the zine in a 2013 Autostraddle interview:

“Fucking Trans Women is, at its heart, a how-to manual, and the finished product is good sex. I wanted to stress the biological facts of our bodies. We have to build a very basic vocabulary and common understanding in terms like, ‘this spot has lots of nerves running through it. This part likes pressure, this part likes stroking, this other part can do X, Y, and Z.’ If you keep sex at the conceptual level, I think you find that it’s not as rewarding as you want it to be. In order to have good sex, I think we have to acknowledge our bodies, come to terms with them as they are, and be able to inhabit them. In other words, to be immanent rather than transcendent.”

The zine covers anatomy, sex techniques, toys, communication, and more. And if you’ve ever heard of “muffing,” you can thank Bellwether for that. In Fucking Trans Women, Bellwether coined the term to describe the act of penetrating the inguinal canals. Just to give you an idea of how trailblazing this zine was: There were no pre-existing diagrams illustrating the bodies and sex acts Bellwether wanted to depict, so in true DIY fashion, she drew the diagrams herself.

Bellwether’s language is never didactic or bogged down in metaphors. It’s honest, inviting, and intensely personal. On every page, it’s clear that Bellwether — a self-described trans dyke — wrote this zine because it absolutely needed to be written. 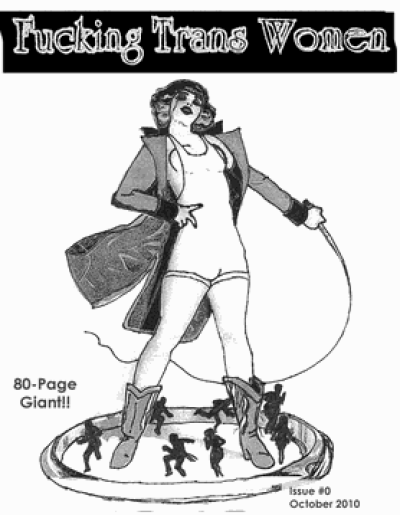 “One of the reasons this zine happened was that I got really sick of explaining things and teaching my lovers about my body during time that should have been spent having sex,” she told Autostraddle in 2013. “When one of my lovers said that she wished she had an instruction manual for my body, I took that and responded to it pretty literally.”

When I stumbled across Fucking Trans Women in 2011, I was thrilled. As someone who’s loved and dated trans women and as someone who went on to write about sex for a living, Bellwether’s zine was exactly what I wanted and needed to read, and many of the lessons I drew from her writing have shaped how I approach my work today. I often come back to this paragraph from the introduction:

“Here be dragons and sea monsters, my fellow genital cartographers, and we have a lot to learn from poking them,” Bellwether wrote. “Let the metaphors, the language, the analogies come afterward. They are helpful, but I believe with great conviction that what I have between my legs is not a metaphor or an analogy but something new and wonderful.”

I’m incredibly grateful for Bellwether’s contributions to the world. I’m thinking of everyone who knew and loved her and everyone who was touched by her work. If you haven’t the privilege of reading Fucking Trans Women yet, I hope you’ll do so in Bellwether’s honor.

You can purchase Fucking Trans Women online for $10. Upcoming proceeds will help Bellwether’s loved ones cover her medical expenses and funeral costs.