On Tuesday, the Supreme Court upheld a Michigan state ban on the use of race as a factor in admissions to state universities, allowing voters to decide the matter on a state-by-state level. It follows an earlier ruling on affirmative action last June, where courts were ordered to give greater scrutiny for the reasons that such programs exist. Both decisions maintain the principle that there are some circumstances in which affirmative action is permissible. 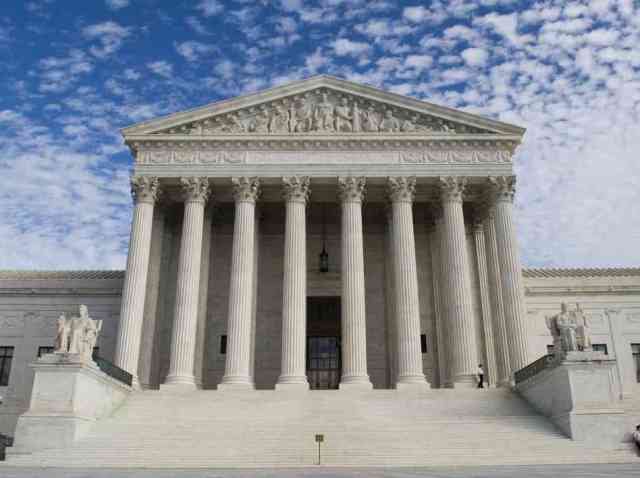 The Supreme Court. Via NPR.

As a mixed race Asian American, I have complicated feelings about affirmative action. Nearly a decade ago when I applied to college, I adamantly checked “other” on every race box. My mom and I picked out vaguely “ethnic” looking floral patterns for the return address labels, but generic, patriotically-themed stamps. I went back and forth on for weeks on whether it would be okay to turn in an essay about training for my black belt in karate, or whether the topic would give away who I actually am. It may sound ridiculous now, but at the time these all seemed like reasonable considerations in a larger strategy to protect me from the nebulous reach of admissions practices my family and I felt certain would only hurt me — namely, affirmative action.

As it turns out, I wasn’t the only mixed race Asian doing this — and in fact, there were many good reasons to try and escape the “model minority” stereotyping or flat out rejection because they’d already accepted “too many” of us. Affirmative action has a complicated, imperfect history. The concept of “minority” has changed over time, and even today, the categories themselves are debatable. For example, as an American-raised Filipina, I feel pretty comfortable being described as “Asian.” Other Filipinos do not. And I see their point — Korean culture is very different from Indian culture is very different from Filipino culture. Does “Asian” erase that? Are “East Asian,” “Southeast Asian,” and “Pacific Islander” improvements in all contexts? Does it even matter if the people magnanimously running affirmative action programs are all white? Were my concerns in 2004 legitimate, or was I just as wrong as all the white people crying “reverse racism?” 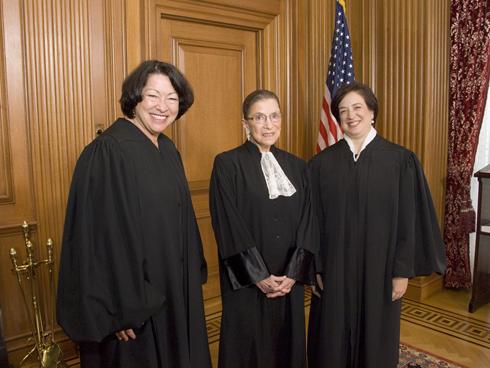 Regardless, affirmative action is one of the most prominent (if controversial) means of addressing racial imbalance in the United States today, where higher education is popularly understood as the primary vehicle for social mobility. Among affirmative action’s longtime supporters is Supreme Court Justice Sonia Sotomayor, who has been publicly outspoken on how affirmative action has helped her personally to move from a housing project in the Bronx to one of the most respected positions in the country.

In the Schuette v. Coalition to Defend Affirmative Action ruling on Tuesday, Sotomayor was joined by Justice Ruth Bader Ginsburg in a powerful 58-page dissent that contextualized the case within a century-long history of racism — both blatant and subtle — where courts have often stepped in to protect equal access and opportunity for minorities. Michigan’s affirmative action ban, Sotomayor explained, is part of an effort to “make it more difficult for the minority, and the minority alone, to obtain policies designed to foster racial integration.”

Justice Elena Kagan — who many would have expected to share similar sentiments — presumably recused herself because she had worked on the case as United States solicitor general. 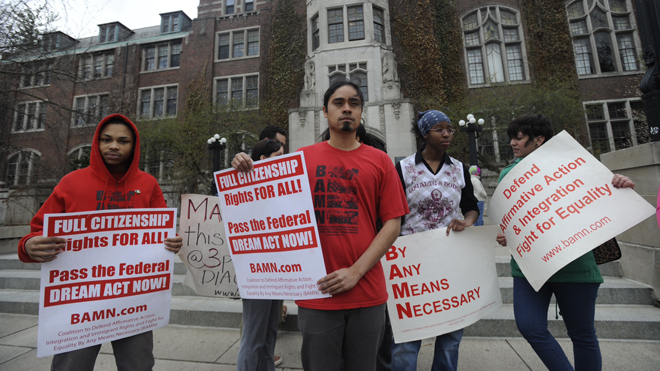 Jose Alvarenga, center, BAMN (By Any Means Necessary) national organizer, and others protest the Supreme Court ruling on the campus of the University of Michigan Tuesday, April 22, 2014, in Ann Arbor, Mich. Photo by David Coates via AP/Detroit News.

Although Sotomayor and Ginsburg were outnumbered 6-to-2, the Supreme Court decision to uphold Michigan’s ban is far from the end of affirmative action. As mentioned earlier, the court maintains support for the principle that there are some circumstances in which affirmative action is permissible. In the Schuette case specifically, the fact that voters were allowed to make the decision for their state was a major factor in deciding its constitutionality.

Existing practices in other states will be maintained — including California and Washington state, where similar affirmative action bans mean that state schools will continue race-blind admissions processes. Private schools are not affected, either in Michigan or elsewhere.