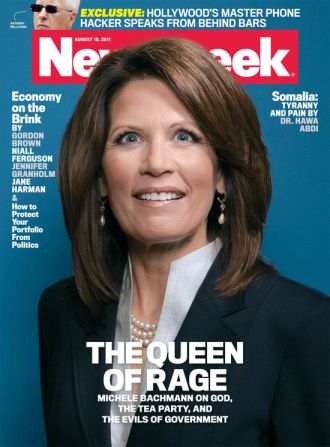 slate.com thinks this is sexist

Michele Bachmann continues to exist and do things we dislike and appear prominently in newspapers, magazines and websites.

For example, Bachmann is the subject of a really great New Yorker  feature, entitled The Transformation of Michele Bachman, written by a sane person who spent a significant amount of time on her crazy-plane.

Also, as you probably already know, Bachmann appears on the cover of Newsweek this week and the story is getting a lot of attention not for its contents (there’s really nothing worth noting in the article) but for its cover, prominently featuring Michele Bachmann’s psychotic eyeballs and frightening facial expression. Many claim the cover is sexist and exploitative, or that it makes Michele look “unbalanced” (perhaps this is because she IS “unbalanced,” but I digress). Michele Bachmann herself, however, is so far totally okay with it. Regardless, we already hated Newsweek and we already hated Michele Bachmann.

For supplementary reading, The Atlantic Wire has a deeper investigation of the books Michele cites in the aforementioned feature articles as influencing her present political and social ideology. It should come as no surprise that in addition to revisionist history, these books and their authors often promote racist and homophobic views.

Now onward to today’s newest, freshest piece of relevant-to-your-interests news, which comes from Bachmann’s visit to Iowa, where she’s been shoring up support for her improbable reign of terror. According to MSNBC, Bachmann visited Point of Grace Church outside of Des Moines, Iowa on Sunday for a service which focused mainly on how terrible homosexuality is. Keep in mind that conservative gay group GOProud has actually said they’d vote for this woman. Just think about that. 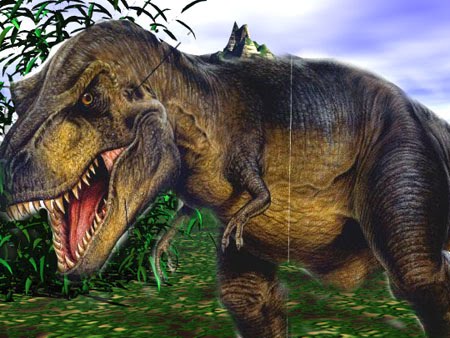 Later in the service, the pastor screened a testimonial video starring Adam Hood, a guy who said he was gay until having “a conversation with God” which inspired him to “stop being gay.” (In other words, a conversation with God inspired Adam Hood to relocate his homosexuality to the deepest annals of his psyche where it’ll fester/grow/develop as unchecked self-loathing, rampant self-denial, and probably rage-inducing sexual frustration.)

In the video, Hood added that his wife is nine months pregnant, which means they’ve had sex at least once. Other important quotes from this video include:

+ “I am so happy God has given me natural affection for a woman.”

+ “We need to have compassion for people that are bound by that sin. And it is a sin. Call a spade a spade.”

+ “I came from being the most extravagant homosexual, I was on ecstasy, GHB, Special K, all the drugs you can imagine, and I had one of the best looking boyfriends in the Castro, and I was celebrated, I had it all, I had it made in the shade — to becoming such a hard core on fire Christian, I am martyring for Jesus I am telling you I want it.”

If the name “Adam Hood” sounds familiar to you, it’s because you saw his video last year, when it first made its way around the blogosphere. Pam’s House Blend:

If you want to get to his marital Jeebus moment, it’s 6 minutes into the video. He spends the first part of the video talking about his early days, drug dealers, satan worshippers, etc. It’s beyond bizarre, with Hood contemplating the metaphor of taking the blue or red pill a la The Matrix, and reminiscing about having the best looking boyfriend in the Castro. This man is in serious need of help.

Bachmann also had her own special moment to shine in the great glory of God, where she read from The Book of Philippians: “Whatever is pure, whatever is lovely, think well on these things.” Unfortunately she seems to have a misguided sense of what is “pure” and/or “lovely.”

[Sidenote: You know that feeling you feel when someone writes a really irritating annoying comment on an internet site that you love dearly, perhaps this one, and you just simmer there debating whether or not to comment back because it’s just SO! WRONG!? I bet that’s like how G-d feels when Michele Bachmann opens her piehole.]

According to The Winnipeg Free Press, a Rasmussen Report survey that came out Monday shows Bachmann at 22 percent and Romney at 21 from Iowa caucus-goers. It’s likely that some of this support was inspired by Michele Bachmann’s stories about growing up in Iowa and her family’s Iowan roots which are almost entirely fabricated.

However, the idea of Michele Bachmann as an actual contender for President seems, despite the numbers, wildly unlikely. Even our worst enemies are skeptical of Bachmann’s reign — According to Crooks & Liars – “Bill O’Reilly is pretty good at hiding his disdain for Michele Bachmann’s policies because he knows she’s too radical to get elected and will ultimately hurt the GOP, but he doesn’t want to alienate his Tea Party base of viewers, l which is strong. He slyly calls her beliefs into question whenever he can.”

But, as I mentioned in the beginning of this article, Bachmann has allies in unlikely places — for example, ACTUAL GAY PEOPLE:

GOProud, a gay conservative group that has built its image through identification with the Tea Party, came out recently with a statement condemning the glitter bombing of a family counseling clinic co-owned by potential Republican presidential candidate Michele Bachmann and her husband…

Contrary to what would be expected from a group that bills itself as acting in defense of LGBT civil liberties, GOProud has behaved as though the clinic and the procedures it performs are completely irrelevant to their community, and declined to use their position to speak out against reparative therapy. Rather, their greatest concern is that some flamboyant, liberal, activist gays might make gays like themselves look bad in front of the Bachmanns.

We try to make a “point” in every post we write on Autostraddle, but I’m not really sure how to make a point out of all this.

I don’t think there is a point to be made about Michele Bachmann anymore.

She’s crazy, she makes shit up, she lies, she hates gay people, people like her anyhow, including gay people who we probably don’t like, and the simple fact that she exists is a continued reminder that America is a baffling place to live right now. What the hell is going on here, seriously.