HEY GUESS WHAT. Lumberjanes launches this very day which means it’s not too soon to declare this day… 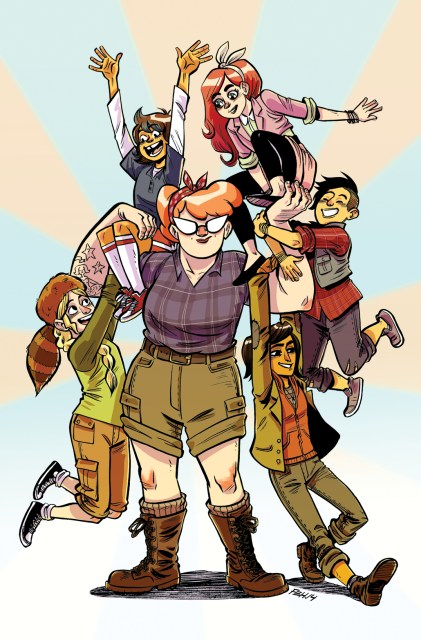 AKA the day the first issue of Lumberjanes comes out. And it’s coming out with a bang and perhaps a yeti.

In case you missed it, Lumberjanes is awesome and also the brainchild of Grace Ellis (of Intern Grace internet fame) and Shannon Watters (amazing A-Camper and editor at BOOM! Studios), written by Grace and Noelle Stevenson (who you’ll know from Nimona) and drawn by Brooke Allen. The premise of the series is five friends — Jo, April, Mal, Molly and Ripley — attending a summer camp and also fighting monsters and supernatural beings. It’s like Buffy The Vampire Slayer meets Gravity Falls and it features much-needed diverse female characters created by a cast of whip-smart artists and writers (all women!). Friendship is the most important relationship in this story, which is a refreshing change from all the media aimed at young women that only highlights romantic relationships. Lumberjanes is the most girl power I’ve experienced since the golden era of the Spice Girls.

I figuratively locked Grace Ellis and Shannon Watters in a dark room and made them talk a little bit about their creative process in celebration of today’s AMAZING launch. Also: preview art!

How did the idea for Lumberjanes come about? It didn’t have anything to do with A-Camp, did it? Because that would be so cool.

Shannon Watters: The idea itself came during one of Grace and my brainstorming sessions for projects in general. I think the initial seed was the sentence, “Girl scout camp…monsters?” or something to that extent. We’d been playing around with characters for a “Magic 5” story for awhile, so both of those threads came together in this project.

As far as A-Camp goes, the first A-Camp upgraded Grace and my budding internet bromance to full-on best bro in the universe status, so THANK YOU AUTOSTRADDLE. Mainly at camp we don’t do much work, though — we just drink coffee in Wolf together every morning and throw shade. It’s the most important part of camp/our creative process. 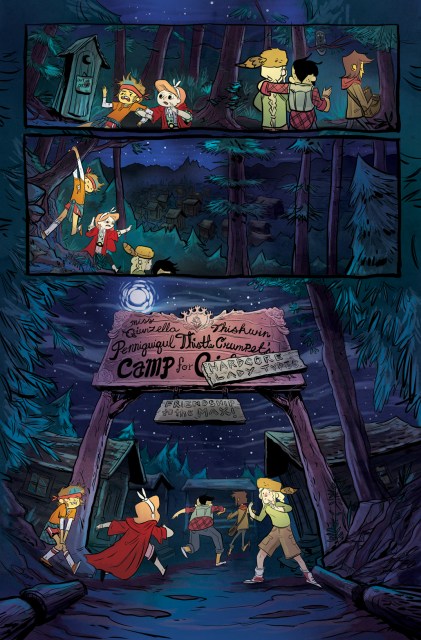 Grace Ellis: Hahaha ok, I just went back to our original brainstorming Google doc (called “OH MY GOD I CAN’T BELIEVE THIS IS HAPPENING”). Here are some semi-relevant parts:

“This is an inspiring string of words that I posted on Twitter weeks ago and think will probably help our souls:
Brutes, baby dinosaurs, pals, a confused yeti, Davy Crockett hats, gentle caresses, an ugly puppy”

“I really like Bigfoot and Yetis. Why are they always boy bigfoots and yetis? Why not girl bigfoots? BotP I assume. Big ups, genderqueer yetis.”

“I feel like I’m most into the lumberjacks and the summer camp seeds, but that might just be because I am me, not The Average Cool Preteen”

“what if it’s a summer camp where they do weird things like lumberjacking? also can they be girl scouts, like off-brand girl scouts”

And that’s how Lumberjanes got born.

What kind of need in the comic industry do you see for this content and how is Lumberjanes going to fill that need?

S: No one comic can fill “that need,” which is just the need for diverse viewpoints in mainstream comic books, but the pre-order buzz for Lumberjanes has been excellent. People are hungry for this kind of comic, one that features all-lady creators and an all-lady main cast and characters not pigeonholed into stereotypical roles! Hopefully if it continues to be successful, it and other incredible comics will continue to open the door.

G: In another interview I described this comic as potentially being revolutionary, which some people have already taken me to task for, for reasons that I completely understand. That being said, I do think this comic could be revolutionary in the sense that I want it to contribute to a revolution in comics. I’m not saying we should nuke the entire comics industry from orbit and start again, but I do think that only certain kinds of stories are being told, which is true for all major media. (I should note that I really do think BOOM! Studios is doing a good job in this regard).

So my ultimate hope is that if Lumberjanes can succeed in giving us a voice, it can encourage the powers that be to seek out more stories that give a voice to even more people.

S: We’re all feminists and some of us are queer — our experience and our passion for both of those things mean they’re going to make their way into the comic in different ways. It goes back to what I was discussing earlier regarding different viewpoints in the mainstream comics marketplace; because of our specific backgrounds, our comic will reflect something that a straight guy writing about the same basic subject wouldn’t.

G: I agree. I also think that we’re all really cognizant of how characters who aren’t white men normally function in stories, so there is certainly a conscious effort on our part to avoid clichés and stereotypes, particularly with regard to “strong female character” tropes.

As far as just straight-up queerness is concerned, it was important to us that there were actual queer characters who were exploring who they were, at least as much as you can when you’re a tween in nearly constant supernatural peril. The characters were written that way from the very beginning, which I did on purpose because I knew that if we wanted queer characters, especially young queer characters, we were going to have to be unyielding. But I mean, they’re also children, so it’s not like their story is racy or anything. They’re just kids trying to figure themselves out. 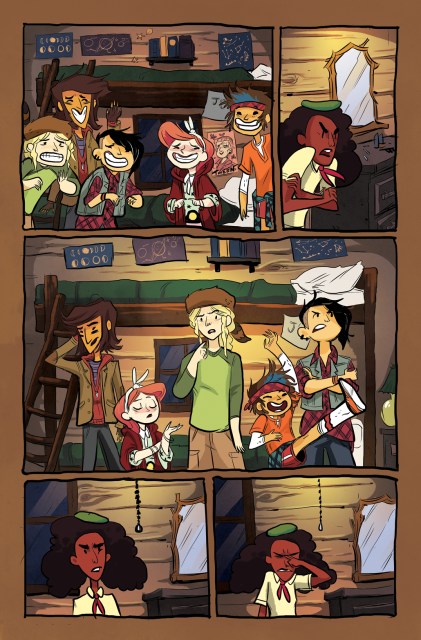 What’s been your favorite moment from working on this project thus far?

G: I love watching kids read it! We handed out free 8-page previews at LA Zine Fest this year, so Shannon and I were literally running after kids and making sure they got copies. It was the first time any part of the comic was out in the world. There was one girl who sat cross-legged on the ground as soon as I handed it to her, read the entire thing, stood up, and told me that she liked it and asked if there was more, and like, my heart can’t handle that much joy. I was fighting off happy tears all day. This comic would have meant so much to me as a kid, so to know and literally see that Lumberjanes is affecting girls in a positive way now makes me indescribably happy.

Okay, so here is the part where you pay compliments to everyone involved — tell us how great your group is!

S: They are all hella dreamy. Also, we have the best hair in comics, I’m pretty sure.

As y’all know, we have a lot of talented artists and storytellers in our community—any advice for those looking to get their own comics out there/start drawing comics/start writing comics/etc?

S: My day job is a senior editor at BOOM! Studios, and I edit and supervise the KaBOOM! (all-ages) and BOOM! Box (weirdo) publishing lines there. The best thing you can do this to just keep making comics. I hire a lot of cartoonists who got their start on the web, because not only have they proven they can be self-directed and motivated, they’ve shown they can do good work consistently and improve. Don’t just do pin-ups, good lord. Find a creative partner who makes you better. Be kind, respectful and gracious to everyone you meet in the industry. Mainly, though, just do good work.

G: I mean, this is my first comic experience ever, so maybe it’s silly to think I can comment on this. But seriously, just do a lot of work and then don’t be afraid to put that work out into the world. The whole Lumberjanes team is known mostly on the internet, which is a testament to Shannon’s prowess as an editor but also to the fact that you never know who’s looking at or reading your stuff online. 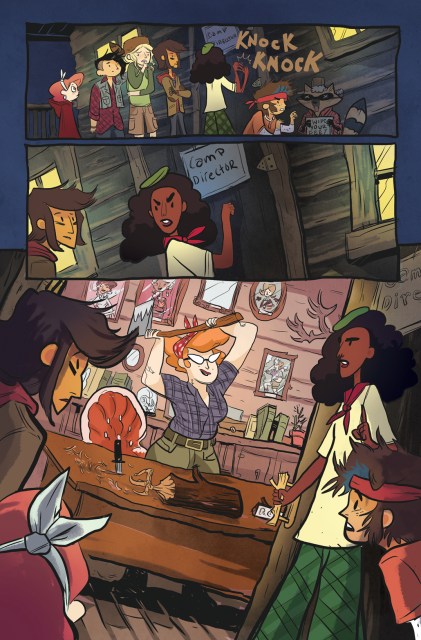 What is the best way to obtain this comic with our hot little hands while still letting the comics industry at large know that this is the kind of content we want to see?

S: The best thing you can do this week is go into your local comic book store and buy it, and pre-order the next issue if you didn’t pre-order the first one! You can check out Noelle’s post about pre-ordering and how important it is.

That support lets retailers know you’re hungry for that kind of content, so they keep ordering it and keep the comic in business! If you’re not near a comic shop or your local shop sucks, you can always order on boom-studios.com. [Editors note: may we recommend the 8-issue subscription?]

Are there any surprises you could hint at for us? Anything the Autostraddle audience should be watching out for?

Feel free to have a lot of feelings in the comments below. My main feeling is a) how quickly can I obtain a copy and b) I want this to be a TV show, a tee shirt, a few fine art prints — IDK, I kinda wanna plaster my life with Lumberjanes.