LILO:
Hortense at Jezebel has written a lovely and thoughtful but ultimately also depressing post about why nobody is going to help Lindsay Lohan. Sadly, not everyone’s love for Lindsay is as true and pure as ours, and we’re getting a little tired of all these people who are really “concerned” about her (oh hey Michael Lohan, what’s up). Hortense puts it best: “The truth, I suspect, is that many people are actually hoping Lohan does die, or at least comes pretty fucking close, because that’s the story that’s going to sell. That’s the story that allows her dirtbag father to position himself as a savior of sorts by holding press conferences to discuss his daughter’s condition and present himself as a Jamie Spears-wannabe who seeks to save Lindsay from herself. That’s the story that allows “sources” to go to TMZ and spill their “concerns” about Lohan’s health and well-being. And that’s the story I’ve tried to write around several times, because it is so sick, and so sad.” Of course, to a certain extent it goes without saying – celebrities have maybe always been there for us to project our own emotional needs onto – but for us it strikes home because Lindsay is maybe a more relatable celeb than, say, Jesse James. She’s young, she’s queer, she wears leggings and has an ex she can’t quite get over, she’s obsessed with Lady Gaga – sound like anyone you know? In reality, she’s not that different from a lot of us, and that makes it a little easier to see that the people who hate on her are more interested in schadenfreude than in any of Lindsay’s actual life decisions.

And as Hortense also points out, we have no way of even knowing if these “concerns” about Lindsay are true – that when you think about it trying to construct a coherent narrative of someone’s life based on a series of tweets and 15-second video clips from aggressive paparazzi. Most of what we talk about when we talk about “what’s going on with Lindsay” (or any celebrity, really) is based only on what we’ve heard other people say about what’s going with Lindsay. “And yet even in writing this article, I am complicit in the Lindsay Lohan Bullshit Complex: all I know of Lohan’s alleged troubles is what I see in pictures, what I hear in gossip items, and what can be put together from Lohan’s past history of addictions… The truth is that we don’t know the truth.” And that in the course of writing and then reading this post itself we’re feeding into it. Imagine that. Maybe it’s a sign that we could try finding other things to talk about, just every once in a while? (@jezebel)

SAMRO:
All of our internet lesbian dreams came true: Samantha Ronson tweeted about Lady Gaga! The verdict is that she’s way better than Britney, but definitely no Madonna. Ok SamRo, whatever, you did a great job at the Dinah white party this weekend! (@ohnotheydidnt)

FACEBOOK:
Frank Anthony Polito, author of the 2008 Lambda Literary Award nominee Band Fags, says that Facebook has deleted the fan page for his book because it was apparently “hateful, threatening or obscene.” Polito says he’s contacted Facebook about the removal, but as of Friday still hadn’t heard back. This is interesting, because there are plenty of Facebook pages that actually do use the word “fag” in a “hateful, threatening or obscene” manner that haven’t been deleted. (@theadvocate)

SAFRAN FOER:
Jonathan Safran Foer’s second novel Extremely Loud and Incredibly Close, which is a book you should maybe read, will be turned into a movie by producer Scott Rudin and screenwriter Eric Roth. At least it hopefull will be, as apparently Rudin has in the past secured the rights to both A Heartbreaking Work of Staggering Genius and Me Talk Pretty One Day and then let the projects fall by the wayside. (@pajiba)

GLEE:
Cute pictures of the cast of Glee on the White House lawn for Easter!(@ohnotheydidnt) 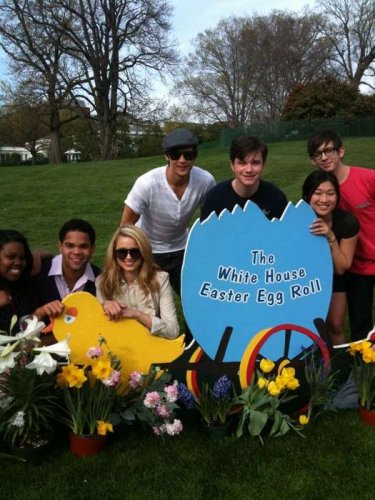 GAGA:
She said some really awesome stuff in this interview, like that “nothing will come between her and her art, even if it makes her go mad.” “I’m already crazy,” Gaga, 24, told OK!. “I’m a fearless person. I think it creeps up on you. I don’t think it can be stopped. If my destiny is to lose my mind because of fame, then that’s my destiny.” She also claims that stardom for her was “like rocket fuel,” and that sometimes her energy is so high she doesn’t sleep for days. I wish she would take a nap or something, girl is crazy! (@digitalspy)

KAKI KING:
We just found out that the supersexycool interview our girl Carlytron did with Kaki King will be airing this week on Logo – make sure you catch it on April 11th at 12 midnight! In the meantime, check out the promo!