Lez Try It is a monthly column in which comedian and writer Allie Rubin picks one component of lesbian culture to try for herself. This month: cooking and eating creamed spinach with poached eggs and martinis, from the movie Carol.

We all know that Carol is a cinematic masterpiece and a lesbian touchstone and an overall wonderful visual experience. This is true! And YET: it contains one scene that never fails to send me into an absolute tailspin: the one in which Carol and Therese have lunch together and both order creamed spinach over poached eggs and a dry martini with an olive. This scene always gets me because this combination of words should be nonsense and yet it is not! It is the very silly meal that the characters of this very serious film choose to eat. Here are the (SUBSTANTIALLY ABBREVIATED) thoughts I have about this meal whenever I watch this movie:

– Good lord, this meal is for rich people. Every component of the dish is velvety and smooth; there is no texture, no croutons of hardship, no chili flakes of poverty. This dish didn’t bother to pack a snack for its flight because it knows the food in first class will be more than adequate. This dish just bought a second pair of winter boots at full price. This dish just saw you eating at the cheap hot dog place and was like, ew, no thank you!!!

+ This meal might be an absolute nightmare of a seduction? I mean, it’s 50% dairy and 50% pure alcohol, with a loose garnish of spinach. I fully admit that I might be wrong about this because I am terrible at seduction, and maybe the dairy + alcohol combo is actually some kind of secret seduction tool that all sexy people know about? Look, all I know is that I work retail and if someone left their gloves on the counter during the holiday season I would be like, oh fuck, we’re gonna get such a bad Yelp review because this is somehow going to be my fault, and then we’d end up keeping the gloves for three months before just throwing them out, and then the woman who left them would write us a bad Yelp review about how we stole her gloves and then I would get reprimanded by my boss and at NO POINT would there be martinis or seductions!!!

+ The meal is an absolute nightmare of a seduction, part 2: this meal is going to wreak havoc on your tummy. If I wanted to seduce a lesbian properly I would give her hay and apples as if to say, let us carbo-load like they do for the marathons, and also now if we have sex, we will be thinking “it’s so nice to be having this sex” the whole time and not “oh sweet lesbian Jesus, I hope I don’t fart!!!”

Anyway, every time I watch Carol, I think, what is the deal with this dish? Is it actually good? Does it taste like snot? What kind of a name is Harge? (Harge is the most masculine name. It sounds like a boat that’s also a cop. Harge is the sound that wood makes when you pour beer on it. Harge!) Finally, I pitched it to my editor and she was like, just cook the damn meal and let us know how it is. So one night after work, I bought all the ingredients and invited my lesbian friend Beth to come over and try to poach eggs and drink tall glasses of gin with me and talk about Carol. Harge!

I won’t lie: I was dreading having to cook this. Although I consider myself a decent cook, much like Amy Adams in Julie and Julia, I had never poached an egg before, and much like Amy Adams in Arrival, I am generally very busy and don’t have a lot of time to prepare for egg-poaching. Also, I used to have a blog where I cooked Guy Fieri food , and having to cook his grilled ketchup and hot potato water and steak spaghetti blaster recipes managed to turn cooking for me from a fun activity into a joyless slog through a tundra of pain, and long story short: I was worried this recipe would further add to my stunt cooking-related emotional baggage.

When Beth came over, I put myself in charge of the food and her in charge of the drinks, and she promptly mixed up two large, room-temperature gin martinis in a cocktail shaker with a loose lid. As the gin rained down upon my kitchen like we were old-timey doctors sterilizing wounds on a Civil War battlefield, I felt very happy that bars exist because mixing drinks for yourself at home is for chumps. We then spat in the face of authenticity by forgoing olives in our drinks, because olives taste like twisted little nuggets of the devil’s flesh and whenever I see an olive bar I wish I were good at arson. “I’m cooking,” I whispered proudly to myself as I watched my friend mix two different kinds of alcohol together and then pour it into a glass. 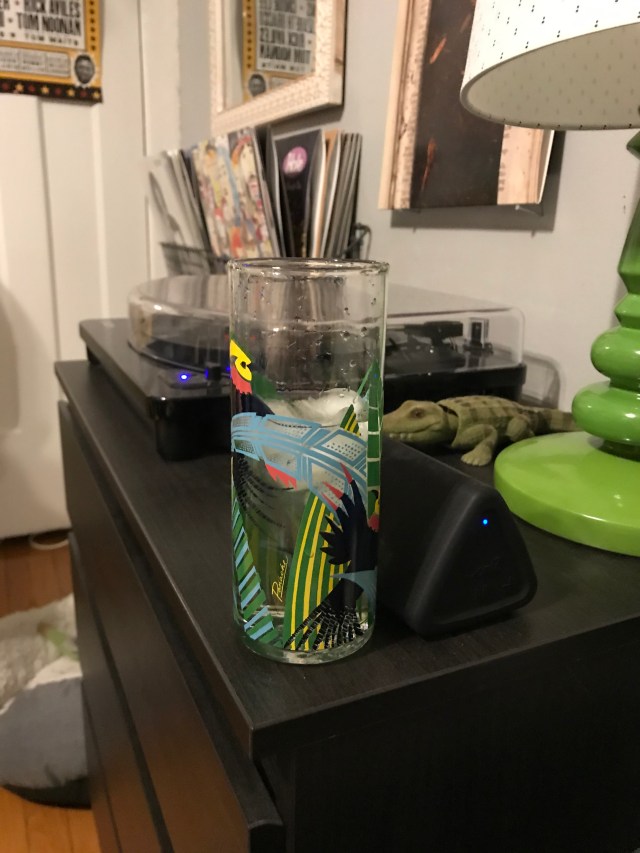 While our martinis chilled in the freezer in their highball glasses (martinis are a social construct! Also I am poor and don’t own martini glasses, leave me alone), I turned my attention to the cooking. The recipe (see below) turned out to be surprisingly easy, and I even poached an egg properly for the first time and no one died! When I realized I wouldn’t be giving anyone salmonella that evening, I felt as giddy as Therese talking about train sets. This meal essentially involves cooking spinach, mixing it into a creamy roux, and topping it with a poached egg. It was pretty simple and was done in less than an hour, giving me plenty of time to do the dishes and give my sous chef a long lecture about why eating plastic is bad (my sous chef is my cat. Beth has pretty much nailed the not eating plastic thing. Go Beth!). 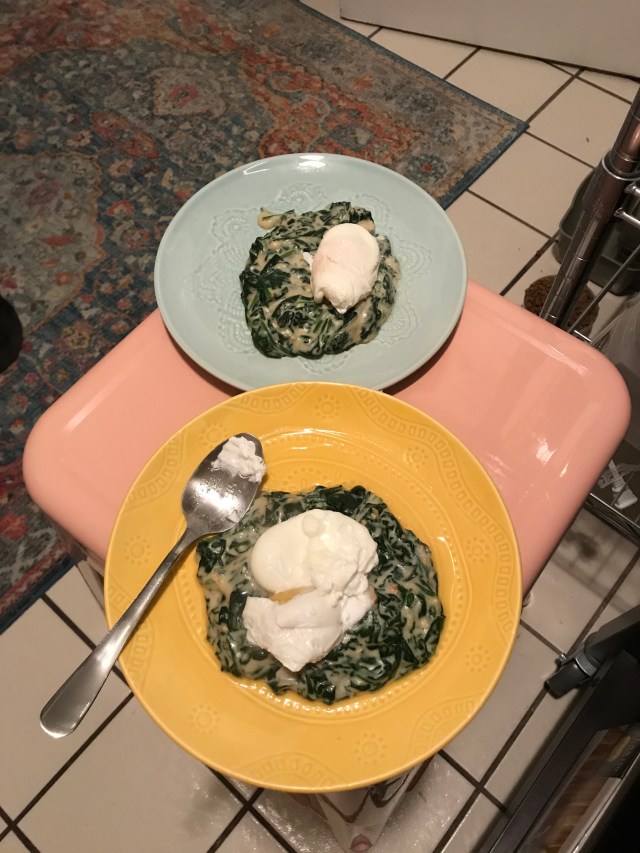 How was the dish itself?, I hear you asking, unamused by my many asides and frantic for information. Well, dear reader: it was fine. It was texture-free and decidedly on the bland and gloopy side, but that could easily be fixed by spooning it onto some bread (which we did) and adjusting the seasoning (which we did not, what am I, a spice merchant?). My biggest epiphany was that it basically tasted like spinach dip, and thus that the Oscar-nominated film Carol features a scene in which Carol and Therese spend a fancy lunch eating spinach dip with a fork and washing it down with glasses of alcohol. I ended up eating my entire serving, although it was rich enough that it took me a pretty long time. In contrast, I only managed to finish half of my ‘martini’, because every time I took a sip from my tall glass of warm gin my bones creaked like old floorboards and my heart wrote another poem about how poorly I treat it.

Beth agreed with me and said that the food was fine and greatly improved by the addition of bread (as are most foods, we both nodded sagely). I said we should get into the Carol spirit by going out on the town and threatening a man with a gun! But she said no so instead we engaged in the great lesbian pastime of talking about therapy. It was a very pleasant evening and we both didn’t feel too sick after our weird lesbian dinner, which I would call a success. Harge!

The inclusion of creamed spinach and poached eggs with martinis in Carol is an odd choice, yes, but it’s also a meaningful one. It serves as a signifier of wealth and luxury and hints at Therese’s introduction into a world with which she is unfamiliar. Now that I’ve eaten it, I can also tell you that it’s a little strange and smooth and feels a lot like you’re eating dip. I did not feel like partaking in any kind of seduction after eating this: when Beth left, I ate three Oreos and went to sleep. I recommend making this if you find many common foods, like rice or pasta, to be too sharp and flavorful for you, or if you want something for dinner that you can probably slurp down through a boba straw. Despite its mediocrity, I feel strong with the lesbian power I have gained from eating this meal. Somebody buy me a train set!

Join A+
Related:carollez try it