Jesmyn Ward’s Sing, Unburied, Sing won the National Book Award for fiction. (Your talking point on the National Book Award is that this year it had the highest number of women as finalists ever.) In her speech, she discussed being told over and over that her stories were not universal stories; writing at Electric Literature, Jennifer Baker elaborates: “The subtext of rejection, especially for marginalized writers, often translates to an inability to ‘reach the mainstream,’ a lack of ‘connection.’ The term ‘universal stories’ gets thrown around as though it’s an easy method to master. As though ‘universal stories’ truly means universal, when in fact it is its own code.” And at Hazlitt, Ward discusses pain, magic and realism, voodoo, legacy and more.

If you’re in Los Angeles, go see Radical Women at the Hammer Museum.

“Durga Chew-Bose’s first essay collection, Too Much and Not the Mood, is a ranging, intricate work crowded with lush detail,” writes Annelise Jolley at the Millions.

“It’s as simple as being
a sculpture, having
a life.” 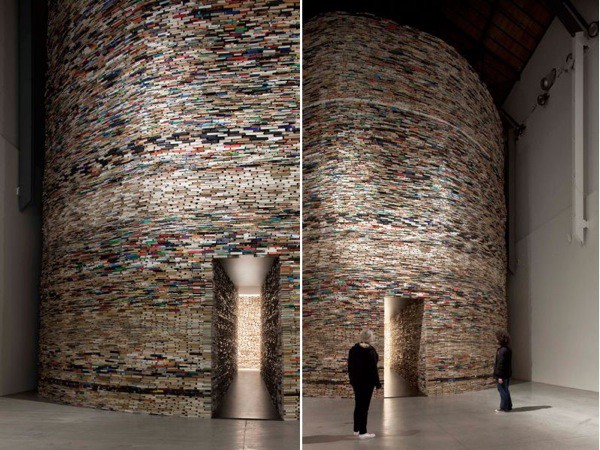 via Electric Literature’s “The 7 Most Amazing Tunnels, Towers, and Mazes Made of Books“

Women writers from the Western literary canon were friends, but why are their friendships so often overlooked? At the Millions, Emily Midorikawa and Emma Claire Sweeney, coauthors of A Secret Sisterhood: The Literary Friendships of Jane Austen, Charlotte Brontë, George Eliot and Virginia Woolf, write:

“Persistent images of isolation can be used to weaken female power by giving the impression that there are no tried-and-tested models of intellectual collaboration between women. A one-off genius, set apart, is an aberration who poses little threat to centuries of patriarchy—as is the ambitious woman, cast as the enemy of her peers. Especially in today’s uncertain climate—when women are fighting for control over their own bodies, and when their contributions are so often dismissed—we must resist such insidious tactics of divide and rule. The rich history of sisterhood offers a shaft of light during dark times: it is imperative to turn to the example of female forebears—women who always knew that they could best achieve greatness by aligning themselves with other women.”

In the Los Angeles Review of Books, Ursula K. Le Guin discusses her process, science fiction and fantasy, the imagination and more.

“Paying attention to nature is a springboard to the sacred.”

Tag yourself: how 11 writers organize their personal libraries. I’m one shelf of future reading, a few shelves by subject but I have to be into the subject or I don’t want to look at it all at once, and the rest alphabetical.

Canada’s Room Magazine is going to have a queer issue. Submissions close January 31.

Read these books for the Trans Day of Remembrance. Read these books by women this month. Read this book if you have a dead mom. Read flash fiction by women. Read these classics in translation. Read lesbian romance. Look at the most beautiful books of 2017. Read these 30 dystopian novels by and about women.