Back in February, Elaine told us all to keep a lookout for The Knife’s new album, Shaking the Habitual, which comes out on Tuesday, April 9th, via Rabid Records. But it’s 2013, so you don’t have to wait until Tuesday to hear it! You can listen on Pitchfork Advance, the indie behemoth’s new streaming service (PRO TIP: the new Rilo Kiley b-sides/rarities compilation is there, too). I highly suggest it. Especially since if you choose to do it this way, you will also be treated to giant flashing artwork the color of a radioactive watermelon, and when your coworkers ask you what you’re listening to, and why you are bobbing your head up and down in that way, with your eyes all wide and bloodshot, you can switch tabs and frighten them away, because you are listening to The Knife and no one should bother you. 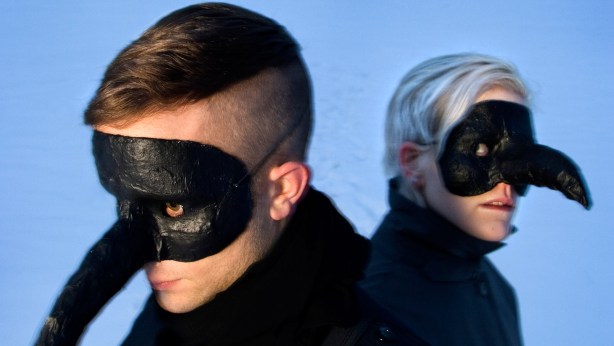 “WHEN WE AREN’T MAKING MUSIC, WE ENJOY SEARCHING FOR SHINY THINGS”

For the yet-unstabbed, The Knife is a brother-sister duo from Stockholm, Sweden. Olof Dreijer and Karin Dreijer Andersson make electronic music that generally sounds, to me, like a seaweed creature reanimated by lightning and dancing in front of a beach campfire. They also make political statements, such as the time when they won a Grammy in Sweden and sent two Guerilla Girls in their place to protest gender imbalance in the music industry. Or the time Karin accepted an award for her side project, Fever Ray, in a costume that makes Lady Gaga look like a nine year old on Halloween. 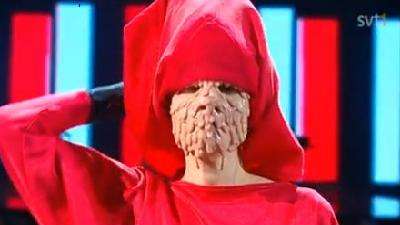 This time, the group has decided to do both at the same time, very openly. The Knife came out of hiding and actually did press for this album, and used a lot of it to hammer home the issues they studied and the problems they’ve been thinking about.”In the past we’ve worked with how structures in society affect us on a psychological level, but we’re trying to be a bit more clear this time,” Karin explained in an interview with Daze Digital. Olof took classes in queer theory and feminist history, Karin borrowed his textbooks, and they brought Judith Butler and Jeanette Winterson and drag and intersectionality and environmentalism into the recording studio. You can read the results, obliquely but powerfully, in the manifesto they released in lieu of a regular album announcement:

“We have made some decisions.
We want to fail more, act without authority.
Plus there’s something phlegmatic about the world state don’t you think?
There’s a blood system promoting biology as destiny.
A series of patriarchies that’s a problem to the Nth degree.
What about hyper-capitalism, this homicidal class system, the school system that’s kaput?
Then there are castles everywhere—look at them fake tanning and signing autographs!”

You can see them in the biting satirical comic about “educating the over-wealthy” that they have up on their website:

GREAT IDEAS ALL AROUND

Or in the music videos and accompanying statements for ‘A Tooth For An Eye‘ (“Who are the people we trust as our leaders and why?”) and ‘Full of Fire‘ (“Who takes care of our stories when the big history, written by straight rich white men, erase the complexity of human’s lives, desires and conditions?”) which was made by feminist porn director Marit Östberg. Most importantly, you can hear it in the music. The album’s title is taken from a Foucault quote (“The work of an intellectual is not to mould the political will of others; it is . . . to re-examine evidence and assumptions, to shake up habitual ways of working and thinking”). It has songs called ‘Oryx’ and ‘Crake.‘  And although I know in my head that gender is a construct, I don’t know if I felt it in my gut until I heard Olof grimacing “let’s talk about gender bay-BEE” a dozen times while his voice morphs.

Plus the sounds are, viscerally and sonically, just extremely queer. Acoustic and electronic instruments bleed together and stretch out until you can’t tell which is which. Found sounds, ambient noise, and strange mixing decisions take their time; they interact rather than locking in or matching up. “Sometimes I get problems that are hard to solve.  What’s your story?  That’s my opinion.” Or: “Now we have to start. We choose process over everything else. Letting go of outcomes is another privilege.” This is an album that, like the theory it’s based on, prefers to thoroughly explore questions rather than hazard many answers.

Some people think this is all not so great, calling the album “willfully intellectualised,” accusing it of being bombastic and carrying overly long songs and off-puttingly grand and abstract ideas. And it’s definitely not an “easy listen,” especially not compared to Silent Shout, which had, you know, verses and choruses and songs less than ten minutes long. But if you let go and sink into it, and let it take you where it will, you’ll learn some things, feel others, and definitely go somewhere.  And seriously, if you can’t dance to “Without You My Life Would Be Boring,” I don’t want to dance with you anyway.