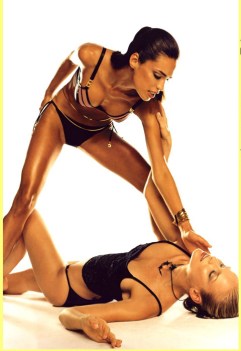 TABLOID:
Every day we have to wade through swamps of tabloid-ready lesbian scandal stories to get to the good stuff, like Don’t Ask Don’t Tell and Promgate 2010 (this just in: Constance was invited to go have prom with the cooler kids in a liberal “activist-type” high school in California). Today we are going to empty our Google Reader because honestly, this week has been a big one for Gay Scandal Headlines, it’s gotten almost 50-50 with other coverage, which is 40% Promgate, and 10% DADT. Consider this list the equivalent of standing in line at the Homosexual Supermarket/Fark, scanning the tabloid headlines:

Bridezilla: In Swansea South Wales, a lesbian spent her wedding night in jail after the 40-year old bride celebrated her civil partnership by drinking 8 pints of lager and champagne, showing her breasts to the doorman, calling him a pervert, and hitting him on the head with her stilleto heel. (@wedding news uk)

Just Like Suicide Girls: The woman who had an affair with Sandra Bullock’s husband also had affairs with other women, which, you can imagine, does wonders for how she’s being discussed in the media. (@examiner)

Lesbian Panic/Psycho: So this guy found out that his daughter was having a lesbian affair with this other woman, and then he killed her and put her body in the freezer! (@foxnews)

GAY JESUS: Texas students doing a play with a gay Jesus character get in big trouble. It was moved from 4 p.m. to 8 p.m. to make it more appropriate. But I hope they know that’s still too early for Adam Lambert to make out with Tommy. At least in public: “A private audience of invited guests and relatives of the cast will be the only people allowed to watch the play, the school said. Critics say the Terrence McNally play, which premiered in 1998 in New York, is blasphemous.”(@chron)

Story About a Twisted Psychotic Terrible Woman or a Story About Homophobia: This never would’ve happened on Muppet Babies: “A nursery manager accused of shaking babies and forcing them to eat vomit claims she is the victim of a hate campaign by colleagues who disliked the fact she is a lesbian.” (@pinknewsuk)

Hot for Teacher: A P.E. teacher and “high-profile sportswoman” in Queensland has been banned from teaching after having a lesbian affair with one of her students. She also asked the student if she thought she was hot and took all the girls on field trips to lesbian bars. She also “gave gifts and fluffy toys – identified as a ‘classic signpost of grooming behaviour,’ along with provocative photos of herself taken in her bedroom.”

SEX! The homosexual age of sexual consent in Guernsey will be lowered to 16-years-old, politicians have agreed. ‘Cause that’s when straight people can do it, so it’s only fair obvi. (@bbc)

Dinah Shore Unbound: I read about Dinah Shore Weekend in the gay press every day, but today I came across an article about it in the mainstream press from 2007, The New York Times. It’s really interesting, there are strippers involved: Daughters of the Dinah, Unbound. (@nytimes)

Runaway Mom: Remember Lisa Miller, the ex-gay Mom who took her kid and disappeared when the court granted custody to her lesbian ex? Well, the Church & Family Council might be the ones housing her. (@lezgetreal)

GAY PROMGATE 2010 — the prologue:
Guess fucking what? Before Constance’s school became the school that wouldn’t let the lesbian go to prom, it was the school that kicked out a transgender student just for funsies, ’cause “Juin’s case was a situation where a transgender student wanted to attend school dressed in feminine clothing,” said Bennett, “and the school district would not even let him attend school.” I think Constance & her gay Mom need to get the fuck out of there!

The reasons for a student’s suspension are supposed to be noted on the suspension form, according to Bennett, but that part of Baize’s suspension notice was left blank. So the ACLU sent a letter to the school on Baize’s behalf asking the school administration for the reasoning behind his suspension— information the ACLU would need in order to challenge Baize’s suspension in court. “But the school would not talk to us about the situation,” said Bennett.

I’d like to point out that all those people who kicked out that kid have jobs, and I don’t.

DADT:
It’s been a year since Dan Choi appeared on The Rachel Maddow Show and came out, which led to the rest of the year when he became Super Activist. He returned to the show to talk about recently being arrested, how he feels about Obama and Gates’ actions and directives, and new adjustments to DADT. Although I’m not sure how I feel about the last minute, from minutes 5-7 you are going to see that this is a legitimately amazing man (and he’s my age!), and that he’s just really, really, really, really right.

I’MMA LET YOU FINISH:
The greatest interruptions of all time; including really the best interruption ever which was indeed Kanye West during the Hurricane Katrina telethon because he spoke the truth!

COMMERCIALS:
“We spend a lot of time ranting about bad advertising, but sometimes it is nice to give credit where credit is due. So thank you, Nike, for illustrating how to properly market your product to women.” (@jezebel)

THAT’S GAY:
The newest episode has tips on how to be a gay politician!