WOMEN IN SPORTS: The Women’s National Basketball League is hemorrhaging money and still hasn’t gained the following it needs to survive. The Detroit Shock (winners of three WNBA titles) are moving to Tulsa ’cause of poor attendance back home. Though this years championship series was lauded as “pixie dust for the league,” that’s only because the Phoenix Mercury handed out thousands of free tickets during the series to fill the stadium.

But Josh Levin at Slate.com has a solution!

It stands to reason, though, that you’re more likely to succeed by marketing your product to people who already like it than by trying to win over people who don’t. Which leads to the second way to address the male-hoops-fan problem: ignore them. The audience for the WNBA is, by various accounts, between 60 percent and 80 percent female. The league also has a major following in the gay and lesbian community, a community that some franchises court and others aggressively alienate. If the WNBA focuses primarily on these fans, they can still have a large enough customer base to survive and succeed.

Did you hear that? That was the sound of someone actually suggesting that a company 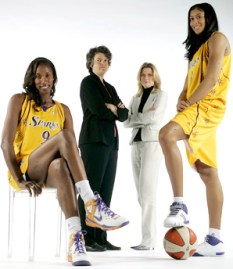 market directly to lesbians — (the actual sound is like gasp + cash register + SWISH)! The WNBA has, from its inception, walked a delicate line with it’s homosexual fans. In fact, when the WNBA launched it marketed a pregnant, married Sheryl Swoopes to put a heterosexual face on its campaign. Swoopes came out in 2005. Earlier this year, controversy erupted when the WNBA’s Washington Mystics came under fire for not installing the popular Kiss-Cam used at other sporting events because “they don’t want to show lesbians kissing.”

A slight upside to the recession is that companies can no longer pick & choose which group to market towards (and of course, the market du jour is always single white men in their 20s/30s) while simultaneously reaping the benefits of the gay market segment happy enough to be let in the door unacknowledged. Just as we search for subtext in books and movies, we search for subtext in advertising, which is, honestly, a little degrading. 72% of gays and lesbians prefer to buy from companies that market directly to them.

What do you think? Do you follow the WNBA? Would you if they sought you out? Do you feel they’ve deliberately ignored lesbians before? The girls are pretty hot, and having women in sports is important, just saying.

CRAFTY: Crafts Gone Wild: “There’s no easy answer to “What’s up with the painting of the naked girl with the mittens and being fondled by a bear?” or “Penis in a Jack-o-lantern, WTF?”For that, there’s regretsy.com. Since its launch last month, regretsy, with its motto, “Handmade? It looks like you made it with your feet,” has become a hall of fame for artistic impulses gone oddly awry.” (@salon)

ALL THE MODERN LADIES:Addressing the Modern Woman: “When Ms. magazine was born, the editors explained, “Ms. is being adopted as a standard form of address by women who want to be recognized as individuals, rather than being identified by their relationship with a man.” That same year, the U.S. Government Printing Office approved using Ms. in official government documents.” (@time)

BIG PINK TAXIS:Mexico’s New Pink Taxis for Women: “Women’s rights activists are aghast at the cars’ sugary presentation and said the service does not address the root of the harassment problem.” (@associated press)

GLASS CEILING: Sexism in the City: The scared mile: “What remains is a nest of frightened mouse-women who negotiate their lives and careers as unobtrusively as possible.” (@timesonline)

WARNING: Autostraddle’s Caribbean Cruise Contest is for a GAY CRUISE. Please do not sue the shipping line because you accidentally went on a gay cruise. (@dailymail)