What is the point of applying for a marriage license you knew you would be denied? You could direct that question at five same-sex couples, all women, who applied for marriage licenses in Hattiesburg, a town in Forrest County in southern Mississippi. In 2004, 86% of voters in the Magnolia State endorsed a state constitutional amendment against same-sex marriage. But over eight years later, lesbian couples in Mississippi still aren’t taking that standing down, as those ten women demonstrated when they showed up at the Forrest County City Clerk’s office on Wednesday.

The campaign had the blessing of the organization Campaign for Southern Equality (CSE), an LGBT rights group based in Asheville, North Carolina. A quick glance at the organization’s home page shows that they’re focusing majorly on the marriage license applications in anti-equality states, encouraging visitors to send the couples messages of support, follow the campaign on their Facebook and Twitter pages and send donations. The protest is part of the latest stage of the group’s WE DO Campaign. CSE describes the campaign as follows:

In January 2013, the Campaign for Southern Equality (CSE) will be traveling across seven Southern states for Stage 4 of the WE DO Campaign. The WE DO Campaign involves LGBT couples in the Southern communities where they live requesting – and being denied – marriage licenses in order to call for full equality under federal law and to resist unjust state laws. 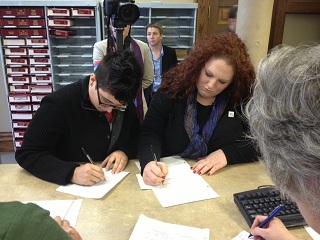 Yet for many of the couples involved in the WE DO Campaign, their reasons for participating are more personal. As WLOX 13 reports, one couple, Sara and Lynn Bell, “are legally married in the state of Connecticut, but they feel it is important to stand for the right to marry in their home state of Mississippi.” Sara Bell herself says, “We struggle with healthcare benefits, we struggle with housing issues, and mortgages and insurance. There is [sic] so many things that a marriage grants to couples that we don’t have the rights to.” She notes that they are a family already but “this piece of paper would protect my family.”

Rolanda Boyd, who tried to marry her partner of nine years Dawn Edwards, put it as “We just wanted to make a stand to let everyone know that we are here too. We are Americans just like everybody else.”

There was a common theme in the stories on the CSE website of other couples who’d been a part of WE DO campaigns, of people who had strong connections to their communities, who may have had the option to leave for a more accepting state – or, like the Bells, actually got married there – but chose to stay where they already were. From a previous stage of the WE DO Campaign, there’s the story of Kathryn Cartledge and Elizabeth Eve, who currently live in Asheville, NC:

We’ve been a couple – a family – for 30 years. We met as volunteers at the Open Door, a homeless soup kitchen in Atlanta…We have worked hard at creating “home” for our daughters, Mary Hart and Bess, our four beloved grandchildren and our community. We live on a small farm in Asheville and are caretakers of 30 dogs, 2 cats, 2 llamas, 2 goats, 5 chickens, a goldfish and 2 pygmy turtles. We live a blessedly simple and ordinary life….We both grew up in the Deep South in the 50’s and 60’s and we lived with the turmoil of discrimination. We learned early on that discrimination hurts those who are discriminated against as well as those holding to the tenants of hate. For us, having equality for the LGBT community is a human rights issue – plain and simple.

This video from CSE specifically details the stories of those involved in this week’s Hattiesburg campaign:

Boyd’s statement that “We are Americans just like everybody else” is likely intended for homophobic politicians and voters in her own state, but could just as easily be applied to urban, coastal gay people who are dismissive of the needs – both political and cultural – of Southern and other red-state queers. As Fonseca reminded us in her fantastic article about being allies to small-town queers, way too much of the gay cultural narrative is about getting out of your small, conservative town – or even state – for a seemingly more liberal, accepting place. This message was apparent from the very beginning of the It Gets Better Campaign, where so many of the videos were about leaving “small-minded” hometowns and states for the big, ostensibly-queer-friendly coastal city. But what if you don’t want to leave? There should be an alternative cultural narrative, for those who don’t want to choose between the place they’ve lived forever and learned to love and acceptance/equality. Especially if the reason one wants to stay is specifically to fix the injustice that’s there.

So having a group like CSE that focuses specifically on equality in the South is a great thing, because national LGBT organizations often ignore Mississippi and similar states under the notion that they are “lost causes,” forgetting that the queer people who live there matter as much as those in coastal cities like New York, Boston or San Francisco. And indeed, an analysis by Nate Silver back in 2009 that projected when each state would have majority support for marriage equality put the Magnolia State dead last, only supporting it in 2024. Granted, Silver’s predictions haven’t entirely held up, evidenced by Maine voters’ decision to ban gay marriage the year (2009) that he projected majority support for it. Regardless, though, Mississippi isn’t exactly leading the way on support for gay rights. 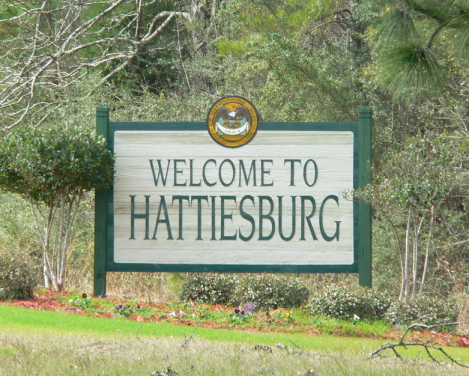 But queer Mississippians don’t necessarily have to wait until 2024. The comparisons to the civil rights movement in the stories on CSE’s website were frequent, and that was one movement where equality often came before a state’s voters wanted it, by focusing federally. Similar to how the 1950s and 1960s civil rights movement focused on Supreme Court battles and federal legislation like the 1964 Voting Rights Act, eliminating DOMA, enacting ENDA and overturning unfair state legislation via the Supreme Court could help to ensure that queers in places like Hattiesburg, MS have the rights they deserve without having to wait for their fellow voters to grant them to them. There is no reason for the LGBT rights movement to leave Southern queers behind, and luckily groups like CSE will fight to make sure that doesn’t happen.

Future protests for this month’s “Stage 4” of the WE DO Campaign are planned for Mobile, AL, Decatur, GA, Morristown, TN, Greenville, SC, various locations in North Carolina, Arlington, VA and Washington, D.C.